Donald Trump’s electoral victory has led observers to speculate on the ramifications for American foreign policy to the Middle East and how regional leaders, from Syria’s Bashar al-Asad, Egypt’s Abdel Fattah el-Sisi to Iranian hardliners, will benefit from his presidency.

However, there has been one Middle Eastern leader neglected in this analysis: the self-proclaimed caliph of the Islamic State of Iraq and the Levant (ISIL), Abu Bakr al-Baghdadi, who will also reap rewards from the election’s results.

The “caliph”, probably in hiding in Syria, has been watching as his territory shrinks.

Despite this loss, the group still has the capability to direct or inspire terrorist attacks internationally. It declared that its violence is meant to destroy “the grey zone“, the sphere of coexistence between Muslim and non-Muslims, whether it be in cities such as Paris or Mosul, where Iraqi Christians and Muslims used to live side-by-side before the former were expelled in 2014.

Trump’s victory, and his plans for a Muslim registry, provides the rhetorical ammunition to ISIL’s claim that there is no grey zone. There is only black and white – white representing ISIL, and the black camp, now led by an incoming orange-haired American president.

ISIL’s view of the US election

ISIL and its supporters watch domestic developments in the United States and seek to leverage them to buttress their narrative. For example, during the Ferguson protests, ISIL used Twitter to recruit African-Americans, and it will exploit Trump’s victory to gain further adherents.

One can deduce how Baghdadi views this upheaval in American domestic politics by examining how like-minded ideologues regarded the outcome.

While ISIL, al-Qaeda, and the Taliban differ over ideology and tactics among themselves, they all celebrated Trump’s success.

The Jordanian preacher Abu Muhammad al-Maqdisi tweeted that Trump “reveals the true mentality of the Americans, and their racism towards Muslims and Arabs and everything.”

Despite Trump's rhetoric vis-a-vis a wall with Mexico, he did travel there in August 2016. He now needs to visit an American mosque, because his strategy to 'knock the hell' out of ISIL will require him to build bridges with Muslims in the US and rethink his ban on Muslim immigration.

Maqdisi was the spiritual guide to Abu Musab al-Zarqawi, the Jordanian foreign fighter who established the Iraqi insurgent group that would evolve into ISIL. Even though al-Maqdisi has disavowed ISIL, he has appropriated its discourse.

During the presidential debates, Trump had criticised the military strategy of the US-backed Operation Inherent Resolve to expel ISIL from Mosul. Yet his electoral victory will have little effect on the military campaign, as the decisive battle for Mosul will continue until Trump’s inauguration, and most probably will not change course once he is sworn in.

Nonetheless, a Trump victory perpetuates ISIL’s narrative, even if it is defeated in Mosul. As ISIL goes on the defensive, its attempts to manipulate the grey zone will only increase.

The American grey zone and the election

A flurry of media reports have alluded to Russian President Vladimir Putin’s role in influencing the elections. Yet media neglected Baghdadi’s role in it.

The rise of ISIL only exacerbated pre-existing Islamophobic trends in the US, upon which Trump capitalised. The San Bernardino attacks, conducted in the name of ISIL, resulted in Trump’s declaration of December 2015 of a “total and complete” shutdown of Muslims entering the US. This campaign rhetoric has buttressed ISIL’s claims.

ISIL would have looked askance, however, at examples of the grey zone persisting during this campaign. Bernie Sanders hugging a Muslim woman during a rally, and promising to fight Islamophobia as a Jew, kept the grey zone alive.

The fact that Huma Abedin is the top aide to Hillary Clinton proved that a Muslim American could achieve great heights in the US political system. It is for this reason that ISIL threatened her and Keith Ellison, a Muslim-American congressman. Both prominent figures undermined ISIL’s narrative.

OPINION: The US is not a post-racial society

Finally Humayun Khan, a Muslim American in the US military killed in Iraq in 2004, proved redolent in symbolism for both sides of the campaign, even in death.

His parents appeared at the Democratic National Convention to blast Trump’s Islamophobia and to demonstrate that a Muslim can be an American patriot.

Yet Islamophobic sentiments continued to strengthen Trump’s position until election, demonstrating that even a Muslim who fought in the US military was not enough to overcome the image of the Muslim as “the other” in the US.

The fallout from Trump’s victory

Trump’s plan for a registry for Muslims in the US is not new, and would follow similar measures implemented under the Bush administration. While the effect of the Trump administration’s plan still remains uncertain, however, there have been tangible effects on Muslim Americans nonetheless since his victory. Women wearing the hijab have been assaulted across the US, and even cases of women removing their hijabs for their own safety.

These events will only substantiate ISIL claims that one cannot practise the Islamic faith in the US or anywhere else in the grey zone.

Despite Trump’s rhetoric vis-a-vis a wall with Mexico, he did travel there in August 2016. He now needs to visit an American mosque, because his strategy to “knock the hell” out of ISIL will require him to build bridges with Muslims in the US and rethink his ban on Muslim immigration.

Telling his supporters to simply “stop it” on TV will not be enough to control the hate he has already unleashed. 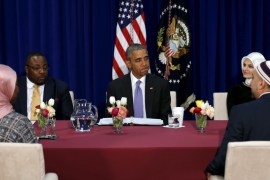