Last week, the Archbishop of Canterbury, Justin Welby, was quoted as saying that religious leaders should “stand up and take responsibility for the actions of those who do things in the name of their religion”.

As the highest authority in the Church of England’s version of Christendom, Welby’s comments are both ill-thought out and dangerous, as they pander to the idea peddled by the “alt-right” (read: neo-fascists), that British Muslims are somehow silent against ISIL terrorism by brushing it off and saying: “Nothing to do with us!”

This cannot be further from the truth, and it is in fact grotesque that Muslims are silenced by the British establishment, only for leading figures of that establishment to ask them to fight the Islamic State of Iraq and the Levant group, known as ISIL or ISIS.

Welby was quoted by The Telegraph as saying that it is time to stop saying “that ISIS is nothing to do with Islam”, referring to the armed group that has been running amok around the Middle East for the past few years.

While he also mentions other religious extremists, including Christian militias in the Central African Republic (CAR) who have committed horrifying crimes against the Muslim population, this is said almost in passing as if to say that all religions are responsible for their own extremists.

According to the Archbishop, people such as Boris Johnson, the British foreign secretary, who tell people to stop referring to the terrorists as the “Islamic State” due to it having no relation with Islam were actually harming efforts to combat ISIL extremism and terrorism.

For once, I actually agree with the foreign secretary. Associating ISIL with Islam grants the terrorists what they want – a degree of religious legitimacy, something which they lack among the overwhelming majority of the Muslim community.

Welby seems to place the onus for combating ISIL primarily on Muslims, a community that has been woefully and intentionally misrepresented not only in Britain, but in other western nations.

Similarly, the Archbishop made no reference to how Muslim voices are almost ritually silenced in the West. Muslims face pressure to conform and assimilate, rather than coexist and integrate.

The British government’s controversial anti-extremism programme, Prevent, seems almost uniquely geared towards targeting Muslims, despite the fact that, according to studies by Europol, most acts of terror are committed by non-Muslim groups. According to the agency, of the 211 attacks in the European Union committed during 2015, 17 were by so-called jihadists.

Rather than making Muslims feel that they can be a part of the solution, and given spaces to interact and speak about issues affecting every citizen, the establishment has overseen a period of social ghettoisation, whereby only extremist Muslims are really afforded a chance to talk.

A prime example of this is the hate preacher Anjem Choudary who created the al-Muhajiroun organisation with a number of former misguided Hizb ut-Tahrir members. Choudary was a figure that was so fringe, that most Muslims did not even know who he was until the British media gave him years and years of airtime to spout his hatred, granting him a platform he and other extremists could only dream of. Even after Muslims began to recognise him, he was shunned by almost every single mosque in Britain as someone who did not represent them or Islam in the United Kingdom.

On the other side of the extremist spectrum are what some in the Muslim community term as “House Muslims”, such as Maajid Nawaz of the Quilliam Foundation, a government-backed group who claim to fight extremism yet are extreme themselves in that they attempt to dilute Islam in contrast to the other extreme of violent terrorists who try to exaggerate and misrepresent Islam as a religion that glorifies violence.

The kind of Islam Nawaz peddles is so watered down to please the establishment that he, too, is ostracised and condemned by many leading figures in the British Muslim community, yet is placed on a pedestal as a representative of “western Islam” by the mainstream media to oppose people such as Choudary, and defended by the likes of right-wing Breibart news site.

OPINION: Who are we to label ISIL members non-Muslims?

This does not mean that Muslims do not have a duty to condemn ISIL and other extremists, of all faiths and no faiths, as that is the decent, human thing to do.

But to ask them to take responsibility as if ISIL or al-Qaeda somehow morphed out of their belief system is the pinnacle of ignorant folly that stokes the fires of Islamophobia, creating further divisions and playing the game that the extremists want open societies to play. 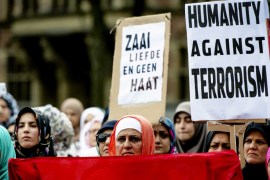 Who are we to label ISIL members non-Muslims?

We may add a qualifier to their label, but never do we deny their chosen identity altogether.