Now that the elections are over, thank God,

What America needs more urgently than anything else,

More than a different President,

and even more than a beautiful terrific wall.

Or at least therapy of some sort.

There’s so much anger in America,

I can understand why so many women are angry,

I understand why minorities are angry.

I can understand the left being angry.

Everything they hold dear is threatened:

Protection of the environment,

They’re losing a world based on reason and rationality.

But why are the Republicans still angry?

They swept the field.

Yet they still sound furious.

Snarling about the media and journalists,

as if that’s what is going to make America great again.

You get the picture?

America is mad as hell,

and can’t take it any more,

which is hilarious to be honest with you, America.

I don’t mean to be insensitive or dismissive,

but you remain the richest, most prosperous, most advanced country in the world,

and you’re still democratic and liberal, the last time I checked.

Really, before you snarl, sneer and scream some more,

about how it’s all gone to hell,

you should spend a week,

in a tent in a Syrian refugee camp.

What is not funny,

is all this growling, howling anger,

from Trump’s associates and appointees.

is being filled by a pack of angry, nipping, snapping

white men with control over trillions of dollars,

with the keys to international stability,

and with nuclear weapons,

dangerous to Americans and others.

Time to send in the therapists

before America’s anger, angers the rest of the world. 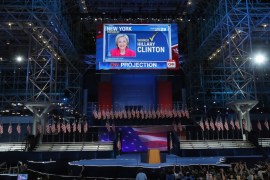 Opinion polls are snapshots of sentiment at a given time, not a foolproof prediction.