On the day the United States President Barack Obama thanked the Greek people for their “extraordinary compassion” in their response to the refugee crisis, I spoke to Haji Mohamad Lound, a Syrian refugee whose experience at the hands of the Greek and European authorities was less than compassionate.

Haji, together with his wife and four young children, was illegally returned from Greece to Turkey last month. “Our situation is desperate,” the graphic designer from Aleppo told me on the phone. “My son has respiratory problems. I cannot find work in Turkey and we do not feel safe. I do not know where to turn.” He kept asking me what the chances were that they could come back to Europe but I was not sure what to answer.

While the welcome given to refugees by so many ordinary Greek people has been extraordinary, paradoxically the further one gets from the beaches of Lesbos and Chios, the more attitudes towards refugees calcify.

Indeed, among those furthest removed from the crisis – in the parliaments of Europe – compassionate words are seldom matched by action.

This is starkly illustrated by the treatment meted out to Haji and his family. They arrived in Greece last month having fled the advance of the Islamic State of Iraq and the Levant (ISIL) in Syria. “After a car bomb explosion shattered the windows of our home I decided it was time to pack our bags,” he told me.

They risked their lives trying to cross to Europe by sea and were rescued and taken first to the island of Milos and then Leros, where they were registered and expressed their intention to apply for international protection.

Five days later, police told them they would be transferred to Athens and they were escorted to the airport by a group of officers from the EU border agency, Frontex. They boarded a plane but instead of flying to Athens, two hours later they touched down in Adana, southern Turkey. “When I saw the Turkish flag at the airport my dreams were shattered,” Haji told me.

Having spent more than a week in detention in Turkey, the family were given temporary protection registration documents and were left to their own devices.

READ MORE: More than 240 refugees die in Mediterranean this week

While the Greek authorities and the European Union have repeatedly insisted that all Syrian refugees arriving in Greece were having their asylum claims properly assessed, the evidence in this case strongly suggests otherwise.

Not only were Haji and his family denied the right to apply for asylum, but no risk assessment was undertaken on the danger they would face if returned to Turkey. They were also denied access to legal advice during the critical hours of their deportation.

As Haji and his family are stranded in Turkey, a further 62,000 refugees and migrants are stranded in Greece, living in a state of constant fear and uncertainty. This is the result of the EU-Turkey migration deal and the failure of European leaders to relocate the promised numbers of refugees from Greece.

Despite Greek authorities’ claims of no foul play, there is a raft of evidence, including the signed copies of documents that prove that the family had formally expressed their intention to seek international protection in Greece.

As Haji and his family are stranded in Turkey, a further 62,000 refugees and migrants are stranded in Greece, living in a state of constant fear and uncertainty. This is the result of the EU-Turkey migration deal and the failure of European leaders to relocate the promised numbers of refugees from Greece.

While in Europe, Obama should shine the spotlight not only on often abysmal conditions for the tens of thousands of refugees stranded in Greece, but also on the failure of world leaders to adequately address the wider global refugee crisis.

As winter closes in and the global political climate grows harsher, President Obama should demand that wealthy countries meet their obligations and take in a significantly greater and fairer share of the world’s refugees.

In the meantime, Haji remains hopeful that the family may yet find a hospitable welcome in Europe and provide their children with an education. “We just want to be in a place in Europe that accepts us, where we feel safe, and where our kids can go to school.” 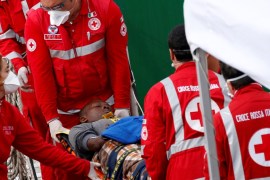