Donald Trump is on a new campaign.

It’s to make himself appear sane.

with a very good demeanour

and the best temperament.

He’s saying it in a very sedate and mild-mannered way,

Since he’s spent the last year

that he can’t keep,

lying to our faces

and claiming he didn’t say things

that we heard him say 10 minutes ago,

this is a very good idea.

that he’s got a track record

going bankrupt and sticking other people with the bill,

without ever showing shame, regret, or remorse.

So his new campaign to appear sane

is a good idea for him.

Especially since his opponent actually got more votes than he did

and he’s going into the presidency with a disapproval rating of 61 percent.

Meaning that more than a few people who voted for him

The media is largely,

co-operating in this venture.

They see him as, and I am quoting,

“subdued,” as the “enormity and gravity” is sinking in.

that “the office is transforming the man”,

and “we should root for him to succeed.”

Because “if he succeeds, the country succeeds.”

Is it because he’s becoming normal?

No. It’s because now he’s in power

and when you have a media

that is completely entwined with the elite,

whatever power says and does

well, it must be normal.

this guy wants to deport

in order to be “the greatest jobs president God ever created”.

George W Bush did exactly that a mere 15 years ago

and got a “jobless” recovery,

the biggest crash since 1929

and the Great Recession.

on the certainty that rising temperatures are making the seas rise.

Not the Environmental Protection Agency. Not Greenpeace.

But Trump insists that’s a hoax,

that it’s Chinese disinformation intended to undermine the American economy,

so he intends to withdraw, immediately,

from the Paris agreement on climate change.

So he’s going to have a new, mild-mannered demeanour?

to hold down his thumbs

at three o’clock in the morning.

It’s not his tweets you need to fear.

because they are mostly dangerous, bad, and frankly, mad.

If he succeeds, it will be the ultranationalists, racists, fascists that will succeed

And, of course, as always, the super-rich, the world over… 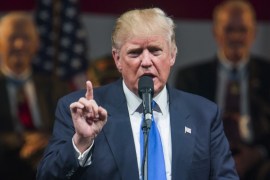 US election: What happened? 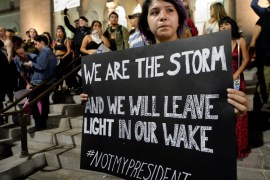 To some, ignorance is bliss

Human rights will not be of much a concern to the Trump administration.