Everyone is wondering how it happened. How could Donald Trump, a symbol of everything the US has supposedly worked to undo in its spoiled past, become its leader?

News outlets agree on one aspect of the answer: Election coverage splashes headlines that call this moment a working-class uprising, an outburst in response to economic inequality. The truth?

A growing working class of colour

Trump’s working class comes right out of the long-standing ideology of the deserving poor, framed in this election as the white industrial worker disenfranchised by NAFTA. The corresponding undeserving poor are the immigrants and people of colour who are stealing jobs and opportunity from him. White people view themselves as the deserving. People of colour, on the other hand, are viewed as pathologically criminal: border jumpers, thugs, or terrorists.

Breaking down the numbers further, poverty impacts communities of colour at a much higher rate than it impacts whites. In 2014, 10 percent of white America fell under the poverty line, in comparison to 26 percent of blacks, 23 percent of Latinos, and 12 percent of Asians.

This is not to say white poverty is a myth or that trade policies in this country haven’t gutted industrial and agricultural communities; it is real and there is no question that they have. Much of post-industrial America lacks basic infrastructure and badly needs resources such as access to healthcare and sustainable jobs.

Keeping workers of colour down

But this reality is not why white people voted for Trump. And rural whites aren’t the only ones who supported him. As the country grows increasingly diverse, rural areas along with suburbs have seen an influx of people of colour: both newly arrived immigrants and long-time residents who move from cities for a lower cost of living.

The New York City suburbs of Nassau and Suffolk counties on Long Island have seen a major rise in black, Latino, and Muslim enclaves, as people of colour experience class ascendance and as working-class minorities – who are priced out of an increasingly expensive New York City – settle just outside city limits.

Long Island hosted several rallies in support of Trump with up to 10,000 people in attendance. One of these rallies was held yards away from where Marcelo Lucero, an Ecuadorean immigrant, was killedin 2008 in what the police concluded was a hate crime. Suffolk County, which has an average household income of $88,000, a third higher than the national average income, is also home to a swelling Ku Klux Klan membership. These places are not the Appalachian hollers or depressed factory towns depicted in election coverage, but they are Trump territory.

Not only does proximity to communities of colour make white people feel generally uneasy, it makes them feel insecure. Despite consistently earning less than their white counterparts, people of colour have experienced comparative gains in income while white people – white men in particular – have remained economically stagnant. In other words, the gap has narrowed even as it remains pronounced.

Trump’s grandiose economic policies won’t especially help white people get more jobs or better jobs. But they will absolutely undermine and suppress any gains, economic or social, made by people of colour.

And that’s what a Trump vote means: It’s not about bringing up white people; it’s about keeping people of colour in their place. It’s about ensuring that even if the deserving poor never get what they need, at least the undeserving poor will get less and less.

It is dangerous to affirm the narrative of the working class as a white monolith. It erases the reality of many poor and working people of colour across the country. It creates a false pretence that racial minorities aren’t living outside city centres, in “Trump Country” – and as a result, aren’t receiving the brunt of vitriolic hate that’s become increasingly normalised just in the past few days.

Conversely, it makes the assumption that all Trump supporters are working class when that has been proven to be false time and time again. It is dangerous to imply that Trump’s policies can or will do anything in the interest of the working class rather than in the interest of assuaging white fear. Worse yet, it delivers on Trump’s promise to white America: that white people are the embattled, the justified, the deserving.

Lena P Afridi is an independent writer who specialises in income inequality and racial and economic justice. She holds a Masters in Regional Planning from Cornell University. 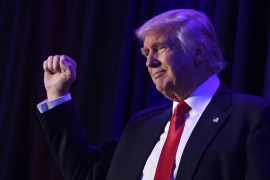