Many Americans woke up on November 9 (or didn’t sleep to begin with) panicking about the future of the United States.

Citizens of other countries, particularly in the Arab world, were probably observing this mass panic with a smirk, thinking, “and now it’s their turn”. Certainly, not out of spite, but in the hope that Americans would finally understand where they were coming from.

The reality is, citizens of the US – minorities or otherwise – do have reasons to feel fear and disgust under a Trump presidency, not only from his proposed policies of alienation and repression, but also from those supporters of his, whose white power aspirations have now been made official.

However, it is also true that citizens of the US, particularly Arabs and Muslims, must not allow this election result to force them to act as frightened children.

Murmurs of migrating to Canada if Trump won apparently translated into reality, with the Canadian immigration website reportedly crashing as it became clear the electoral college votes were in his favour.

These reactions make one pause and wonder how long these same people would last under the Arab and African dictatorships and occupiers the US has propped up and maintained positive ties with over the years.

We now have a version of a “dictator-elect” in the US, and rather than promising to fight the changes he has threatened to implement, the initial reaction of many Americans has been to plot ways to flee.

Honestly, the arrogance of Americans who are threatening to flee is breathtaking. They assume that the world will now welcome them with open arms because in a few months, they will be ruled by a less-than-desirable leader. One which, the world will be quick to mention, was actually chosen by Americans and not imposed on them by occupation or intervention.

As young elementary school pupils in the US, we are programmed during our “social studies” classes to hold our civic duties, such as voting and obeying laws, near and dear.

In middle and high school and even college, we run for “political office”, setting up small governments within our schools that give us an illusion of holding power.

Even naturalised citizens of the US go through a political socialisation process; one that details their rights and responsibilities as a citizen of the US and reminds them that citizenship is a promise to commit to the US and its form of government.

Yet, all of this political socialisation has apparently left us unprepared to deal with the sometimes unexpected and undesirable outcomes of the US’ version of democracy.

In fact, our reactions to the results of the 2016 election have shown us exactly how our political socialisation has failed us and made us complacent and passive rather than proactive members of our political system. But this is only one small symptom of our political immaturity and decay in the US.

Contrary to what we may believe, we Americans aren’t the centre of the universe. Our country’s policymakers are often the cause of suffering overseas – the very suffering we are fearful of at the hands of Trump – but, as citizens, we tend to take one of two paths.

We either shy away from taking responsibility, blaming it on elected officials and claiming we aren’t responsible for their missteps in the Middle East and North Africa region, or we don’t even have a clue about the kind of suffering our policies contribute to.

Worse than that, we are quick to judge what Arabs and Africans should and should not do while living under dictatorships as we are sitting comfortably in the democracy we love to shove down other countries’ throats.

Americans have a hard time fathoming why Syrians would “abandon their country” and run from barrel bombs or why Egyptians would run from the threat of forced disappearances. We accuse refugees of “putting the lives of their children at risk” by getting into overflowing boats to escape extremism of all kinds – Islamic or otherwise -judging them harshly for these choices.

Yet, one little brush with a leader who might put us in a position even remotely close to citizens living under Bashar al-Assad, or Abdel Fattah el-Sisi, or the Islamic State of Iraq and the Levant, and we want the entire world to not only understand our urge to flee but also to coddle us and be concerned about our feelings.

A US under Trump is not going to be pleasant, on that we can agree. However, it is not the first time minorities were targeted and unwanted in the US.

African-Americans at some point in history were denied citizenship and their movements restricted. Japanese-Americans were actually placed in internment camps on US soil.

Even ideology has been a target of US government – for example, the First Red Scare. Yet, despite this, members of these groups did not flee the US in droves.

We have had months to digest that Trump had a chance at this race. We knew minorities would be facing some type of backlash. For some reason, however, we continued to arrogantly think that a Trump presidency couldn’t happen to us here in the US.

But it did, and perhaps that is what will finally force us to address and understand what it is about our political system that finally brought our aggression abroad to haunt us right here at home. 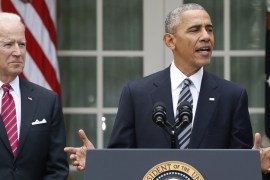 Obama on Trump: We are all now rooting for his success

Outgoing president pledges smooth transition to a president-elect who has vowed to undo many of his top initiatives.