The Georgian people go to the polls today in the nation’s parliamentary elections. The outcome of these elections will probably determine the country’s direction of travel for the foreseeable future.

These are the first parliamentary elections since the Georgian Dream coalition swept into power in 2012 pushing the United National Movement into opposition after almost a decade in power.

It remains to be seen how the elections will turn out this time. Whatever happens, and whoever takes over the reins of power, must keep Georgia on its Euro-Atlantic path.

After the charismatic former Georgian President Misha Saakashvili and his United National Movement party were removed from office many people were expecting the worse to happen.

First, there was a concern that Saakashvili would not leave without taking to the streets. Instead he rightfully acknowledged the will of the Georgian people and gracefully handed over power.

This is a rare feat in the post-Soviet space and it placed Georgia firmly on the map as a democratic nation in a region where democracy is often lacking.

Next there was a concern that the newly installed Georgian Dream coalition would undo the years of work bringing Georgia closer to Europe and the United States. Again, the opposite proved to be the case.

As someone who had been following and visiting Georgia for almost a decade, I have to admit I was concerned too – but have since been pleasantly surprised.

As Georgia approaches elections this weekend it is safe to say the country remains firmly committed to Euro-Atlantic integration under the current Georgian Dream coalition led by Prime Minister Giorgi Kvirikashvili and President Giorgi Margvelashvili.

Not only has it deepened its drive for Euro-Atlantic integration it has also advanced the democratic accomplishments started under the United National Movement.

For example, in 2016, Georgia signed an Association Agreement with the EU, and just recently, in September 2016, a European Parliament committee voted to put Georgia’s application for visa-free travel in Europe high on the EU’s agenda.

Georgia has been able to integrate further into the Euro-Atlantic community while balancing regional challenges such as Russia, Iran and the growing influence of China.

On the security front, Georgia perhaps has the closest relationship with NATO possible without being a full member. The Substantial NATO-Georgia Package agreed at the 2014 NATO summit in Wales and has done a lot to improve the capabilities of the Georgian Armed Forces.

At the height of the war, Georgia had almost 2,000 soldiers in Afghanistan, making it the largest per capita troop-contributing nation in the coalition.

Today Georgia maintains 885 troops in the country. This is the third-largest contribution after the US and Germany. Moreover, Georgia currently contributes an infantry company to the NATO Response Force.

Perhaps most importantly, Georgia has been able to integrate further into the Euro-Atlantic community while balancing regional challenges such as Russia, Iran and the growing influence of China. This has been no easy task.

Both Russia and Iran have long competed for influence in Georgia. At different times throughout history each has occupied or ruled what is modern day Georgia.

Georgia has been able to maintain cordial and mutually beneficial economic relations with Iran and even participate in regional energy projects.

Eight years after the 2008 Russian invasion Moscow still illegally occupies 20 percent of Georgia’s territory. Where possible Tbilisi has taken a pragmatic stance with Russia by trying to decouple the issue of Russian occupation from advancements in low-level trade and economic activity that benefit the region’s local population.

Georgia has also wisely made a “non-use of force pledge” when it comes to restoring the country’s territorial integrity, which includes Russian-occupied South Ossetia and Abkhazia.

If Georgia is to integrate fully into the Euro-Atlantic community it is better that they do so with little or no problems with its neighbours.

Georgia is also quickly becoming a key part of the modern-day Silk Road. Tbilisi has courted Chinese investment and is quickly emerging as an important hub for Eurasian economic activity. In fact, this week negotiators finalised a Georgian-Chinese Free Trade Agreement that will go into force next year.

So why does any of this matter to the West?

If Georgia is to integrate fully into the Euro-Atlantic community it is better that they do so with little or no problems with its neighbours.

In the case of Russia’s illegal occupation of South Ossetia and Abkhazia, this is easier said than done. In terms of Georgia’s relations with Iran and China, western policymakers should not be alarmed, but instead should realise that this is a consequence of Georgia’s geography and history.

Georgia is an island of democracy and stability in a very dangerous region.

Without a doubt Georgia’s future is in the West. Whichever party comes out on top after this weekend’s elections must keep Georgia on the Euro-Atlantic track.

There is too much at stake otherwise. Not only for Georgia, but also for the broader region and the Euro-Atlantic community. 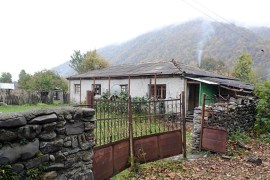