Today millions of Moroccans will head to the ballot box to vote in parliamentary elections to select politicians for 395 seats in the House of Representatives. In the run-up to election day, the war of words between the main rival parties – the incumbent PJD (Party of Justice and Development) and the Party for Authenticity and Modernity (PAM) – has escalated, with the Islamist PJD claiming that their main rival, the PAM, is favoured by the state, and the latter stating that the PJD has been spreading extremist ideology throughout the kingdom.

Thirty parties have fielded candidates in what will be the second legislative elections since the protests of 2011. Yet only four or five parties have a strong electoral base and are expected to win a sizeable number of seats –  namely, the incumbent PJD, the rising PAM, the Istiqlal Party (founded in 1944), the Popular Movement, and the Party of Progress and Socialism.

Following the elections, the winning party will have to build a coalition as Moroccan electoral laws prohibit any one party from achieving an absolute majority. Thus after the voting there will be weeks of political wrangling as a new government is formed.

The PAM party was founded in 2008 by Fouad El Himma, a close adviser to King Mohammed VI. The PAM does not have a clear ideological stance – it claims to be “democratic and modern” – and is supported by prominent business leaders.

By most accounts, the PAM was established to counter the growing influence of the Islamist PJD, which has been making electoral gains since it won eight seats in the parliamentary elections of 1997.

The Islamist party went on to win 42 seats in September 2002, and 107 seats in November 2011, after which Abdelilah Benkirane, the party leader, was named prime minister of Morocco.

Since its founding, the PAM has also been building support, particularly among liberals and economic elites, winning roughly the same amount of votes as the PJD in the municipal elections of 2015.

Morocco’s new constitution, passed by referendum in 2011, whittled down some of the king’s powers – granting the prime minister the right to appoint new officials and to dissolve parliament, powers previously held by the palace.

A constitutional amendment also states that the king must choose a prime minister from the party that receives the most votes.

The king also reserves the right to play the role of a powerbroker in party politics. The PJD is seen as challenging the political and religious authority of the palace. For months Prime Minister Abdelilah Benkirane has denounced the palace’s attempts to steer the PJD through “remote-control politics” (“attahakum”).

Long-standing tensions between the PJD and the palace have now erupted into full view.

Long-standing tensions between the PJD and the palace have now erupted into full view. Last month, Omar Ramid – the minister of justice and a PJD member, wrote: “Three weeks before October 7 elections, weird and strange things are happening.”

PJD supporters accuse the ministry of interior of organising a protest in Casablanca on September 25, where protesters denounced the PJD’s “Islamisation of Moroccan society”.

And then an Islamist candidate allied to the PJD was barred from running for office in Marrakesh because of his alleged hate speech (while a dozen or so Salafi candidates who had been banned from political office also because of hate speeches are now permitted by the ministry of interior to stand for office.)

In recent weeks, several PJD members have also been caught in highly publicised scandals involving drugs and land-grabbing. The ministry of interior disavows any ties to the anti-PJD gathering in Casablanca, and to exposing recent scandals.

The PAM’s candidate and secretary general Ilyas El Omari has likewise denied any unsavoury links between the palace and his party, claiming that the king’s advisers are associated with various parties and not just the PAM.

He has also accused the PJD-led government of allowing for the radicalisation of youth, particularly in northern Morocco, and called for an investigation of the “state-accredited associations” that spread such ideology.

Benkirane, in turn, rebuffed Omari’s accusation (“Can he name any of these associations?”), adding that he does not consider the PAM a political party because it is “manipulated”.

Public opinion polls before elections are banned in Morocco for fear of swaying voters towards one party or another, yet the PJD is favoured to win, largely because of its support base in urban centres and in lower-income areas.

This is ironic given that the PJD’s policies of subsidy cuts and pension system reform, and its freeze on government jobs, has disproportionately affected the urban poor.

Across the country, unemployment remains high (20 percent for youths between 15-24), and corruption is still rampant (Morocco fell from 80th to 88th place in Transparency International’s index of 175 countries).

PAM leaders are also quick to point that the PJD promised 7 percent growth and delivered a growth rate of 1.5 percent – claiming that, if elected, the PAM will create 150,000 jobs per year. They may soon have a chance to deliver on this promise. 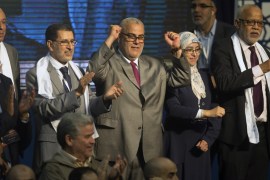