You could say that Egypt has had its very own Watergate. But unlike its American counterpart, this was not about tapes and spying and political scandal, but about water, a refrigerator and scandalised social media.

At the first National Youth Conference in the upmarket resort of Sharm al-Sheikh, Egypt’s president Abdel-Fattah el-Sisi demonstrated to young Egyptians how he was “one of them” by informing them that, despite being the son of a wealthy merchant , “I lived for 10 years with nothing but water in my fridge“.

To many Egyptians, an empty refrigerator is a sign of affluence, as it could well indicate that its owner is well-off enough to eat out or order in. Besides, when Sisi was young, fridges were luxuries and so possessing one only to chill water would have struck many of his contemporaries as an extravagance they could ill afford.

But this is obviously not what Sisi intended. The president’s comments sought to inspire young Egyptians to aspire to achieve great things for themselves and their country through “self-esteem” and “independence”.

But rather than motivating citizens to pull themselves up by their bootstraps and tighten their belts – with the poor doing the majority of the tightening – his comments caused social media to erupt in guffaws of laughter.

Like his two predecessors, Sisi is prone to making memorable gaffes and Egyptians, who use humour to shield themselves against the unbearable reality of seeing their country fall apart, mock such pompous soundbites bitingly.

One wit on Twitter likened the Egyptian president to Sponge Bob because he could survive on a diet of water. Employing the “one careful owner” format of advertising, another user pretended to sell a refrigerator on Twitter which, he said, had been owned by the “doctor for philosophers“.

This is a far cry from the Sisi-mania that gripped millions of Egyptians when the former general ousted his unpopular predecessor Mohamed Morsi, who still languishes behind bars on trumped up charges.

Sisi’s initial appeal was constructed on a studied mystic of impenetrable silence, an illusion which was quickly shattered by his increasingly eccentric and unfathomable pronouncements.

The initial enthusiasm of many Egyptians to this self-appointed leader, whom they believed would be a strongman who could steer Egypt to safety and security, has given way to growing unease, alarm and opposition to Sisi’s repressive , arbitrary and increasingly erratic model of governance.

Thousands of Muslim Brotherhood members and secular activists, including many of the leaders of the 2011 revolution, are in prison, while freedom of expression and assembly have been seriously curtailed.

Beyond authoritarianism and oppression, there is the economic bottom line. Exhausted by the upheavals of revolutionary change and counter-revolutionary inertia, many Egyptians were willing to turn a blind eye to Sisi’s myriad abuses and brutality, buoyed by his pledge of security, stability and, above all, prosperity.

Instead, the economy has continued to nosedive, as reflected in the devaluation of the Egyptian pound and the shortage of hard currency, which has seen the dollar exceed 16 Egyptian pounds on the black market .

This highlights both Egypt’s economic ill-health and the unfairness of the global trading system, based as it is on “reserve currencies”, which can easily cause a crisis in smaller economies to spin into a catastrophe.

Of course, not all of this is Sisi’s fault. Like Morsi before him, Sisi inherited a poisoned chalice from three decades of Hosni Mubarak excess and mismanagement – cloaked in neoliberal hocus-pocus which gave the illusion of growth even while the economy tanked and wealth was concentrated in ever fewer hands.

In addition, the negative feedback of Egypt’s various crises, especially terrorism and insurgency, has led to the drying up of many of its main exports, most notably tourism, the levels of which have hit record lows.

However, Sisi has made matters considerably worse. In fact, it is hard to imagine a less productive path out of Egypt’s economic malaise than that pursued by the current president.

Instead of focusing on bread-and-butter sectors, getting the wheels of industry turning again or addressing Egypt’s numerous social and environmental challenges, he has spent his presidency herding white elephants, including the aborted idea of building a new capital city.

Sisi’s first mega-project, the widening of the Suez Canal was bound to run into dire straits. In its first year of operations, revenues from the expanded canal remained largely stagnant.

Billions are also being wasted on a nuclear power white elephant , when the resources could be better channelled into more effective means to shore up Egypt’s energy shortage.

The president’s difficulties are being exacerbated by the gradual shrinking of Arab assistance. Although Egypt has relied on foreign aid to varying degrees since the Free Officers came to power in 1952, the years since the 2011 revolution have seen Egypt receive an unprecedented flow of aid from the Gulf allies of the moment, with inevitable strings attached.

However, tumbling oil prices and Egypt’s wish to steer an independent course from its allies are leading to the drying up of this source.

After years of teetering on the edge of the abyss, I fear that Egypt’s economy is close to free fall. For the sake the country, I hope Sisi and his government have some real ideas about how to bring Egypt back from the brink. 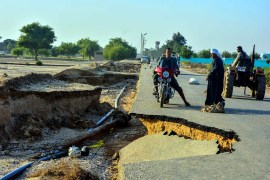 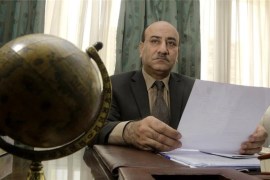