The only way to really understand Donald Trump is to think of him as a Frankenstein creation.

That is Trump the Political Phenomenon. Not necessarily Trump the Person.

He is crude, mean, and lewd. So offensive that we can turn to members of his own party to describe his faults. Senator Lindsey Graham called him a “race baiting, xenophobic, religious bigot”.

Barbara Bush, the wife of one president and the mother of another, said, “I mean, unbelievable. I don’t know how women can vote for someone who said what he said about Megyn Kelly, it’s terrible.”

God’s gift to US comedians

At the start, The Donald, with the world’s most bizarre comb-over and his orange tinted complexion, his bragging, boasting and bloviating, appeared to be the greatest gift God had ever given to America’s comedians. Who would actually support such a clown?

Then he blasted through his primary opponents. Why did people support him? After the first debate against Hillary Clinton, the New York Times described him, quite accurately, as “a vacuous bully”, with “nothing truthful to offer…” who “has lied compulsively since he entered the race”.

So how is it possible that he could actually be elected president of the United States?

We return to the good Dr Frankenstein. To create his creature he scavenged parts from other bodies. When each of those parts were still attached to the body they came from they looked ordinary and normal.

Even more so when those bodies were properly garbed in a suit and tie, wearing shoes and socks. But when sewed, bolted, and glued together to make this new creature, they were suddenly seen as bizarre and threatening.

So it is with Trump, the Political Phenomenon. He’s taken the most vital body parts of being a Republican, and stuck them on himself.

On an ordinary living Republican, dressed in standard slogans and the prevailing platitudes, the parts would have seemed familiar and ordinary. But when Trump lurched manically to centre stage, the parts suddenly appeared grotesque, gigantic and threatening.

Let us look first at his racism and xenophobia.

Liars telling lies for their own advantage makes sense. What is strange is the desire of listeners to prefer lies.

When Republicans try to distance themselves from the embarrassment of Trump, they always say they are “the party of Lincoln”. That’s true, but only in the narrowest sense.

In 1860, when Lincoln was elected, his Republican Party was not merely anti-slavery, it was for modernity, for public investment in infrastructure, technology, and public education. It was pro-labour, given the standards of the day, and its base was in the North.

The South hated all they stood for and seceded. That resulted in the Civil War. The South lost.

For the next 100 years, white Southerners were the staunchest Democrats in America. No way they would vote for a Republican. Until Lyndon Johnson, a Democrat, pushed through the Civil Rights Acts of 1964 and 1965.

OPINION: An Introduction to Trumpology

Kevin Phillips, then a Republican strategist, wrote that, “the Negrophobe whites will quit the Democrats and become Republicans”.

But how to go about it? The trick was to use code words. Lee Atwater, adviser to presidents Reagan and George HW Bush, and chairman of the Republican National Committee, was absolutely explicit about it, “You start out in 1954 by saying, ‘Nigger, nigger, nigger’. By 1968 you can’t say ‘nigger’ – that hurts you. Backfires. So you say stuff like forced busing, states’ rights and all that stuff.”

It still signalled to the racists who was on their side, yet allowed voters who didn’t want to identify that way to pretend, to believe, they were truly voting issues on like “law and order”.

In 1968, Richard Nixon adopted “the Southern Strategy”. It worked. Not just for Nixon. By 1995, the Solid South had become solidly Republican. However, it was two-way street. The party of Lincoln turned itself inside out. It was not just racism. It became the party that opposes science, that denies evidence, that fights social change, the party of “No”.

When Republicans express outrage at Trump’s racism, they are being disingenuous or self-deluded. Yes, it is supposed to be dressed in enough euphemism to ensure deniability. But it is an essential part of their brand. Without that key ingredient they’d lose almost all their elections. It is, in fact, necessary for their survival.

Romney was outraged that Trump “said he saw thousands of Muslims in New Jersey celebrating 9/11. Wrong, he saw no such thing. He imagined it”.

This is directly in the tradition of Ronald Reagan. Reagan loved the tale of a heroic airman who, he said, had won the Congressional Medal of Honor. But it had never happened in reality.

Reagan had seen it in a movie. He claimed to have been at the liberation of German concentration camps. But during the war, he’d never left Hollywood. He’d only seen them in newsreels.

Reagan never paid any penalty for confusing fact and fiction. Thus, he’s the one who deserves the credit for breaking the stranglehold of actual truth in political discourse.

Reagan never paid any penalty for confusing fact and fiction. Thus, he's the one who deserves the credit for breaking the stranglehold of actual truth in political discourse.

It was not just politicians who embraced the freedom from facts.

In 1987, under Reagan, the Federal Communications Commission stopped enforcing the Fairness Doctrine. Suddenly able to present an alternate reality without fear of contradiction, Right-wing talk radio took off.

Then, in 1996, Fiction as Fact, took a leap as gigantic as the Moon landing, Fox News. It was designed and run by Roger Ailes, a Republican political operative. Disguised as a 24-hour-a-day cable news network, it churned out relentless conservative propaganda. It’s slogan was “Fair & Balanced”. One of their stars, Bill Reilly, calls his show the “No Spin Zone”, when it’s all spin, and obviously so.

What the electorate wants

Liars telling lies for their own advantage makes sense. What is strange is the desire of listeners to prefer lies. Yet during the Republican primaries, the more lies a candidate told, as measured by PoltiFact, who tracks such things, the more popular they became. With Trump ultimately running away with the field. Because that’s what the electorate wanted.

Here too, the party had set the precedent. In 2004, George W Bush, who had evaded combat by pulling strings and who may have missed most of his military service entirely, ran against John Kerry, who had a Silver Star, a Bronze Star, and three Purple Hearts. Republican operatives launched a campaign of slander, insinuations, and outright lies. It was ridiculous. It was a war against reality. It was successful.

Barbara Bush was against Trump because he was rude to Megyn Kelly. Kelly is very stylish, looks good on camera and is probably quite intelligent. But she is part of the Fox News machine where false is true, fiction is fact, and Donald Trump can flourish.

Also, like other female on-camera talent at Fox, she has been required to present herself as a sex object, wearing short skirts, sitting on furniture specifically designed to have cameras acting like 12 year old boys, trying to sneak a peak up her thighs.

It has recently been revealed that this was more than a mere matter of style. Roger Ailes, and presumably other members of senior management, pressured women at Fox to have sex if they wanted success, threatened their careers if they refused, and acted on those threats.

So Barbara Bush was admiring and defending the real bastion of sexism and chauvinism.

When it became clear that Trump would win the nomination, Lindsey Graham said: “My party has gone batshit crazy”. True.

But Lindsay, look around, it’s not Trump who made it that way. Trump just picked up all your party’s favourite parts and stuck them on himself. Sure, he may be the monster. But your party is the Dr Frankenstein that made him possible. That made him inevitable. 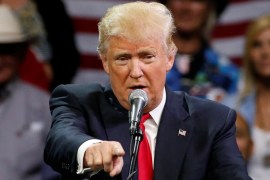