What is the Nobel Prize committee thinking? They gave their Peace Prize to Barack Obama about eight years ago when he had just come to office and they just gave their literature prize to Bob Dylan now that Obama is about to leave office and the world is aghast at the prospect of either a Hillary Clinton or a Donald Trump presidency.

Is there a message in such timing? Has the 18-member Swedish Academy detected something in our time this time that they had misplaced in Obama last time?

Have they in their wisdom noted the depth of despair in the United States and the spectacle of this year’s presidential election, when ignominy and corruption have competed to the finishing line of a frightful prospect of fascism?

When they gave the Nobel Peace Prize to Obama it was a time of unsurpassed hope in America. This is a time of frightful despair.  That hope proved to be woefully futile and misplaced. This despair is deeply rooted, lasting, and deepening.

Blowin’ in the wind

In now legendary songs such as Blowin’ in the Wind (1963) and The Times They Are a-Changin’ (1963) Dylan became a critical voice in the shaping of the American Civil Rights and anti-War movement far beyond the political boundaries of the United States and deep into the farthest removes of its imperial reach.

The opening stanza of Blowin’ in the Wind became something like the national anthem of the anti-war protests:

Bob Dylan was and remains the towering icon of an age of protest, defiance, and disobedience.

How many roads must a man walk down

Before you call him a man?

How many seas must a white dove sail

Before she sleeps in the sand?

Yes, how many times must the cannonballs fly

Before they’re for ever banned?

The answer my friend is blowin’ in the wind

The answer is blowin’ in the wind.

This was a time when body bags were brought home on national television – so when Dylan (straight from the tradition of the folk musician Woody Guthrie) sang:

Yes, how many ears must one man have

Before he can hear people cry?

Yes, how many deaths will it take till he knows

That too many people have died?

Millions of people were listening and singing along with him. Have eight years of uninterrupted wars of Obama’s presidency taught the wise men and women of the Nobel Prize a lesson to go back to the deepest reaches of American lyrical defiance of their politics and look for solace, if not hope?

Obama was falsely believed to be the promise of those brave uprisings.

Dylan is the evidence of a sustained struggle that is anything but over. Look at Fergusson, Black Lives Matter, and beyond: perhaps it has just started.

Has the Nobel Prize committee had reasons to listen carefully to the lyrics of The Times They Are a-Changin’?:

And admit that the waters

Around you have grown

And accept it that soon

You’ll be drenched to the bone

If your time to you

Then you better start swimmin’

For the times they are a-changin’.

Have they watched the depth of corruption of US politics in the course of this presidential election and began singing with Dylan?:

Don’t stand in the doorway

Don’t block up the hall

For he that gets hurt

Will be he who has stalled

There’s a battle outside

And it is ragin’

And rattle your walls

For the times they are a-changin’.

Bob Dylan (original name Robert Allen Zimmerman) was and remains the towering icon of an age of protest, defiance, and disobedience. Nixon’s presidency and his war criminal Secretary of State Henry Kissinger brought the corruption that was the target of Bob Dylan’s protest songs to an ignominious end.

A short interval of President Gerald Ford’s inconsequential term in office and Jimmy Carter’s defeat by Ayatollah Khomeini’s hostage crisis ushered in the horrors of the Ronald Reagan presidency and from then on with every State of the Union address American politics shifted more and more to the right until this very day, when a charlatan thug like Trump and a corrupt corporate lackey like Clinton are competing to become the next president of the United States.

Eyebrows are raised today as to why a singer and songwriter should receive a Nobel Prize in literature. There is absolutely nothing wrong with that. In his lyrics and protest songs, Bob Dylan is one of the last remaining icons of a period when songs mattered, ideas were important, art had a purpose beyond the “culture industry”, and when public happiness spoke of some genuine hope for the trembling heart of this miasmatic empire.

After all, what did T S Eliot, Gabriel García Marquez, Samuel Beckett or Toni Morrison, who received the same prize before Dylan, do other than delve deeply into the heart of the beleaguered world and reach for a fusion of critical hope from the depths of despair?

Bob Dylan was the poet laureate of his generation. He did not just dismantle the hypocrisy of the right, he also rescued the stagnant left from useless pamphleteering and ushered in a robust lyricism of protest as his kindred soul Mahmoud Darwish was doing in Palestine, and Faiz Ahmad Faiz in Pakistan, Nazim Hikmet in Turkey, Ahmad Shamlu in Iran, Vladimir Mayakovsky in Russia, and Pablo Neruda for them all.

Is there hope for a new generation of Americans now to rediscover Dylan? As I have always said, the worst thing about the United States is that there is always hope for it. 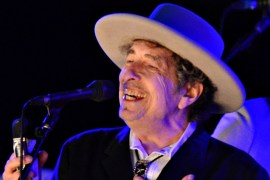 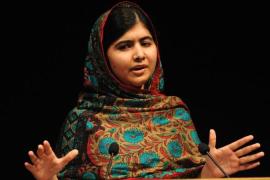