Palestinian President Mahmoud Abbas can no longer think outside his self-imposed bubble, thus he is constantly trying to reiterate his credentials as “a peace partner” to Israel as well as his commitment to combating “terrorism and extremism”.

The fact that Israel is waging a daily war against the Palestinians, who are subjected to all forms of terror by the Israeli army and settlers, does not seem to get in the way of his well-rehearsed refrain.

Not that he is unaware of the reality around him, as the problem runs deeper than a mere state of oblivion. Every time Abbas speaks, his words underscore the deeper crisis of a besieged and subservient mental state that the erstwhile leaders of the Palestinian revolution have locked themselves into.

The tragedy is that neither Abbas nor the Palestinian Authority (PA) are trying to break out of the trap, carefully woven around them by the 1993 Oslo Accords and all subsequent agreements. Instead they are pathetically clutching to the trappings of a powerless authority.

In his latest speech on Tuesday, Abbas went as far as claiming that preserving the PA is a nationalist priority – a strange statement considering that his very presence in Bethlehem to take part in the Christian Orthodox celebrations of Christmas would not have been possible without the approval of the Israeli occupation authorities.

There is no doubt that Abbas’ insistence on sustaining the PA is largely a matter of self-interest – not only his own but that of a Palestinian elite that flourished under Oslo. This elite includes a network of past and present Palestinian officials, part of the intelligentsia and even many in non-government organisations.

There is no doubt that Abbas' insistence on sustaining the PA is largely a matter of self-interest - not only his own but that of a Palestinian elite that flourished under Oslo.

The problem is that many in this elite have internalised the driving idea behind the series of agreements with Israel since Oslo, that Palestinian good behaviour could earn Palestinians international “respectability” and a state.

Therefore, the so-called Israeli security requirements – that Israel and the United States insist upon including in every accord especially in the Hebron protocols, the Wye River Memorandum and the Road Map for peace – have become the principle measure of “Palestinian civility” and commitment to peace.

In practice these ever-renewed and redefined security requirements have been an excuse for appropriating lands, building illegal Jewish settlements, displacing Palestinians, and for trigger-happy soldiers shooting Palestinians among other forms of punishments in violation of all international conventions.

Worst of all, these so called “security requirements”, implied from the outset of Oslo that the role of the Palestinian leadership was to safeguard the security of not only the Israelis but that of the Israeli colonial structure.

The security of the Palestinian people and officials alike was never a relevant issue. The lopsided security equation was essentially put in place to guarantee free reign for the Israeli army and the armed settlers to violate Palestinian rights.

Israel has acted with impunity every time it has considered its security violated: Its ruthless aggressions from the shelling of the West Bank and the Gaza Strip during the 2001 Palestinian intifada to the successive wars on Gaza were meant to send a message that all Palestinians will suffer when Palestinians leaders fail to abort the Palestinian resistance.

Instead of challenging the inhumane premise of the self-defined Israeli security, Abbas and the PA have come to accept the US-Israeli notion that their ability to preserve Israeli security is the main raison d’etre.

A sudden announcement of the dissolution of the PA may not be plausible or even advisable. Such a step needs a lot of preparations as it is a huge, albeit necessary, leap. But the main problem is that there is no political will, a disastrous absence a strategic vision.

In large part, the PA is unwilling, or perhaps incapable, to offer such a vision because it is clearly afraid of losing the influence it wants to keep at the expense of the Palestinian cause and people.

The only solution, or beginning of a solution, means the renewal of the Palestinian leadership, free from Oslo, so that it represents all Palestinians from inside and outside Palestine. The PA itself marginalised and undermined the Palestine Liberation Organisation.

Abbas in his speech, as in previous speeches, was keener on sending a message to Israel that the PA is committed to conditions of a non-existent peace process, in reaction to Israel statements warning from a collapse of the PA.

Israeli settlements themselves are part of a continuous blackmailing policy to remind the PA, lest the PA forgot for one second to toe the line. Hence Abbas renewed his and the PA credentials pledging that the resistance will be confined to “peaceful demonstrations”, as if that has ever prevented the Israeli army responding with fire and illegal arrests.

The PA security itself has prevented the demonstrations from reaching the Israeli army checkpoints as part of policing Palestinians, instead of protecting them from the constant Israeli attacks.

Not that Hamas is far from the game. Its understandings, mediated through Egypt, with the Israelis also stipulate prevention of resistance as Israeli distortion of the besieged Gaza, whose people continue to be exposed to Israel’s highly sophisticated arsenal of destruction.

The Palestinian leadership is making Palestinians more vulnerable by its self-serving false illusion that good behaviour and protecting Israeli security is a key to ending the Israeli occupation. When Abbas was asked following his speech about implementing a decision by the PLO Central Council to suspend security coordination with Israel, he responded by describing the decision as “sacred”.

Rhetorically he moved away from the infamous “security with Israel is sacred” quote, but practically sent the opposite message to Israel, not only by stressing commitment to the Israeli stipulations but also acting upon them, thus almost immediately receiving a satisfactory response from Israel.

When a leadership, elected or not, seeks legitimacy from the occupier, it automatically loses legitimacy as the representative of its own people.

Time is running out. Israel is rapidly consolidating its colonial apartheid structure. It is time for Palestinians everywhere to formulate a unified liberation strategy and whoever lags behind is automatically driven out or rendered irrelevant.

Abbas can either continue to live in his bubble, or break out of it, but the bubble will eventually burst and it will expel all those who have lived in it for so long. 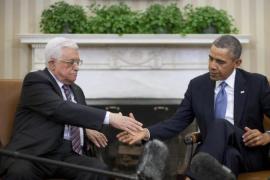 The Palestinian leader is likely to play a key role in any resolution of the Syrian crisis.