On the final page of my friend Juan’s Mexican passport are two words, handwritten in English and in capital letters: “ORDERED REMOVED.”

Following are 43 numbers, letters, parentheses, and other marks, courtesy of the United States Department of Homeland Security (DHS), which deported him from Newark Airport in May 2015 when he was attempting to visit his American wife’s family for two weeks.

The reason Juan was “removed”, like faulty merchandise or a pile of rubbish, was that he had once entered the US without papers to work as a waiter – as so many Mexicans have been forced to do thanks in part to the pernicious economic falloutof the US-imposed North American Free Trade Agreement.

Of course, Juan was luckier than most people on the receiving end of DHS “removal” services – not to mention the countless Latin American migrants that perish along the border, as recently happened to Juan’s own cousin.

Now, according to The Washington Post, the DHS is planning to start the new year off with a bang, i.e. some mass deportations.

The impending “nationwide campaign”, the Post reports, would constitute the “first large-scale effort to deport families who have fled violence in Central America, those familiar with the plan said”. The operation apparently will target only families who have already been ordered “removed” by an immigration judge.

If all of this sounds a bit harsh, consider a December 29 Los Angeles Times editorialin which the paper’s editorial board manages to defend the inherent rightness of the deportation surge – even while acknowledging highly relevant details about the United States’ own contributions to the violence that is fueling mass migration from Central America:

But forget moral culpability. The moral of the story, as usual, is that the US can have its cake and eat it too.

“The US… bears some moral culpability for the criminal gangs that relocated from US cities, including Los Angeles, to thrive in urban neighbourhoods of Honduras, Guatemala and El Salvador. The US also is the main market for the illicit drug trade that helps many of those gangs flourish.”

But forget moral culpability. The moral of the story, as usual, is that the US can have its cake and eat it too.

A sizable portion of the American political class, however, will never be satisfied on the cake front and will continue to insist, despite Barack Obama’s unchallenged record as deporter-in-chief, that the president is somehow soft on immigration.

As CNN recently noted, Donald Trump – whose presidential platform includes the notion that Mexican immigrants are rapists and drug traffickers – gave himself a pat on the back on Twitter for allegedly forcing the DHS family deportation plan into existence via his consistent focus on the issue.

Meanwhile, other right-wing characters have suggested that the whole campaign is simply a rumour meant to generate such a degree of liberal backlash that it then will disappear from the agenda.

But all of this conveniently ignores the solid bipartisan commitment in the US to deportation (as well as to plenty of other policies that make life hell for a whole lot of people). And Trump’s service as the crystallisation of antihumanity merely obscures a similar lack of empathy among those less overtly belligerent and more rhetorically civilised than he.

It thus becomes possible, for example, for Democratic apologists to reason that – compared to the Trumpian fantasy of deporting 11 million people – shipping maybe only hundreds of Central American families back into the violence from which they fled is at least relatively less sinister.

In her new book Deported: Policing Immigrants, Disposable Labor and Global Capitalism, sociologist Tanya Golash-Boza argues that mass deportation is “the latest permutation of the global neoliberal cycle that began in the late 1980s”.

ALSO READ: When the US deports its own citizens

One excerptfrom the book features a Guatemalan man named Eric whose trajectory illustrates the argument. At the age of 11, Eric traveled to Los Angeles on a tourist visa to join his mother, who had been part of the “initial exodus” of Guatemalans from the neoliberal reforms that had begun to asphyxiate the country.

When his mother hurt her back and couldn’t work, he dropped out of school to support his family. Years later as an adult, Eric was deported after being pulled over by the cops for a matter irrelevant to immigration – despite being married to a legal permanent resident of the US – and began work at a call centre run by an American company in Guatemala City.

Golash-Boza sums up the overall process as follows: “[N]eoliberal economic changes abroad create migration flows that send migrants to the United States, which creates a disposable labour force and, when that force is deported, produces a further cheap labour pool for multinational corporations that operate in their home countries.”

As an added benefit, the exploitation of cheap labour abroad helps keep the domestic workforce fully aware of the potentially ephemeral nature of its own employment – and therefore compliant.

This is not to imply, obviously, that all deportees are promptly absorbed into corporate serfdom, but rather to point out one of the many ways in which mass deportation can mean big bucks for those who already have them.

If only we could deport the phenomenon, and then exile it permanently. 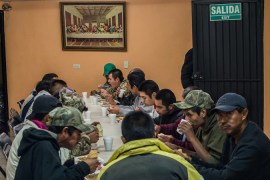 Fault Lines investigates what happens to families torn apart by a broken immigration system in the United States. 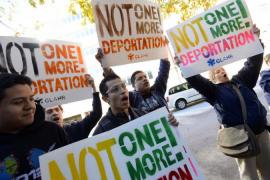 When the US deports its own citizens

Americans who are originally from Mexico have been deported several times despite evidence that they are US citizens.