For Iraqis the year 2016 has been ushered in with their military’s capture of ISIL’s headquarters in Ramadi, capital of the nation’s Anbar province. In terms of what 2016 holds for the future, the military dynamics that led to the fall of Ramadi will serve as long-term harbinger of ISIL’s ability to endure in Iraq.

Upon first glance, the fall of Ramadi appears to mean little for the long term campaign against ISIL. The recent victory brings Iraq back to the status quo as of May 2015, when Iraqi forces took retook Tikrit from ISIL towards the end of April, but then lost Ramadi right after. It took the Iraqi forces several months to return to this status quo. Over all, the victory would appear as a loss, as the Iraqi state won back Ramadi, but utterly devastated the city in the process.

However, in the long term perspective, the fall of Ramadi is a victory in terms of the lessons applied on the strategic-political level and the evolution of Iraqi military tactics, which signals a significant setback for ISIL.

The long battle for Ramadi

In terms of battlefield tactics, the battle for Ramadi took longer than other battles for cities such a Tikrit, which took more than a month to capture.

In Ramadi, as October 2015, the Iraqi Security Forces (ISF), the official military of the Iraqi state, had reached the Albu Farraj area in the north of the city. In the following month, ISIL was weakened after a coalition of Syrian and Iraqi Kurdish militias retook Sinjar in the north, which severed ISIL’s transportation artery from its capital in al-Raqqa, in Syria to Mosul, in Iraq.

ALSO READ: If ISIL is defeated in Ramadi

From October to December, three months transpired before a final assault commenced to penetrate the center of Ramadi, starting on December 22, and ISIL’s HQ fell on December 28, five days later. The slow pace was most likely due to preparing the Iraqi forces, first, for the final push, and second, doing so with minimal civilian casualties.

This was not so much a battle for a city, but a battle by the Iraqi state to project that it still has a national army, and is willing to work with the Sunni tribes.

Whereas the battle for Tikrit primarily featured irregular Shia militias, the battle for Ramadi involved the (ISF), along with irregular tribal Sunni levies. This was not so much a battle for a city, but a battle by the Iraqi state to project that it still has a national army, and is willing to work with the Sunni tribes.

For the first time F-16 fighter jets flown by Iraqi pilots in the Iraqi Air Force had carried out strikes on ISIL positions. Their participation might have been token in comparison to US-piloted airstrikes, but nonetheless the fact that there is an Iraqi Air Force to speak of is significant.

Prior to the ISIL campaign into Iraq in 2014, the Iraqi Air Force consisted of a mere fleet of Cesna propeller planes outfitted with Hellfire missiles to target ground targets.

Furthermore, the composition of the Iraqi military forces, according to the Institute of War, included the Counter-Terrorism Service (CTS), formations from the 8th Iraqi Army Division, local police, and tribal fighters from the Anbar province.

The use of Sunni tribal fighters was most likely for political buy-in, since Ramadi is a predominantly Arab Sunni city, an attempt to downplay sectarian tensions when primarily Shia fighters took the majority Sunni town of Tikrit.

On another level, the role played by national Iraqi forces in the fall of Ramadi also has implications for the creation of an inclusive sense of Iraqiness. A debate has ensued since the summer of 2014 as to whether one can claim that the Iraqi nation still exists.

Iraqi nationalism persists if one were to watch the Iraqi-state sponsored Al-Iraqiyya TV station, which features almost continuous coverage of the war front, along with images of the Iraqi military in action with nationalist songs playing in the background.

Watching this channel requires a suspension of disbelief. It is one of the Iraqi state’s few institutions that can claim the Iraqi nation survives.

With the fall of Ramadi, the Iraqi military, which is featured prominently on this channel, can now also claim that it represents the national aspirations of Iraq. Again any Iraqi will know that the nation is divided among Kurdish Peshmerga and Shia militias. For the legitimacy of Prime Minister Haider al-Abbadi, the Iraqi military’s victory in Ramadi is a testament of his ability to preside at the helm of what remains of the Iraqi state and nation.

What remains to be seen after the fall of Ramadi is the ability of the Iraqi military to develop a doctrine, or a series of lessons learned in the fighting that can be carried forward in the battle for Mosul. A BBC article revealed that the Iraqi military has benefitted from a learning curve during the months-long campaign to remove ISIL from Ramadi.

The Iraqi insurgency that erupted from 2003 primarily used hit-and-run tactics against US and Iraqi forces, tactics typical of a guerilla war meant to wear down the resolve of the enemy. As a result, the US training mission had focused on ensuring Iraq’s new military could deal with this type of combat.

This transformation of training the Iraqi military from counter-insurgency to urban combat explains why it took so long to be deployed on the front lines, creating a security vacuum which the Kurdish Peshmerga and the Iraqi Shia militias filled.

ISIL’s hold over territory since 2014 in both Iraq and Syria has been due to the numerous state and sub-state actors combating ISIL and their failure to come together to take on this group. For example several nations are involved in conducting air strikes against ISIL in both Iraq and Syria, ranging from the US, UK, France, Russia, and Iran, and most recently the Iraqi Air Force in Ramadi.

But up until the fall of Ramadi, it had been sub-state actors, such as Syrian Kurdish militias and Iraqi Shia militias on the ground that deprived ISIL of territory. The Iraqi military has essentially just joined a decentralised military coalition along with Kurdish Peshmerga and Iraqi Shia militias on the ground, combined with foreign nations providing most of the air cover. Whether the ISF can play a central role in this campaign to deprive ISIL of territory remains to be seen in 2016. 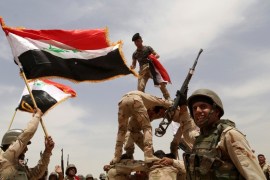 Iraq’s army can make a comeback with a well-chosen chief of staff and a focus on leadership, discipline and training.