“No, please don’t!” a refugee woman shrieked. She dashed to cover her face with a navy blue headscarf as I timidly approached her for a photo. This was in May when the refugee crisis began escalating in Demir Kapija, Macedonia, my town. What had once been a few people had suddenly grown to waves of about 400 people a day, all sleeping at the local train station.

In these first few months, their plight remained invisible to the outside world. People needed to know … But how could I document such unseemliness? Distraught mothers with stone pillows; crying infants with cardboard beds. Blood-stained floors from the barefooted, who had walked over 100km to get here. I was compelled to do something.

I apologised to the woman in the navy headscarf, put away my phone, and sat down to talk to her. With some help from a translator, I learned her name was Haya. She was a Syrian woman in her 30s on her way to Europe. She was one of the first women I met embarking upon this perilous journey.

Haya was with her baby and 7–year–old boy. The translator explained many refugees’ fear of having their photos taken. They were afraid of being seen by the regime they were fleeing.

He added: “Even the name ‘Haya’ means modest, shy … You have to ask them before taking a picture … It’s a family with kids. She is ashamed to be shown on TV like this on the ground – she used to be a distinguished professor back home.”

Back then, it was illegal for the Macedonians to help transport refugees in the country. Haya would have to walk over 170km with her two children to Serbia. She begged us to transport her, but our hands were tied. “You must walk across the country to get to the border,” I uttered in shame.

I felt powerless. Giving all the food, water, shoes and friendship seemed futile when every night ended with me leaving my new friends to their cardboard camps. Every day, I met a new Haya and felt shame. Every day, I felt the urge to apologise and explain it was illegal to take them to my house or drive them to Serbia.

The only thing I had to offer Haya was an old baby carriage. As I pushed it towards her, I heard piercing cries from dozens of women and men begging: “Please, I also have a baby, please!”

I reached Haya. “Thank you, thank you!” she exclaimed with tears in her eyes. I cried together with her – it was a mixture of pain, guilt, gratitude, happiness and most importantly, strength.

But Haya had no time to waste and composed herself within seconds. She raised her head, and with a deep breath, started walking towards Serbia with her children.

Women and children comprise 50 percent of all refugees who fled to Europe by sea in 2015. The right question is not 'Where are the women and children?', but rather, it should be: 'Why aren't we willing to see them?'

At that point, my heart sank with sadness, but I was also overwhelmed by an amazing desire to fight not for these people, but together with them. I realised they were not only victims, but also fighters.

Haya gave me the strength I needed to go back to the train station the next day. And the day after that. And all the coming days …

I met many more Hayas who shared similar destinies and travelled on their own, with kids and no husbands – many of whom were willing to take pictures and speak out. Willing to shout to have their voices heard.

As I am today, after having been asked for the thousandth time: “Where are the women? Where are the children? All I see are young, able-bodied men!”

They are there. They were there in the spring, when Haya and her kids courageously walked 170km across the country. They were there in June, when transport was illegal for them and the refugee women who could afford a bike learned how to cycle in my hometown and, with their babies in bike baskets, rode across Macedonia.

They were there in the summer, when I grabbed an Afghan woman’s hand, screaming my lungs out: “Ahmed! Ahmed!” to try and help her find her 8-year-old son.

They were there on New Year’s Eve, when I made friends with Shayma from Syria, who was undertaking this perilous journey all by herself, hoping to find her sons in Germany.

Women and children comprise 50 percent of all refugees who fled to Europe by sea in 2015. The right question is not “Where are the women and children?”, but rather, it should be: “Why aren’t we willing to see them?”

Gabriela Andreevska is a social activist, involved in grassroots initiatives for social justice and human rights. 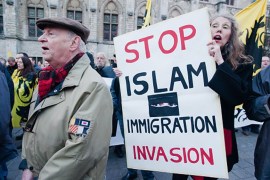 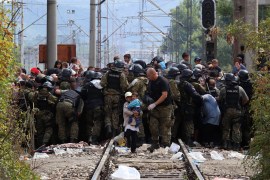 A war is being waged against academic freedom in Britain