It is January 17, 1991, Baghdad time, two days after the UN deadline for Iraq’s withdrawal from Kuwait, which had been occupied in August 1990. Operation Desert Storm had commenced with air strikes against Iraq and its military, launched by US F-117 stealth fighters and cruise missiles, two weapons particularly dreaded by the Iraqi forces as their military correspondence demonstrated.

One of the documents from the first days of the war was a transcript of communications from an Iraqi soldier on a remote outpost on Qaruh Island off the coast of Kuwait. What this unfortunate Iraqi soldier would witness was the big change in the way the US began to transform Iraq from the air as of 1991.

On the eve of the air campaign this remote Iraqi outpost served as a microcosm of what the Iraqi military would endure during the six-week air campaign of the Gulf War.

Codenamed “Sha’ab”, this outpost received a message from its headquarters on the Kuwaiti mainland, codenamed “Azhar”: “In case you see any enemy targets call the base immediately.”

The soldier at the outpost, perhaps with a bit of relief responded, “Nothing in the area now. And you?”

A few hours later the silence was broken as Azhar sent an urgent and secret message to the island: “We inform you the enemy has started to attack. Be extremely cautious, aware and alert. Inform us about all enemy targets.”

The outpost on the island passed the first day of Operation Desert Storm without an incident. However, its fortune ended at 4:45 on the morning of the 17th, as the small island outpost incurred the wrath of the enemy’s attacks. Coalition planes pounded the island in three subsequent waves of attack.

On the following day, the headquarters checked into the status of the island outpost, asking: “What is your situation?”

Sha’ab reported no new attacks, but that for nine hours high-altitude aircraft were circling over the island.

The next morning, Azhar asked Sha’ab for a status report. Sha’ab replied that there was no enemy movement in the area but they had run out of rations. The headquarters offered no rations but these words of comfort:

“To the people of Saddam Hussein, victory for Iraq. We know that you will teach the enemy the lesson that they need. We want you to save ammunition. Don’t use your weapons unless it is a sure target.”

This is the last message the outpost received. We do not know the fate of these soldiers on this island, whether they survived or died in an air attack, but the paperwork did survive the war, which was captured by US forces and was later declassified.

Operation Desert Storm represented the first time the US sought to shape, control, and configure the region from the air, and 25 years later ... the US is still trying to determine the destiny of the Middle East from miles above its soil.

Operation Desert Strom represented the first time the US sought to shape, control, and configure the region from the air, and 25 years later, as the air campaign against ISIL has demonstrated, the US is still trying to determine the destiny of the Middle East from miles above its soil.

Up until 1991, US interventions in the Middle East had been through covert operations, such as using the CIA to overthrow the Iranian premier Mosaddegh in 1953, deploying the Marines to Lebanon twice, in 1958 and then in 1982 during the civil war to prop up pro-Western governments, and in 1987 when the US Navy deployed to the Gulf to reflag Kuwaiti ships during the Iran-Iraq War.

Operation Desert Storm represented the first time the US had sought to change the status quo on the ground in the Middle East, and the Iraqi occupation of Kuwait from the air, culminating in a six-week aerial campaign to compel Iraq to withdraw.

The transcript from the first days of the war revealed the fighting capability of Iraqi military elements on the front lines during Operation Desert Storm, as they endured six weeks of aerial assaults.

Not only were the soldiers hungry on this remote Kuwaiti island but they also had to conserve ammunition when defending themselves from the aerial onslaught. The transcripts exemplified the dilemma faced by the Iraqi military in general and why its overall defence collapsed as Operation Desert Storm proceeded.

The outpost Sha’ab, meaning the “people” or “masses”, stood to represent the fate of the Iraqi masses conscripted into a doomed defence of Kuwait and Iraq. The Iraqi military was commanded to defend Iraq and its 19th province, Kuwait, at all costs.

In spite of the desperate need for provisions, in many instances the only things that reached the frontline units were mere words of support from the Iraqi leadership. The Iraqi military had no chance of resisting the six-week aerial campaign.

Yet six weeks later Iraqi forces still had not withdrawn from Kuwait. It took US and Coalition ground forces to expel the Iraqi military, which happened relatively quickly – within the span of two days, more or less.

The decisive victory for the US after Operation Desert Storm had been described as helping the US to recover from its Vietnam syndrome.

Yet from a perspective 25 years later, Operation Desert Strom was a Pyrrhic victory. Saddam Hussein survived the 1991 Gulf War, and the air war continued for more than a decade afterwards, dubbed Operation Southern Watch.

Air strikes constituted a means of disciplining Saddam Hussein from the air, where Coalition aircraft flew 153,000 sorties over Iraq to enforce its “no-fly” zone, focusing on targets such as Iraqi anti-aircraft radars. This “Operation” continued until Operation Iraqi Freedom, when George W Bush sought to finish the unfinished legacy left by his father George H W Bush.

However, the 2003 invasion would lead to an insurgency erupting the same year, which would result in the rise of the Islamic State of Iraq and the Levant (ISIL), which is now being fought with another US air war.

Rather than seeing Operation Desert Storm as the beginning of a conflict that began in January 1991 and ended in March 1991, we can view it as the beginning of the US’ use of air power to try to shape Iraq, which has continued for 25 years, with no end in sight. 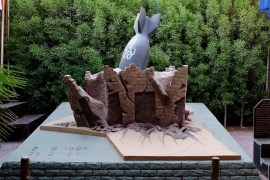 The day Kuwait would rather forget

As regional turmoil surrounds them, Kuwaitis are quietly marking the 25th anniversary of Iraq’s invasion.