Istanbul’s historic peninsula, whose skyline is dotted with Ottoman and Byzantine architecture and which encompasses both the Blue Mosque and Hagia Sophia, was shaken on January 12 by a heinous terrorist attack.

A Saudi-born Syrian suicide bomber, widely believed to be inspired by ISIL, detonated a bomb in the historic district, killing 10 people and injuring 15 others. At least eight of those killed were German citizens, according to official statements.

As this blast illustrates, Turkey is experiencing the pain and heat of playing neighbour to a civil war in Syria and arguably a failed state in Iraq. There is no quick fix to the challenges it faces.

The fact that the country is suffering its fourth terrorist attack in less than a year clearly confirms this point. In fact, never in its history has Turkey faced such a sustained threat from an international terrorist network.

In order to paint an accurate picture of this recent attack, its meaning and possible implications, we need to situate it within the context of continuity.

In less than a year, Turkey has seen four terrorist attacks of a similar nature, all widely believed to have been carried out by ISIL.

ALSO READ: Turkey is not in bed with ISIL

The first took place on June 5 at a rally of the pro-Kurdish People’s Democratic Party (HDP) in Diyarbakir right before the June 7, 2015 elections. This claimed two lives and injured more than 100 people.

The second targeted leftist-Kurdish young activists gathered at a cultural centre in the predominately Kurdish south eastern town of Suruc and preparing to deliver aid to the previously besieged Syrian city of Kobane on July 20, 2015. This blast claimed 32 lives and injured over 100 people.

The third, the bloodiest terrorist attack in the history of the modern Turkish Republic, occurred during a rally organised by Kurdish and left wing political parties, trade unions, and civil society organisations in the capital Ankara on October 10. This incident killed 102 and wounded hundreds of people.

This historical background shows that these terrorist attacks and their perpetrators had clear political goals in mind while executing these acts. By targeting Turkey’s ethnic (Kurdish-Turkish) and sectarian diversity, these attacks were aimed at Turkey’s political fault lines.

This attack didn't take place in an inland city where the victims would have been Turks. Instead, it took place in the midst of some of Turkey's major tourist attractions in Istanbul.

In contrast, the recent attack illustrates that they are now targeting Turkey’s economic lifelines. This attack didn’t take place in an inland city where the victims would have been Turks. Instead, it took place in the midst of some of Turkey’s major tourist attractions in Istanbul. All the victims were tourists, with Germans disproportionately represented.

As Turkey welcomes around 35-40 million tourists per annum, tourism is one of Turkey’s main revenue generating industries, bringing in approximately $34 billion. Given its selection of the site and target group, this attack appears intended at disrupting Turkey’s tourism industry by depicting the country as unsafe.

As the Paris attacks reminded us, terrorism aims to disrupt normalcy and everyday habits. Just as avoiding Paris for leisure and tourism would be tantamount to handing a symbolic victory to terrorism, so would avoiding Istanbul. Normalcy should prevail over terrorism’s instrumentalised fear and mayhem.

In addition, whether intentional or unintentional, the identity of the suicide bomber as a Saudi-born Syrian citizen seems intended to stir up tensions towards Syrian refugees in Turkey.

Turkish authorities bear full responsibility for ensuring that this attack is not used as a pretext to demonise refugees and the victims of war. Syrian refugees living in Turkey are victims of the same terror as those caught in Tuesday’s bomb blast. Stranded between ISIL’s state of terror and Assad’s regime, these people had almost no option but to flee their country and seek a better future elsewhere.

In this regard, this attack should have no impact on Turkey’s initiative to improve living conditions for refugees in the country by granting them work permits, which was announced only a day before this incident.

Deputy Prime Minister Numan Kurtulmus said the “draft” regulation had been adopted by the council of ministers and would be published in the coming days.

According to this new draft regulation, employers will be able to have Syrians comprise up to 10 percent of their staff. This is the correct policy and there should be no backsliding from it after this terrorist attack.

Hence, helping refugees to have a better life isn’t just a moral imperative. It is – and should be – part and parcel of a new security architecture that strives to uproot terrorism and stifle what would otherwise be amenable grounds for future radicalism and terrorism. In other words, the choice for the refugees’ host countries is clear: home-grown terrorism or better integration. 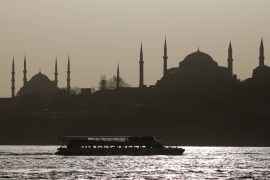 If Muslims and Christians worship in this single space, it would send out a powerful message of coexistence.