The photograph of Aylan Kurdi, the Syrian child from Kobane whose body washed up on a Turkish beach, has sparked a “light bulb moment” in the heads and hearts of European public and policymakers alike – forcing both significant debate and new policy towards the refugee crisis.

A single image appears to have the potential to change the course of history. The photograph of Aylan Kurdi’s death has crystallised a crisis and encapsulated a sense of urgency from both European public and policymakers alike.

People are suddenly alert to the crisis as if a tsunami wave of refugees emanating from the Syrian earthquake has suddenly crashing into the shores of Europe.

The impact is being felt worldwide with newspapers, social media and television news filled with stories of food drives, fundraisers for refugees and petitions urging politicians to accept higher numbers.

Bob Geldof, who played a key role in the “Live Aid” appeal, has said “I have a spare bedroom, I will happily take a Syrian refugee.”

People are comparing the impact of Kurdi’s photograph with that of the Moon landing and a Guardian editorial wrote the photo “felt like the moment a crisis defined by abstract debates over ideology, statistics and terminology shifted to one about people”.

Suddenly Kurdi’s death appears to have woken Europe up to what this crisis means – that a fire of the intensity of Syria’s conflict was never going to be contained to the region alone.

New data from the UNHCR showed that 366,402 migrants have crossed the Mediterranean this year, with 2,800 dying or going missing en route.

The human face of the crisis has tragically revealed itself. The invisible has become painfully visible. As Susan Sontag wrote in her book, On Photography, photographs furnish evidence and “something we hear about, but doubt, seems proven when we’re shown a photograph of it”.

Across Europe there is a widespread distrust of politicians and the tragic scale of the statistics coming out of Syria – where half the population have been forced from their homes – has proved almost impossible to digest. Yet we trust our own eyes.

The photographer who captured the moment, Nilufer Demir, explained that she was moved to take the heartbreaking image of the 3-year-old’s lifeless body so she could “express his scream”. There is the innocence of a child versus the seeming guilt of the adults engaged in Syria’s bloody civil war.

This is not the first time that a single photography has captured the zeitgeist of an issue and made the complicated both understandable and human.

Samantha Power, now US ambassador to the UN, wrote in her book A Problem from Hell how former US President Bill Clinton was so moved by a photograph of a Kosovan rape victim who hung herself that he immediately escalated his country’s response to the conflict.

The images – both still and video – of dead US soldiers being dragged through the streets of Mogadishu in 1993 saw an almost immediate response of withdrawal from the region.

Other conflicts may not have been directly changed but have been defined by photography, whether the image of Kim Phuc running from a napalm attack in Vietnam or the human pyramids of Iraqi prisoners being held in US detention at Abu Ghraib.

Earlier this year campaigners tried to use the power of photographs to put pressure on decision-makers at the UN by having an exhibition of smuggled pictures of Syrian victims of torture in the corridors of the New York headquarters. This may have appalled some of the diplomats but has had a fraction of the impact that Kurdi’s death has had globally.

War photography has bridged conflict to civilisation – who are often appalled by what they see. Suddenly possibilities not just for action on accommodating refugees but for new policy towards Syria are being discussed.

Domestic political forces that might have pressed for action but absent in the past have arisen with reinforcements from across the political spectrum. Aylan Kurdi was only 3 years old when he died. He’d been born in conflict and passed away in a desperate flight away from it.

His death has shaken the system and allowed for a fresh debate about what can be done about the root cause of Syria’s terrible conflict. It should not be in vain. 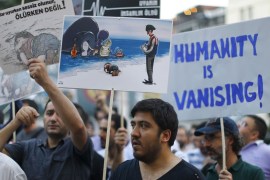 Faith in humanity should be restored

It is scandalous and unacceptable that it took so long and so many deaths for a wake-up call in Europe.