Pope Francis’ first visit to the United States is a momentous occasion. The leader of over 1.2 billion Roman Catholics is largely expected to focus on issues like inequality, climate change and religion. Yet the pope, who is only the fourth pope to visit the US while in office, arrives at a time of unique crisis in the Middle East. Wars plague both Syria and Yemen. I hope that he uses his four days to address another issue of significance: the urgency of solving the conflict in Palestine and Israel.

Many of the pope’s acts of kindness have been closely followed by Muslims across the world. Last year, we witnessed the symbolic power of the pontiff washing the feet of a 75-year-old disabled Muslim man from Libya in the pre-Easter ritual of Maundy Thursday. Muslims have witnessed the pope articulate “an expression of esteem and friendship for all Muslims”.

There is no state entity that can single-handedly ameliorate the reality in Palestine.

The pope has not limited himself to theological speculation but has pursued Vatican reform and outreach work. He was instrumental in removing the Cold War embargo against Cuba. The pope has commented on inequality and the imbalances of capitalism. Many would like to see him extend the same spirit of reconciliation to the situation in Israel and Palestine, one of the most entrenched political conflicts of the last century.

There is no state entity that can single-handedly ameliorate the reality in Palestine. As the primary enabler of the conflict – in 2012, Israel received $3.1bn in aid – the US is a hypocritical peace-broker. Time and again, the US has also vetoed United Nations resolutions condemning Israeli assaults against Palestinians. Nor can we look to the UN to bring about a radical transformation. The UN’s structure reflects more the victors of World War II than it does a global consensus.

The pope has already demonstrated his willingness to take on some of the more entrenched political and religious conflicts of our time. He has stood against exclusivist claims to religion, saying: “I believe in God, not in a Catholic God; there is no Catholic God, there is God.” He has taken a stand against patriarchy, stating: “Women in the church are more important than bishops and priests.” He has broken with Vatican hardliners and acknowledged the dignity of gays and lesbians: “If a person is gay and seeks God and has good will, who am I to judge him?” He has spoken out about the vicious legacy of European colonialism, citing that “many grave sins were committed against the native peoples of America in the name of God”.

His worldview is consistent with the contemporary world. The pope has spoken that he sees the church as “a field hospital after battle”. If he is looking for a wounded place in the world urgently in need of healing, that place is Palestine. The birthplace of Jesus is under occupation. The world’s first indigenous Christian community is in danger of being eradicated within our own lifetime. The pope has already spoken about the suffering of the Christian minority population in the Middle East: “Today we are dismayed to see how in the Middle East and elsewhere in the world many of our brothers and sisters are persecuted, tortured and killed for their faith in Jesus.” He should extend that call to the lives of all Palestinians, both Muslims and Christians, by pleading with the world to remove the occupation, allowing Palestinians to live in dignity, freedom, and peace with their Jewish neighbours.

The pope has previously delivered sermons on both freedom and nationhood: “No actual or established power has the right to deprive peoples of the full exercise of their sovereignty.” He can make a powerful case for peace and justice by specifying this concern for all Palestinians. He can make a call that Palestinians, alongside Jews, deserve to have full exercise of sovereignty without occupation, siege, military checkpoints, walls and settlements. He could revive a stagnant peace process which has been eclipsed by US interventions and more recent conflicts in the Middle East.

The Palestinians have for too long been dispossessed and disenfranchised. Half of all Palestinians remain exiled from their ancestral homes since 1948. Those who have remained have found themselves occupied and humiliated since 1967. A pope who has found influence in ecumenical gestures now has the opportunity to make a plea for bringing healing to one of the most protracted disputes of our time.

Omid Safi is the director of the Duke Islamic Studies Center. 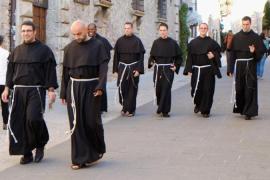 In the name of Francis: A chance and a challenge

What a medieval saint could teach a modern pope. 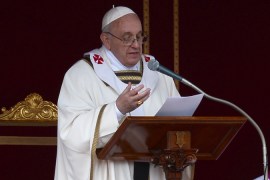 The quaint mythology of Pope Francis

Will Pope Francis’ past overrule his present and his future, limiting the scope of his contribution to the region?

Fake Hafez: How a supreme Persian poet of love was erased