On September 11, Election Day arrived in Singapore with haze and a pollutant standard index (PSI) of 211, one category short of hazardous. It was midnight at the close of “Cooling-Off Day”, when all election campaigning is abruptly silenced, and the streets were busy on the eve of a public holiday.

Morning ushered in what many expected to be the most tightly contested election in Singapore’s history. Low Thia Khiang, leader of the Workers’ Party, had been receiving a “rock star reception” everywhere he went. Still, predictions were as hazy as the air since polling during the election campaign is prohibited.

Singapore is at a turning point. This year marks the 50th anniversary of its traumatic expulsion from Malaysia and consequent birth as a city-state and nation.

Lee Kuan Yew, who led the country from independence to prosperity, passed away earlier this year. His son, Lee Hsien Loong, leads the ruling People’s Action Party (PAP), which has held power for 56 consecutive years.

In that time, Singapore’s growth had been unprecedented. According to the International Monetary Fund, Singapore’s gross domestic product per capita is third in the world, almost double that of Hong Kong, the United States, and Germany.

With 82 percent of its citizens housed in publicly governed and developed apartments – over one million of these Housing and Development Board (HDB) flats were constructed since 1960 – Singapore is an anomaly.

The city-state is also a place of growing disquiet. In 1980, citizens made up 91 percent of the population. By 2012, with low birthrates and increased immigration, the number had fallen dramatically to 62 percent.

RELATED: What African leaders failed to learn from Singapore

The government’s 2013 Population White Paper, which envisioned a future in which citizens would comprise just 55 percent, led to widespread protests. Anxiety about the future meant that the “old habits of obedience” – as Lee Kuan Yew once described the public mind-sets – are slowly breaking down.

In language ranging from thoughtful to profane, many are expressing anger that their country is being taken from them: A loss precipitated by a global economic order in which Anglo-American and Chinese investments bring not only expertise, but a management structure that denies high-level jobs to Singaporeans. In using “foreign workers” and “foreign talent” to grow the economy, have they built their future on a bed of sand?

For the newly formed political party, Singapore First, which campaigned under the slogan: “Restore Our Nation”, anxiety about the future is the elixir of life. Reform Party candidate Gilbert Goh elicited a few cheers at an election rally when he called the prime minister a “traitor”, adding that the prime minister “sold us out. This is my country. Is it fair that I, a Singaporean, am unable to get a job because a foreigner told me so?”

Meanwhile, workers from Bangladesh, India, Myanmar, and Nepal are constructing Singapore’s increasingly grandiose skyline, cleaning the streets, tending the lawns, and making homes and offices immaculate. Their labour allows Singaporeans to not only live in style, but to function; yet, they bear the brunt of local resentment and condescension.

Like Europe, Singapore needs immigrant labour for growth – and like Europe, some would prefer the labour without the immigrants. Young Singapore, however, was founded on an entirely different set of principles.

Profound forces are at work in Singapore: reason, compassion, contempt, class and racial anxiety, and economic fear. People want acknowledgement that, although a beloved country has been built, all is not well.

The loss of Lee Kuan Yew has cut deeply: Is there anyone in Singapore with the vision and authority to shape the future? Can they move forward with confidence, or is it fear that should guide them?

The air quality was still hazy when election results came back in the early hours of September 12: The ruling PAP has won a staggering 69.9 percent of the popular vote. The Workers’ Party held six lonely opposition seats in a parliament of 89.

At 3am, a victorious Lee Hsein Loong, moving effortlessly between English, Malay, and Mandarin, said that these results will be noted by “investors, by other powers and by our neighbours”, and that the government will “contain populist pressures while being responsive to popular needs”.

An online video of a man attending an election rally a week earlier has come to mark the election for me. In 2012, Lee Nam Cheong’s son was killed by an allegedly speeding driver. Lee, a stallholder, wanted the government’s commitment to improve safety conditions on a road that has recently seen three separate incidents of children being struck by cars. “I lost my son. Someone help me,” he cried, increasingly desperate. “Can you help me or not? I am a Singaporean. I need your help.”

The video has been viewed over 95,000 times and drifts through social media like a lost fragment. It was everyday life, an individual far removed from power, crying out for an institutional face to right a wrong, to make sense of the present – and it was answered with silence.

Madeleine Thien is a novelist currently living in Singapore. Her latest novel, Dogs at the Perimeter, about the aftermath of the Cambodian genocide, was shortlisted for the 2014 International Literature Prize. 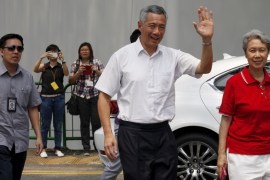 Results, which shows PAP won almost all of the seats, strengthen the mandate of the party amid an economic slowdown. 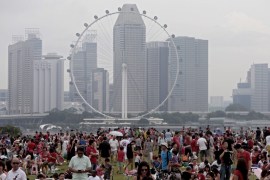 Can the success story of Singapore be replicated?

From an impoverished nation five decades ago, Singapore has gone on to become one of wealthiest nations in the world.