Cultural studies thoroughly explain the modus operandi by which cultural forces utilise power, as in mass media, to structure and systematise diverse systems of representation, production, consumption, and distribution.

Those insights clarify how symbolic and institutional forms of culture and power are mutually entangled in fashioning dissimilar identities, modes of political agency, and even the social world.

To quote Henry Giroux: “Within this approach, material relations of power and the production of social meaning do not cancel each other out, but constitute the precondition for all meaningful practises“.

And it is such a confluence of contesting cultural repositories, human agency, and knowledge production that was the genius behind the Huffington Post and its recent collaborative extension into Huff-Post Arabic.

Our social world is rife with all sorts of intellectual tussles, and the realisation to open spaces for that social contestation is what skyrocketed the Huffington Post into its formidable position.

This, similarly, was the ambition behind launching Huff-Post Arabic – to provide a virtual platform upon which Arab societies’ unique social contestation between secular, religious, or other human agents, may take place.

Far from impeding growth, internalising and constructively utilising diversity furthers the maturation of a vibrant and just civil society. John Rawls defines ethos as “maximum liberty, minimal inequality”, which implies espousing plurality and enduring what we may find distasteful.

But, since social cohesiveness occurs when people listen to one another, the initial distastefulness is understood as a necessary sacrifice.

Even though there has been opposition to Huff-Post Arabic as of late, there is a disconcerting purpose implicit in the claims: the unhealthy stifling of diversity – the very thing that makes the Huffington Post what it is.

In the last 10 years, the Huffington Post has had an exhilarating rise to its present-day juggernaut status, with over one million comments on its monthly blog.

Not only has it launched from numerous US cities, but embraces African American, Latino and, now, Arab voices.

This, actually, is not surprising to those who have closely followed its exponential growth. For it is in its counter-culture imperative – or, at least, its ability to give space to challenging voices – that was instrumental in its mesmerising appeal.

It positioned itself in a space to confront various manifestations of privilege and hegemony, and it does so with inclusivity.

After all, its founder, Arianna Huffington has said, “giving and service mark the path to a world in which we are no longer strangers and alone, but members of a vast yet tightly knit family“.

Then why silence voices on Huff-Post Arabic? Will that resolve the long-standing polarisation that is gripping Arab society? Will it rescue the pluralistic legacy that has been hijacked by authoritarianism – whether religious or secular?

Here, again, Giroux notes the importance of recognising “performative workings of culture” that are instrumental for “expanding the possibilities of democratic politics, the dynamics of resistance, and the capacities for social agency“.

Huff-Post Arabic aims to work in that capacity, however, there is a need for an honest appraisal of the Arab societies’ own unique values, challenges and priorities, in light of its present circumstances.

Firstly, the Arab world, home to a rich civilisation and cultural repository, needs to be understood from its own values and framework.

These are constantly being negotiated, but, unfortunately, not by civil society. Instead, there is a top-down, heavy authoritarian approach that is being used to pummel the masses, which is unworkable.

In our global village, no society can afford to disconnect from the rest of the world, and Huff-Post Arabic provides a unique opportunity to understand each other and live in one world.

Arab society should be assisted in allowing an open, free discussion between disparate social forces in order for natural consensus to emerge. This will allow social actors to navigate a path towards social equilibrium and a middling between polarities.

Secondly, changing a society’s values does not come by imposing it haphazardly on an unsuspecting people. Rather, it occurs through unguarded, frank dialogue from within and a similar conversation with others.

Hence, the importance of promoting these two dialogue frequencies for Arab society and the world. In our global village, no society can afford to disconnect from the rest of the world, and Huff-Post Arabic provides a unique opportunity to understand each other and live in one world. It is togetherness, not separation, which makes our world less dangerous.

Thirdly, every society, given their context and contestations, has priorities. In the Arab world, the foremost priority is freedom from tyranny. Thereafter, disparate social contestations in civil society will navigate the thorny path to a consensus regarding democracy, human rights and economic development.

Tyrants, largely, rule the day in the Arab world, as is evident in Egypt’s recently mandated anti-terror laws and jailing of Al Jazeera journalists. Actually, what the detractors and tyrants hate the most are for any representative voice to take root.

That development took Europe and North America centuries to actualise, and any precursory reading of European social evolution shows that – especially issues concerning women. Clearly, there needs to be realistic expectations from the Arab world in regards to its progress.

Concluding, Huff-Post Arabic’s ambition is to create what Leo Tolstoy described as “freethinkers”, who use “their minds without prejudice and without fearing to understand things that clash with their own customs, privileges, or beliefs. This state of mind is not common, but it is essential for right thinking“.

And those “freethinkers” create the intellectual space where social contestation takes place.

This is only the beginning, and there will be challenges by all kinds of detractors – those who support the status quo and those who wish to uproot it; those who may coerce prayer or coerce its eradication.

The solution is away from both extremes, and detractors should not be setting the agenda.

Still, they should be heard. Either in the content of their constructive criticisms or if only to laugh it off and painstakingly move forward on the difficult path towards balancing polarities and achieving social equilibrium. 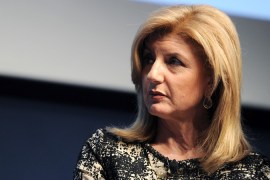 Arianna Huffington: Beyond left and right

The co-founder of The Huffington Post on why the old concept of the political left and right marginalises issues. 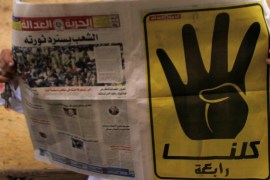 We analyse the consequences of Egypt’s new anti-terrorism bill; plus, the risks of reporting on Italy’s Mafia.