Stephen Harper’s government has been building a legislative fence around Canada since 2006, when his Conservatives first came to power.

Now, because of Aylan Kurdi’s tiny body lying face down on a Greek beach, the prime minister is caught in the razor wire of his own making – while his hopes for a majority win when Canadians go to the polls on October 19, have been shredded.

That’s because ever since a Canadian connection was made with the Kurdis – Aylan’s British Columbia-based aunt applied and failed to sponsor another of her brothers and his family for settlement here – Harper has suffered unrelenting barbs from the media, the rival New Democratic Party (NDP), and Liberal Party leaders.

Voters have realised that Harper’s Canada is not the same Canada that welcomed tens of thousands, if not hundreds of thousands, of people fleeing Hungary in 1956, Czechoslovakia in 1968, Uganda in 1972, the Pinochet takeover of Chile in 1973, Indochina in the 1970s, the Yugoslav civil war in the 1990s…

Now Canada is governed by the likes of former Immigration Minister Jason Kenney who recently told the CBC: “We do not bear responsibility for decisions that people make to hire unscrupulous human traffickers and put them in danger’s way.”

Experts have identified 111 new immigration policies since 2002 compared to 19 introduced during the entire period from Canada’s founding in 1867 until the events on September 11, 2001.

The most onerous and exclusionary changes have come in the Harper decade. This is demonstrated by the drastically reduced number of people granted refugee status: down from over 35,000 in 2005, to some 23,000 in 2014.

Also read:  Welcome to Canada but don’t get too comfortable

According to the United Nations, Canada dropped from fifth place five years ago on the list of the top 15 refugee-receiving nations, to last place now. Meanwhile, from 2006 to 2013, more than 100,000 people have been deported. About 11,000 men, women and children a year have been locked up in prisons to await uncertain fates in countries such as Egypt, Iran, and Syria.

No wonder a 2013 Harvard University study condemned Canada for “systematically closing its borders to asylum seekers and circumventing its refugee protection obligations under domestic and international law”.

If it weren’t for Canada’s constitution and courts, both constant thorns in Harper’s side, the situation would be even worse.

In 2012, for example, his government decided on so-called “safe” countries that it doesn’t count as dangerous. Refugee applicants could be sent back to them just because the Harper government deemed them safe. Journalists on the run from certain assassination in Mexico? No worries. Back they go.

But in July, a federal court ruled that list discriminates against asylum seekers originating from those ” designated countries of origin [DCO] ” by denying them access to appeals. The judge also said that the list “perpetuates a stereotype that refugee claimants from DCO countries are somehow queue-jumpers or ‘bogus’ claimants who only come here to take advantage of Canada’s refugee system and its generosity”.

Which is exactly what the Harper government explicitly intended to do with that and other anti-refugee laws it passed in 2012. That’s when it denied refugees the free healthcare all Canadians enjoy. Ailing children, pregnant women, the diabetic, none would get any medical attention.

“Canadians have been clear that they do not want illegal immigrants and bogus refugee claimants receiving gold-plated healthcare benefits that are better than those Canadian taxpayers receive,” Kenney’s office proclaimed.

Doctors rebelled and successfully sued . The courts deemed the law “cruel and unusual” as well as unconstitutional. But the Harper government continues to fight, at a cost of more than a million dollars.

Now, because of the outcry over Aylan Kurdi, Canadians know that, although millions of Syrians have fled war-torn Syria since 2011, barely 2,400 have been resettled in Canada. That’s a number so shameful that current Immigration Minister Chris Alexander balked at providing it to the media.  In fact, in June 2014, when pressed to do so by a CBC radio host, he hung up the phone mid-interview.

Last week, in a laughable effort at damage control, Kenney, now defence minister, postponed a scheduled campaign announcement “on Conservative efforts to protect the integrity of Canada’s immigration system and the security of Canada”.

Which is just Conservative code for “we will pass more laws to make Muslims unwelcome”.

The tide of humanity

Indeed, last month, Harper promised to pass a law making travel “to places that are ground zero for terrorist activity a criminal offence”. Which means that those who wish to visit family in home countries such as Iran or Iraq are out of luck.

And so, at an election campaign event on September 3, only Harper’s hand-picked supporters fell for his fraction-of-a-second flash of humanity when he spoke briefly of little Aylan before launching into yet another war cry against what he termed “the root cause”, ISIL.

As if increased bombing would stem the tide of humanity pouring out of Syria.

But the flood of heart-wrenching images and angry editorials has not stopped. Harper ignores the fact that virtually all of us, in this generation or in the past, with the exception of First Nations people, were “boat people” who arrived here seeking a better life.

It could have been us on that beach.

As one former Tory immigration minister publicly advised: “Act from your guts and your heart. Otherwise, the Conservative government should be swept out of office by a tsunami wave of anger.”

But, judging from the latest polls, Harper’s political future has already hit the rocks. 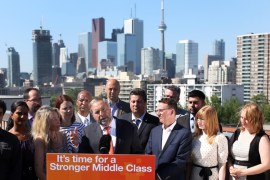 Tom Mulcair seems bulletproof – any attempts to portray him as pandering to Quebec separatists have gained no traction.