The recent decision by Al Jazeera English to use the word “refugees” instead of “migrants” to describe the thousands of people who risk their lives to make dangerous journeys to reach secure territories is an historical act – maybe even a delayed one.

The use of terminology is of critical importance in shaping our perceptions, attitudes and behaviours. Calling those who flee from persecution, inhumane treatment, torture, violence and war as “migrants” may have irreparable consequences on government policies and the lives of thousands of actual refugees.

In order to understand the possible political and humanitarian consequences of using inaccurate terminology, we need to bear in mind the harrowing experience of the thousands of individuals who flee danger zones and how these experiences form the basis of internationally accepted norms.

The definition of “refugee” has been clearly determined by both the international refugee law and international human rights laws. Refugees are persons forced to leave their homes and countries because their lives and freedoms are in danger.

The 1951 Geneva Convention Relating to the Status of Refugees describes a refugee as any person “owing to well-founded fear of being persecuted for reasons of race, religion, nationality, membership of a particular social group or political opinion, is outside the country of his nationality and is unable or, owing to such fear, is unwilling to avail himself of the protection of that country”.

In the course of the development of the international refugee law, this definition has been broadened to cover persons who are forced to leave their countries because of widespread violence, war, civil war and foreign occupation that put their lives at risk in their countries.

International refugee law also creates both status and rights-based instruments and is underpinned by a number of fundamental principles, most notably non-discrimination, non-penalisation and non-refoulement.

Non-refoulement is a key facet of international refugee law, which concerns the protection of refugees from being returned or expelled to places where their lives or freedoms could be threatened.

The reason for leaving one’s country is considered as the main factor in distinguishing refugees from migrants. Refugees are persons who are forced to leave their countries for the reasons mentioned above.

From the perspective of the states, it is an ethical and legal obligation to keep their borders open to the refugees who are fleeing from serious violations of human rights or war.

International migration, on the other hand, is an act by individuals who decide to voluntarily leave their countries for various reasons.

Since the mid-1970s, the channels for regular migration to more developed countries have been restricted, mainly due to the global economic crises and various political reasons.

This has forced many people, especially in lesser developed countries, who decide to migrate to other countries in search of a better life to look for alternative means of entry.

In many cases, to escape from extreme poverty and lack of hope for a dignified life in the future, migrants do not have many alternatives. Many have to travel irregularly and without proper documents.

Nevertheless, developed countries’ response to this flow of migrants was to impose strict entry restrictions and more security measures to stop irregular entries into their territories.

These restrictions have been detrimental for refugees who have the right to seek asylum in other countries under Article 14 of the Universal Declaration of Human Rights.

These countries have the responsibility to respect the human rights of both refugees and migrants.

Whether they enter with proper documents or not, migrants are – above all – human beings. However, from the perspective of the international refugee law, states have obligations towards people fleeing from persecution or violence.

It is the duty of the states to protect refugees by not sending them back to the countries where their lives are at risk.

They also have the responsibility to provide durable solutions for refugees.

Refugees, who often leave everything behind when fleeing their homes, need legal status and access to the basic rights and social and economic services to build new, dignified lives in their new country.

Unfortunately, some countries increasingly try to avoid fulfilling their responsibilities towards refugees by denying their very status as refugees.

The use of terminology is usually an instrument in this practise.

By creating new categories for refugees like “migrants”, “illegal migrants”, “persons under temporary protection”, these countries hope to shirk their responsibilities towards refugees.

This is why the decision by Al Jazeera English is a historical step in conformity with the international refugee norms to create the right perceptions in host countries.

RELATED: A call for EU cooperation on the migration crisis

Some media, especially in EU countries, are extremely hostile towards refugees and irregular migrants.

They deliberately try to criminalise both groups. They refer to them with one word: illegal migrants.

Such a discriminatory media response to the largest humanitarian crisis of our era constructs negative public attitudes towards the thousands of people desperately in need of international protection.

Such negative attitudes lead to more restrictive policies by political parties and governments. The consequence is the double victimisation of refugees.

Metin Corabatir is the president of Ankara-based Research Centre on Asylum and Migration and for 18 years, he has served as the spokesperson of the United Nations High Commissioner for Refugees (UNHCR) in Turkey. 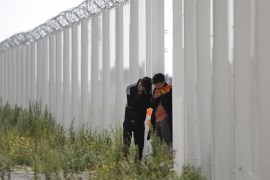 A call for EU cooperation on the migration crisis

The EU must show it is a union of values – capable of managing migration policy with fairness and compassion.