Apart from the constant aerial bombardments and denials of our rights by Israel, we Palestinians have been victims of another major global force: the American news media.

Misrepresentations of our history, our struggle, and our narrative have been the norm.

From the media’s refusal to use the term “occupation” to its insistence on creating a faux-parity between oppressor and oppressed, Palestinians have become accustomed to seeing their images grossly twisted on every American news channel.

In fact, if one were to only watch CNN to glean the latest developments, one might think that there is a country named Israel that is fighting a country named Palestine.

But for the past 15 years or so, amid a sea of bias and distortion, one voice in the American media has given some modicum of balance to discussion on the Palestinian question.

One individual has humanised Palestinian lives and levelled the debate.

One personality has dared to criticise Israeli policies that have for so long denied the most basic of rights to Palestinians, through occupation and ethnic supremacy.

Whether Jon Stewart knows it or not, and whether he likes it or not, he has become a bit of a hero to us Palestinians over the years.

We incessantly share and pass along clips of his bits.

He is not afraid to take on Israel or its leaders, as he did right after this March’s elections, in a report that showed the best (or worst) of American media.

We recite his lines to each other. One of our particular favourites came in the midst of last summer’s illegal and murderous Israeli war on Gaza’s civilians:

Now, some might think that it’s a little weird that my people would hold someone from Stewart’s people in such high esteem.

But those people clearly don’t know what they are talking about. If you know anything about history, you would know that this isn’t the first time a Jewish person has been wildly popular in Palestine. (Remember Jesus?)

Now, let me also say that Palestinian praise of Stewart does not come without any criticism.

Progressive liberals in the US see him as their beacon, someone who speaks the truth in a media world where deception and misdirection are the norm.

Of course, the Palestinian struggle is not simply about being seen as human beings who are worthy of the most basic of rights. It is about justice and equality.

It is about the theft of our land, and the basic injustices of the Nakba of 1948, which we recently commemorated on May 15.

Incidentally, we Palestinians don’t have holidays like other peoples. We just have commemorations.

I know, there’s a pretty strong “they stole our land” theme happening.

In a country where we are seen as generally unworthy of protection, we appreciate Jon Stewart telling the world that we Palestinians are, in fact, human beings who do not deserve to be indiscriminately killed.

But some of us do worry that his saying as much will lead other liberal, progressive Americans of conscience to think that saying that, and only that, is enough, without addressing the deep roots of Israel’s colonialism and ethnic supremacy.

Nevertheless, the truth is that Jon Stewart has basically stood alone when it comes to Palestine.

No one in the US’ mainstream media (and yes, in the US, Comedy Central’s The Daily Show is mainstream) has dared to come close to Stewart’s objectivity, honesty, and even-handedness in covering Israel.

The end of his nightly appearances on our television screens will leave a major void.

Now, I do feel obliged to deliver Mr Stewart one last message. In fact, it’s an apology (sort of).

Much like our Jewish cousins, we Arabs have a bad habit of saying, “Well, that’s nice, but he could have done more.”

Some would prefer that he show up at Palestinian rallies and start waving the “Zionism is racism” banner. Sometimes, I’m one of those people.

But who knows, maybe after his retirement, we will find him at a demonstration, in a sea of keffiyehs, chanting with the rest of us.

Amer Zahr is a Palestinian-American stand-up comedian and professor of law. He writes and speaks widely on political and social affairs, and has appeared on radio and television. 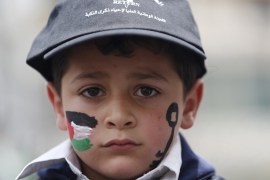 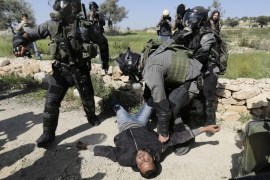 The US, Palestine and the pursuit of justice

US court ruling against PLO and Palestinian Authority maybe the best thing that has happened to Palestinians in years. 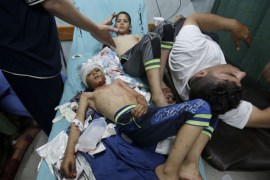