Another set of political demonstrations has taken off in the Arab world. This time it is in Lebanon, where a summer of rubbish in the streets has triggered street riots reminiscent of Tahrir Square. No one knows what all this portends, some hope and dream of a Lebanon “whole”, others dismiss the events or gaze at a conspiracy.

The Lebanese demonstrations come against a backdrop of a country without a president, and with a transitional government barely holding things together. Cabinet decisions cannot be made because of internal disputes over procedures and priorities, including appointments favouring one side or another. All is interlinked in a warp of self-interest, the drive for power and greed trumps clean streets and decency. Welcome to the future.

Before the rubbish issue, there was (and is) an electricity shortage, and wild uncontrolled speeding on the highways, missiles of death disguised as cars. The most basic of state functions is victim to favour, patronage, or the whims of local thuggery.

Indeed, in Lebanon, the state barely exists, it is hollowed out, weakened by narrow agendas, non-state actors and a Lebanese propensity to side with whatever local or regional group serves short term interest – or pays.

The response to the mess has been street demonstrations. What else can the citizen do in such a morass? Many of the organisers and protesters are decent, serious people who want real political change. However, after half a decade of such events in the Arab world and elsewhere, there is a question around the efficacy of “the street” as a method.

In Greece, the demonstrations rose to a very high pitch – before the government folded rapidly in the face of fiscal realities and an economic abyss. In Egypt, they led to a change of government  – and the return of the military, the ultimate establishment power.

In Syria, peaceful demonstrations were outmuscled by the ruthless Bashar al-Assad, and hijacked by extremists. There is indeed the serious risk of “hijack”, of other powers taking advantage and filling the temporary void of protests that shake the system.

Tunisia is the only country that has seen some political evolution and a relatively coherent process. Can precarious Lebanon do the same? Those organising the demonstrations today may have all the right ingredients, but they face a well-entrenched and corrupt elite with many supporters. The latter are an underestimated problem: They are regular citizens with reflexes that maintain the status quo.

The reality may be that street demonstrations are more reflective of the disease than the cure. People get fed up and they signal loudly that something is wrong. However, there is a large gap between demonstration and the reform of political systems. The system may need a shock, but sustained and sustainable reform is the real game.

Demanding that vested interests create necessary space is fine, but voting them out may be more effective.

As Maya Baydoun, a Lebanese journalist, said: “The day that Lebanese youth start ridding themselves of worshipping their leaders and warlords, and start electing representatives based on merit not religion, then and only then will Lebanon become a developed country. In the meantime, what’s going on is shallow protest and definitely not a revolution!”

The larger problem here is one of political habits, at the top and the bottom. Culture diffuses in every direction, down, as well as up. A citizen unused to choosing wisely can go in many strange directions (eg, Donald Trump). This is where the real battle for the decent demonstrators lies: in long term change, and in changing the habits that created the problem.

In Lebanon, the context breeds distrust, and a short term mind-set. I remember a Lebanese woman railing against her leaders and their corruption. Not a minute passed before she told me that she would accept money to vote for x, y, or z. “Why not take advantage when they are,” was her logic. Her mind had two separate compartments: how others should behave/how she should behave. The corruption diffuses in every direction, up, down, in, out; she is not a solitary case.

In 2005, the anthropologist Jared Diamond wrote a book called “Collapse – How Societies Choose to Fail or Succeed.” He explained how societies like the Khmer and the Mayan collapsed. He also mentions how Iceland and the southwest Pacific island of Tikopia were successful in meeting the challenges. Importantly, he indicates as keys to that success “long term planning and willingness to reconsider core values”. Neither is happening in Lebanon.

What we may now be seeing is the collapse of Arab states under the combined brew of globalised economics, climate change, resource depletion, and corruption. There is a large mismatch between governance capacities and the challenges ahead. Today’s problems may seem like nothing in the face of what’s coming.

During my recent summer stay in Lebanon, road rage led to a car chase and a public murder in downtown Beirut. In another case, an army officer was killed point blank for no reason other than the untamed egos of young men. Rubbish piled up in the streets while the young and cool party on rooftops. Scenes from Blade Runner may no longer be as distant as they once seemed.

Lebanon may solve its rubbish crisis in the near future. It may even create a national dialogue to mitigate some of its problems. But, the desire to consume and survive, to forget, seems strong – the impulse for immediate gain may bury the future.

Is there a way out? The question is whether people are ready to pay the price for it, and forego something now for future gain. In Greece, despite the street noise, leaving the euro was not an option. So far, people prefer to pay the price of staying in, with the handcuffs that come with it.

In Lebanon, the price is to stop favouritism and privilege, get out of sectarianism, and out of the games of regional power. It’s a decision to abide by the law, even when others don’t. It’s a tall order but it’s the price of avoiding collapse, it’s a “willingness to reconsider core values”.

The option is there to change political culture, and pursue a sensible system where material and emotional needs of people are clearly met. But, it seems, leaders won’t let the Lebanese do it – or they won’t let themselves.

Old habits die hard, but the journey of a thousand miles begins with one step (maybe one step more than a street demonstration). If Iceland and Tikopia can do it, surely Lebanon can. 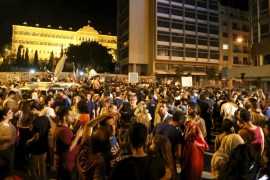 Bahrain, Kuwait and Saudi Arabia issue warnings after escalation of protests that began over uncollected rubbish.