Hordes of black clad fighters overrunning historic Middle Eastern cities, brutal Hollywood-style executions and thousands of recruits flocking from across the globe has made the Islamic State of Iraq and the Levant (ISIL) a priority enemy as its shift from contagion to pandemic gathers momentum.

The wide ranging informal coalition – which is united in the fight against ISIL – grows larger and more committed by the day, with the significant addition of Turkey last month being seen by many as a “game-changer”.

RELATED: The deep roots of Turkey’s war on ISIL

ISIL is described by world leaders as evil incarnate, barbaric and inhumane, a virus rather than a human creation that needs to be destroyed.

So how evil is ISIL? Is it an evolution in both the ideology and application of violence, or rather, does it represent the “perfect enemy”, which allows a variety of political actors to pursue their own agendas under the guise of fighting them?

Whether it’s the Turks looking to address domestic issues concerning their Kurdish population, the Syrian regime looking to divide those opposed to it, or European countries implementing wide-scale domestic security policies, many are fighting ISIL in different ways for substantially different reasons.

However, the umbrella of “irrational evil” that places ISIL on the same plane as the Orcs from Lords of the Rings, allows actors to pursue policies without the same degree of scrutiny and critical interrogation.

Firstly, observers of ISIL often fall into the trap of being ahistoric.

The fighters did not suddenly emerge unheralded from underground, but rather were the product of the state collapse and civil strife that followed the 2003 Iraq War and the 2011 Syrian conflict.

There is much misinformation being circulated about the scale and origins of sectarianism in the modern Middle East – but there can be little doubt of how ISIL chooses to use it as a source of legitimacy.

By demonising ISIL, you remove any sense of needing to understand that legitimacy, and instead, focus entirely on whatever response you choose to pursue.

A Pentagon press briefing last year laid out in no uncertain terms that ISIL fighters “are an imminent threat to every interest we have”, while world leaders have engaged in an arms race to see who can describe ISIL in the harshest terms.

Last year, US President Barack Obama described ISIL as a “network of death” and warned that “there can be no reasoning – no negotiation – with this brand of evil”.

British Prime Minister David Cameron, meanwhile, has described the fight against ISIL as the “challenge of a generation”.

The straw dog of ISIL hides in the shadow of every issue political leaders want to address. In the absence of nuance, the spectre of ISIL will be conflated with the reality of an organisation, to the detriment of any coherent strategy.

The candidates for the next US presidential election are also getting in on the debate with Jeb Bush blaming Hilary Clinton for the rise of ISIL, and Senator Lindsey Graham warning that “if you don’t do what I’m talking about, you’re not serious about destroying ISIL”.

So is ISIL evil or does it simply use the tools of globalisation and abhorrent tactics?

In John Gray’s book, Al Qaeda and What It Means to be Modern, the philosopher warned that we were witnessing the growth of a “privatised form of organised violence worldwide”.

Closed online communities are acting as echo chambers that are corroborating world views and shifting notions of what is and isn’t acceptable.

Suicide bombings of the 1990s appeared in the zeitgeist of evil tactics, but the theatre-managed, mass executions that ISIL specialises in show how far these tactics have developed.

ISIL networks flourish in a potent mix of history and conspiracy theory of Western subjugation of the Middle East that allows often vulnerable people to be attracted to the promise of a new “caliphate” that seeks its roots of legitimacy in the narrative of a glorious past.

ISIL’s propaganda machine, a key component in the success of the group achieving worldwide notoriety, must revel in the language used against it.

Just as its flag is black and white, so is the binary that it uses of “them and us”, and language-shaping images of a clash of civilisations that further encourage recruits and supporters to flock to the cause.

There is an increasing need for nuance, complexity, and challenge in the debate over who ISIL is and what the right tactics to defeat it are.

The straw dog of ISIL hides in the shadow of every issue political leaders want to address. In the absence of nuance, the spectre of ISIL will be conflated with the reality of an organisation, to the detriment of any coherent strategy.

Indeed, while the coalition aligned against ISIL is impressive in both its scope and its language, its clear weakness is its vision for how to fight this fight beyond the short term.

Ultimately, deploying the language of “evil” against ISIL is lazy, naive, and often counter-productive. What these words invoke plays into the hands of those in the group who revel in the images of their savage notoriety and are purposefully painting a picture of a millennial conflict that will last generations. A grim prospect indeed. 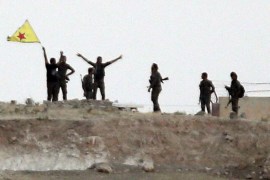