Iraqi General Futayih al-Rawi and four Republican Guard divisions under his command have surged across the Iraq-Kuwait border. Iraqi Special Forces assault Kuwait City with a helicopter and sea-borne attack.

By 5:30am these forces envelop Kuwait City. And by 2pm the Iraqi invasion force is in full control of Kuwait.

This invasion took less than 24 hours, and yet 25 years later, the region, particularly Iraq, still bears the consequences of what happened on August 2.

The invasion of Kuwait set Iraq and the United States on a collision course leading to the 1991 Gulf War, more than a decade of ensuing sanctions and continued enmity that resulted in the invasion of Iraq in 2003.

The collapse of the state in 2003 ultimately created the domestic conditions that led to the emergence and rise of the Islamic State of Iraq, which later added the Levant to its theatre of conflict, becoming ISIL.

The formation of ISIL is implicated in a historical trajectory that began on August 2, 1990.

Saddam Hussein’s incorporation of Kuwait as its 19th province bears striking similarities to ISIL’s invasion of Mosul in the summer of 2014. Both served as an attempt to permanently change the borders of Middle Eastern states.

In the history of the Arab state system, many of its borders were formally delineated due to the collapse of the Ottoman Empire after World War I, resulting in the emergence of the Anglo-French mandates of Iraq, Jordan, Palestine, Syria, and Lebanon.

The formation of Israel proved a shock to the system; nevertheless Israel emerged within the borders of the British Mandate of Palestine.

Israel invaded the Sinai, Golan Heights, Gaza, and the West Bank in 1967, but with the exception of East Jerusalem, Israel, as of yet, has not officially incorporated the Occupied Territories into Israel proper.

Syria invaded Lebanon in 1976, but exercised a de-facto occupation of the state until popular protests in 2006 led to the withdrawal of Syrian forces.

On August 2, 1990, Saddam appeared to follow the Syria-Lebanon model, turning Kuwait into a satellite state, similar to Hafez al-Assad’s relationship with Lebanon.

Saddam claimed that he invaded Kuwait to support a local uprising against the Sabah royal family, and put a pliant ruler in its place.

This facade of maintaining an independent, yet pliant, Kuwait could have satisfied all of Saddam’s war aims: eliminating Iraq’s debt to Kuwait from the Iran-Iraq War, granting Iraq’s navy an outlet to the sea, and ensuring respect and fear from his Gulf neighbours, without incurring alienation from the Arab and international world for occupying a sovereign state.

The Iraqi leader might have withdrawn from Kuwait in return for retaining the entire Rumaila oil field that straddles the Iraq-Kuwait border, and developing the Kuwaiti Bubiyan and Warbah islands as an Iraqi naval base.

What would develop during those days would set into motion the events that culminated in the 1991 Gulf War.

On August 6, 1990, the United Nations Security Council Resolution 660 condemned the Iraqi invasion and demanded that Iraq withdraw from Kuwait.

On August 7, the US president, George H W Bush, ordered the military to deploy to Saudi Arabia, drawing an infamous “line in the sand” against Iraq.

Saudi Arabia’s permission to allow US forces to deploy on its soil made it impossible for Saddam to consider leaving Kuwait without seeming weak, and caving into Saudi and US pressure, a move tantamount to a surrender.

To galvanise and mobilise Iraqis into action, Saddam now had to convince his security forces, military and the public that they were defending an integral part of the nation from external aggression.

Kuwait would have to become Iraqi. The Kuwait-Iraq border could no longer exist.

Within less than a week since the invasion, on August 8, Saddam issued the order to annex Kuwait, a decision justified by the following statement.

“Even though direct colonialism was gone, foreign rule still dominated our region through their agents and lackeys. One of the worst criminal acts of colonialism was when they divided the Arab nations [who were as one, when Baghdad was the capital of the Arab nation] and even after many of the Arab areas got their independence the enemy still continued with their evil actions.”

Kuwait’s annexation, in his words, was not territorial aggrandisement, but a reversal and rectification of the borders established by the “scissors” of British colonialism and imperialism.

This speech on August 8, resonates with ISIL’s declaration in June 2014, that it had reversed the Sykes-Picot Treaty, a reference to the secret treaty developed during World War I where France and Britain made plans to carve out territory they would control once the Ottoman Empire collapsed.

When ISIL forces took control over the Syrian-Iraqi border post on the way to Mosul, it crafted a well-publicised spectacle erasing what it deemed as the “Sykes-Picot” border.

By erasing the Iraq-Kuwait border, Saddam could claim he reversed the British machinations that led to the separation of Kuwait from the Ottoman province of Basra, the latter of which would later go on to become part of the Iraqi state.

Both Saddam and ISIL sought to situate their aggressions beyond their local conflicts and war aims to a grander rectification and reversal of British and European imperialism that carved up an organic core of the Arab nation (in Saddam’s view), or a Muslim nation (in ISIL’s view).

In both cases, Saddam and ISIL employed a constructed past where Iraq, the Arab, and Islamic world suffered from traumatic divisions and colonial humiliation, and their actions would reverse decades, if not a century, of that trauma.

Notwithstanding the differences between Saddam Hussein and Abu Bakr al-Baghdadi, the self-proclaimed caliph of ISIL, their actions, 25 years ago and one year ago respectively, bear similarities.

Both Saddam and ISIL portrayed their offensives as a corrective measure.

In altering the status-quo borders, Saddam sought to portray himself as the leader of the Arab world through rectifying the imperial past, while Baghdadi claims both religious and temporal authority among believers within his state and among the world’s Muslims.

August 2, 1990, was the first time an Iraqi leader succeeded in altering the borders of the Middle East, an action that was undone by the 1991 Gulf War.

What the current war against ISIL, in which the US plays a dominant role, represents is the maintenance of the status-quo borders in the Middle East, as they did in the 1991 Gulf War.

The Gulf War liberated Kuwait, but did not result in stability in the region. It led to the 2003 Iraq War.

The US-led campaign against ISIL will liberate Iraqis from its brutal rule. Yet, the question remains as to whether this current campaign will also bring about similar, unintended consequences. 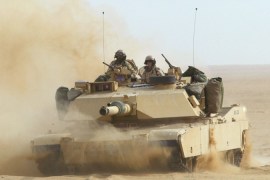 More than two decades on, we look at the around-the-clock coverage that changed television news forever. 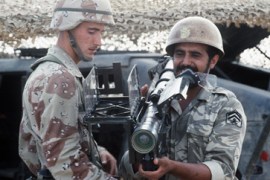