Today marks the anniversary of Israel’s “Operation: Protective Edge” that wrought havoc across the Gaza Strip killing over 2,200 Palestinians, injuring another 11,000, and causing unprecedented damage to Gaza’s healthcare sector.

It is a continued scandal that, as I now write 12-months on, not one of the 19,000 homes that were destroyed or severely damaged has been rebuilt, and over 100,000 people remain homeless. The Middle East is in deep turmoil with the rise of ISIL and the spread of chaos from Syria to Yemen.

In Gaza, something can be done – but, whether by accident or design, the humanitarian imperative has been sacrificed to a political logjam that leaves us facing the inevitability of further conflict.

The failure of political actors to realise their humanitarian responsibilities is shocking. Israeli Defense Minister Moshe Ya’alon briefed diplomatic correspondents in June that “there is no humanitarian distress in ‎Gaza”.

I’m not sure if Ya’alon has been to Gaza recently, but on my trips I have seen a very different place. A place where the failure to recover from the recent devastation continues to drain away any hope for a better future.

Surgeons having to operate by the light of their mobile phones due to power cuts, 30 percent of essential medicines at zero stock, and patients denied permission to travel for life saving care are just some of the distressing aspects of daily reality in Gaza.

Some 60 percent of Gaza’s young people are unemployed; tens of thousands of public sector workers have not been paid for months; 120,000 Palestinians are not connected to the water network due to unrepaired damage.

Following last August’s ceasefire, the “Gaza reconstruction mechanism” (GRM) was designed as a temporary mechanism to facilitate the import of essential construction materials, such as cement, aggregate and reinforcement steel bars.

The GRM depends on the UN and the Palestinian Authority taking effective responsibility for the proper use of the materials once they are delivered. Yet what some are calling “the only game in town” is barely being played: donor pledges have not been honoured and construction materials are not getting in in anything like sufficient quantity.

It’s time to acknowledge that Palestinian unity, for all the talk of a unified government, is regressing rather than progressing. It is the civilians in Gaza who are paying the price for these political failures. The international community cannot, and should not, base the opening of Gaza to humanitarian aid on there being a political resolution first.

Donors appear to be awaiting the emergence of a genuine unity government from the chrysalis of years of division and distrust – a prospect which is both unrealistic and unsustainable.

The intercepted flotilla of boats carrying aid to Gaza may have made some headlines but even if they had got through this cannot be a sustainable means of supporting the lives of 1.8 million people.

Open borders with adequate supplies of all essential items and the free movement of patients and medical professionals are not unrealistic asks yet continue to be obstructed.

It doesn’t have to be this way. It must be possible to put in place mechanisms to ensure that materials are put to their proper and intended use.

There is, I believe, a vital role to be played here by the UN as the leader on Gaza’s humanitarian aid and recovery that places both principle and cold hard practicalities over dysfunctional politics.

We cannot continue with this phase of inertia in which vulnerable Palestinians, whether newborn babies requiring medicines or cancer patients requiring specialist care, are denied their right to health because of the failure of politicians. 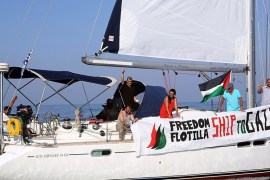 It’s time for a Gaza seaport to end the siege.