In his televised address to the nation just a few days before yesterday’s so-called bailout referendum, Greek Prime Minister Alexis Tsipras appealed to voters’ emotions and their national pride and urged them to say “No”. In turn, he assured them that he will personally find a solution with Greece’s creditors, even though he failed to do so after five months of non-stop negotiations.

Greek Finance Minister Yanis Varoufakis continued in the same vein, promising a better deal within 48 hours if the country votes against the bailout package proposed by the eurozone officials on June 25, although he resigned (or was asked to resign) the day after the referendum in an obvious attempt on the part of the Tsipras’ government to send a conciliatory message to Brussels and Berlin.

Apparently, political rhetoric worked its magic again with Greek voters as the “no” vote prevailed by a very wide margin in a ridiculous referendum over a proposal that was no longer on the table and while the bailout programme had already expired.

Indeed, in so doing, Greek voters seem to have forgotten that the Syriza government has evolved into a master of lies and deception.

At the June 22 euro summit, the leftist Greek government submitted a proposal that was very much in line with the logic of the infamous troika’s bailout programme, although both Germany and the IMF still found it “insufficient” and placed demands for more blood and tears.

In addition, a few days after the decision for a referendum had been made, the Syriza government sought to get approval for a new two-year bailout programme, in exchange for 29 billion euros ($32bn), only to be turned again by the eurozone’s hegemon, with German Chancellor Angela Merkel stating rather laconically that there can be no further talks before the referendum.

But this is typical of how the Syriza-led government has been approaching negotiations with Greece’s creditors for the past five months: defiance one moment and capitulation the next.

The latest gimmick of the Tsipras’ government, ie, to call  a referendum, was made so the government would not collapse as many of its own MPs had stated that they would not support an agreement with the creditors that reinforced austerity and anti-social policies that have shrunk Greece’s GDP by more than 20 percent in the last five years, raised unemployment rates to stratospheric levels (over 25 percent), lowered standards of living significantly, and brought the public healthcare system to its knees.

So what happens next? Will the Greek government be able to reach an agreement with its creditors as quickly as Tsipras and Varoufakis believe, or have the odds of a  systemic risk default (Greece has already failed to make a 1.5 billion euro – $1.7bn – payment to the IMF) and a Grexit increase dramatically because of the “No” vote?

Indeed, while Varoufakis was telling Greeks that an agreement with the creditors could be clinched in a day or two following a “No” vote, a few hours before the referendum he was hinting that the government is getting ready to face war-like situations.

But as already noted, lies and deception are Syriza’s main tactics since it came to power in late January.

The truth of the matter is that the outcome of the referendum has put Greece and the eurozone in uncharted waters.

The ECB, which convenes today to take note of the latest developments in Greece, is highly unlikely to increase Emergency Liquidity Allowance (ELA) limits for Greek banks, which are already on the verge of collapse, but it is also most unlikely that it will make a decision to pull the plug on the Greek banking system so quickly.

Either way, Greek banks are expected to remain closed this week, thereby intensifying the agony for millions of depositors and bringing the economy under greater pressure.

The “No” vote will also strengthen the hand of those who prefer to see Greece out of the euro – and that includes primarily German Finance Minister Wolfgang Schauble.

The Greek government’s belief that a “No” vote will force Europe’s leaders to become “softer” towards Greece reflects a journey into self-delusion, thus making the Syriza government not only thoroughly incompetent but also dangerous.

If the pseudo-leftist government in Athens was serious in its desire to put an end to the five-year-old ordeal of the Greek nation caused by the austerity-driven dogma behind the bailout programmes, it would have called a referendum on whether or not Greece should remain in the eurozone.

As things stand, if the creditors continue to play hardball with the Tsipras government after the referendum, and Greek banks collapse, the transition to a national currency is simply inevitable.

However, the process of setting up a new currency could take months, and the Syriza government has no such plans in place, which means the Greek people will experience unspeakable pain and suffering, particularly the poor, the working class and the most vulnerable segments of the population.

Indeed, indicative of how dangerous this government really is, one of its own MPs assessed the banking situation in Greece, where capital controls are in place, limiting withdrawals to 60 euros ($66) a day, as one which is in the process of being “stabilised”, and then went on to say that it will become even more stable as Greeks “get used” to the current situation.

In turn, the Greek minister of productive reconstruction, environment, and energy did not hesitate to describe the referendum that just took place as an “experiment”.

Yet, an uglier truth is that Greece is in a real a mess and even debt restructuring will not be enough to get its economy going again. Aside from facing a severe competitiveness problem and mass unemployment, its pension system is on the brink of collapse.

In addition, Greece is a country with a uniquely rapidly ageing population while many of its best and brightest young people are leaving.

The country also needs to undertake deep reforms in its public sector institutions whether it stays in the euro or returns to a national currency.

These are issues and problems which any government would have to face regardless of its ideological orientation, and surely will not be solved on account of Sunday’s referendum. 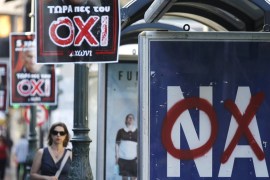 Rubber-stamping the end of the European social model.