It is a terrible world in which decapitation is so routine it becomes nearly mundane and mass executions fail to shock. Despite this desensitisation, the events of June 26 – the mass killings across three continents – have grabbed all the headlines.

Contrary to appearances, these actions might spell the beginning of the end of the Islamic State of Iraq and the Levant’s (ISIL) larger “psychological battle”. They may present those who oppose them with the opportunity to unite, and bring about ISIL’s downfall.

Many wars have been lost before the battles truly began. Those that have played competitive sport may recall the feeling of impending doom when facing an opponent appearing to be your superior – the David and Goliath scenario.

Genghis Khan and his Mongol hordes won many of their battles based upon their fearsome reputation and the widely circulated tales of their merciless post-victory actions.

From what I’ve seen in Syria and Iraq over the last two years, ISIL is playing the psychological game far better than its opposition. Some are so terrified of ISIL that they flee the battlefield before a single shot is fired. This is, of course, the best and most efficient way to fight – winning through intimidation alone, without bloodshed.

Recognising and accepting your enemy’s strengths and weaknesses is the first step towards bringing about his defeat.

As a chemical weapons expert, I generally don’t stray out of my field of expertise, but I have seen the psychological impacts of war and terror many times over the last 27 years on the battlefields of the world.

I have personally witnessed the impact psychology can have on the outcome of war. It is a tactic as old as conflict itself. The public’s perception of ISIL’s capability to terrorise is far more effective than the actual physical threat they pose.

Some of the most successful soldiers and tyrants throughout history, like Genghis Khan, have used extreme terror to win battles.

Chemical Biological Radiological Nuclear (CBRN) weapons are the ultimate tool of physiological terror in warfare, as seen in World War I through to Syria and Iraq today. It is my concern that ISIL could turn towards the use of CBRN to attempt to maintain their psychological advantage.

Australia’s Foreign Minister Julie Bishop has recently stated that “The use of chlorine by … [ISIL] and its recruitment of highly technically trained professionals, including from the West, have revealed far more serious efforts in chemical weapons development.”

While CBRN weapons carry with them a powerful atmosphere of dread, they actually kill relatively few people. They are responsible for less than one percent of the casualties of World War I and the current conflict in Syria, but have psychological impacts far beyond their physical effects.

My experience in Syria is that people are more scared by chlorine barrel bombs than conventional ones, but the latter are actually far more dangerous. The story of the Talib family suffocating in chlorine gas while trapped in their cellar in Sarmin in March, is an example of bringing the horrors of poison gas to the world’s attention, much like the tales from the trenches of World War I.

A senior Iraqi general told me recently that ISIL loaded scorpions into pots and lobbed them into towns to terrify children. He told me that ISIL is trying to introduce Bubonic plague into refugee camps, and that they were intending to manufacture an improvised nuclear device (IND) out of the uranium they have in Mosul. All of these are examples of how the mythos of fear has been constructed around ISIL.

Bubonic plague is now easily treated with antibiotics and the uranium in Mosul will be enriched to a maximum of 20 percent when it needs to be at 80 percent to be used in a viable IND. This is, at present, well beyond ISIL’s capabilities.

ISIL forces are less trained, less equipped, and don’t have the backing of the most powerful air forces in the world like those who oppose them – so why do some of those opposing forces turn and run when confronted with this enemy?

It appears that ISIL has broken into the collective consciousness of these people and defeated them from within. The threat of capture, and the knowledge of what monstrous things ISIL forces are capable of committing, is always on the mind of anyone facing them. We must actively fight against this kind of overwhelming fear if we ever hope to defeat ISIL.

It is important to remember that this corruption of collective consciousness is not limited to soldiers on the battlefield. The global public now views ISIL bombings, mass killings, and decapitations as almost routine. So how do we combat this combination of world desensitisation and localised intense fear in our efforts to fight against them?

There must be a globally unified campaign to oppose ISIL and dash these notions of its invincibility. It is only with a comprehensive approach across Tunisia, Kuwait, France and all countries and peoples who oppose ISIL that we can destroy the ISIL myth which sustains them.

Exceptional and unified leadership is required from the international community to organise both a physical and psychological demonstration that ISIL can, and will be, defeated. The Kurds have managed to show this at Kobane in Syria and the Iraqis at Tikrit – these victories should be a building block for the future.

One way global opposition can counter ISIL’s psychological campaign is through reverse psychology – a campaign to take the myth out of ISIL.

To achieve this, those opposing them must realise that ISIL fighters are not endowed with superhuman abilities by any stretch of the imagination. For instance, the youth from the UK who join ISIL have no military training and are thrown onto the front-line almost as soon as they arrive in Syria. They would be no match for a British soldier who does at least a year of training before getting anywhere near the front.

ISIL is simply no match physically for a global coalition lead by the US, UK, GCC, Australia, etc. These countries are going to need to provide more support forces and perhaps even “boots on the ground”.

With a unified coalition in place, or at least promised, the determined effort to win the critical psychological battle can begin in earnest – a mental battle fought in the minds of the masses which is required for the physical war to realistically succeed. Only then might we witness the beginning of the end of ISIL’s reign of terror. 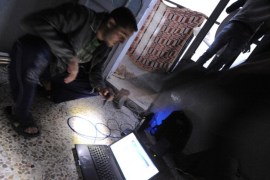