Refugees are by definition unlucky.

They have been uprooted from homes and families, suffering the horror and tragedies that befall those tossed like flotsam atop the waves of history.

They have lost what much of the Arab world as a whole risks losing as a consequence of the ongoing bloody destruction of the old order – the loss of control over their destiny – as individuals, and as Arab citizens.

Reem Sahwil is one of these millions looking for a secure place in the world. The granddaughter of refugees from Palestine, Reem is one of an estimated 1.5 million Palestinians living in 58 refugee camps in Jordan, Lebanon, Syria, the Gaza Strip, Jerusalem, and the West Bank.

Today, less than 50,000 of the almost five million Palestinians considered by the UN to claim refugee status have actually ever been at home in their ancestral homeland.

During the last few decades, primarily as a consequence of the Oslo agreement (1994), only approximately 100,000 have “returned” – to the occupied territories however, rather than to Israel.

Reem left a refugee camp in Lebanon for Germany four years ago.

Her journey – the exchange of a life in the camps for an uncertain future in the heart of Europe – already placed her and her family among the elite of the world’s homeless and stateless.

She has made the best of the last four years, learning to speak German, leaving the hopelessness of life in camps behind, and seeing the opportunities to make a better life for herself open seductively before her.

No one denies the scale of the challenge that Germany – and not Germany alone – is facing. The number of refugees arriving in Germany continues to grow. So far this year, the number of asylum applications, at 450,000, is more than twice the total for the whole of 2014.

So when German Chancellor Angela Merkel met a group of 14- to 17-year-olds in the city of Rostock the issue was front and centre.

But it is also true that it is more difficult to harden your heart when the abstraction becomes a real person, especially one as beautiful as the warm-blooded, telegenic, and sympathetic Reem.

The programme, ironically titled “The Good Life in Germany,” was in fact yet another cruel joke.

Far from the promise of a good life and unlimited horizons in Germany, the essential uncertainty of life as an asylum seeker was on unforgiving display for the entire world to see.

Reem and her family were told that they would have to return to a refugee camp in Lebanon – a fate merely postponed by a last-minute temporary residency permit for Germany.

“I would like to go to university,” Reem told Merkel in fluent German.

With a poise beyond her years, she exhibited an unfailing ability to present Merkel – and Germany – with the essential crisis in her life and the dilemma facing her adopted country.

“It’s really very hard to watch how other people can enjoy life and you yourself can’t… I don’t know what my future will bring.”

Merkel had only ice water to offer to this charming individual and the compelling challenge she presented.

“Politics is sometimes hard,” Merkel sputtered. “You’re right in front of me now and you’re an extremely sympathetic person. As you know, in the Palestinian refugee camps in Lebanon there are thousands and thousands, and if we say you can all come we cannot manage that.”

Where Reem was compelling and sympathetic, Merkel was stone-faced and business like, with only an awkward hint that Reem had actually touched her heart.

Merkel’s strengths evidently lie elsewhere. Hers was the response of a bookkeeper, who peers down at her ledger and explains that as much as she might like to, there is absolutely nothing she can do.

“You were great,” Merkel offered inadequately. “I know it’s difficult for you and you presented the situation that many others find themselves in extremely well.”

Merkel’s heartless reply denied Reem the opportunity to hope – for an end to her family’s trek, spanning generations and continents, for a secure place to live out their lives in peace.

The chancellor’s response was typical of the reply writ large across the globe – sympathetic words but no action.

Perhaps Markel’s heart was indeed melting – as ours did – before Reem’s challenge, just as it does when we see the empty boats capsized in the Mediterranean or the hopeless existence in Syrian refugee camps like Azraq in Jordan.

But then a new breeze blows, the moment passes, our attention falters, and our hearts are hardened once again.

Reem, unlike many of the millions, who thanks to the internet, witnessed her encounter with the powerful forces that play with her fate, saw nothing unusual in Merkel’s chilling verdict.

Reem told ARD television: “[Merkel] listened to me, and she also told me what she thinks about it, and I think that is OK.”

Fortune, which has played so cruelly with Reem and her family, this time has come to her rescue.

In the days following the show, and the international attention it commanded, German bureaucrats announced what Merkel could not – Reem and her family would indeed be granted the coveted permit to remain in Germany.

By this twist of fate, at least this one family has been granted the tremendous good fortune to rise above the tide of history that has swept generations of Palestinians – stateless and adrift – before them.

“I don’t know the personal situation of this young girl, but she speaks fluent German and has visibly lived here for a long time,” said the minister for integration, Aydan Ozoguz, according to the website Spiegel weekly.

“This is exactly why we changed the law, so that well-integrated youths can have a new residency permit through a new immigration law that came into force in August.”

The Palestinians are living proof that the trauma of statelessness that many in the Arab world are now suffering will not be solved overnight, if ever.

While many will find new lives and destinies, their good fortune will be more a matter of luck than the result of efforts by leaders like Angela Merkel to find enduring political solutions for their sorry predicament. 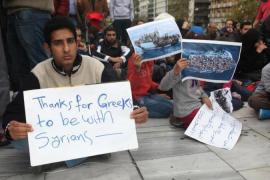 Syrian refugees in Europe: The law is not on their side

Europe should do more than export arms to war zones. 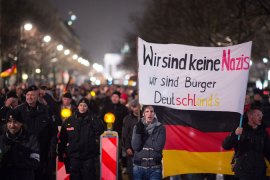 Participating in community event, German chancellor speaks out against marginalisation of Muslims or other minorities.