The UK Prime Minister David Cameron has delivered his second speech in as many months on the terrorist threat, proposing a top-down reorganisation of British Islam.

His new approach will see “moderate” and “reforming” voices sponsored by the central government.

This has provoked a mixed response from British Muslims. It is also a remarkably unconservative approach to personal belief, from a supposedly conservative prime minister.

Cameron’s understanding and presentation of the jihadist threat is that radical Islamist ideology, not Western foreign policy, explains all.

In a single sentence, his speech dismissed the latter notion: “9/11 – the biggest loss of life of British citizens in a terrorist attack – happened before the Iraq War”.

In 1992, adherents bombed a hotel in Aden, Yemen. In 1998, they killed 200 by bombing US embassies in Kenya and Tanzania. In 2000, militants bombed the USS Cole, killing 17 sailors, and a day later – operatives launched a grenade attack on the British embassy in Yemen.

Nearly a decade after their first attack, al-Qaeda executed the 9/11 bombings.

It is important to recognise that Cameron’s dismissal of foreign policy grievances, in favour of an ideological explanation for anti-British terrorism, is not completely off the mark.

There is clearly a gluey ideology shared between extremist groups like al-Qaeda and the Islamic State of Iraq and the Levant (ISIL). Both groups have long enumerated a list of perfectly legitimate political gripes, both local and global, and mainly within the West’s purview.

It’s just that the West doesn’t want to solve them, so it’s far more convenient to focus on an academically interesting but pragmatically insignificant aspect: “ideology”.

Much of this ideology is self-serving, incoherent, fantastical or immoral. It is also a religious ideology, meaning Cameron’s focus on it is fraught with political risk. He isn’t too fussed – in the most recent British general election, he found time to personally visit churches, synagogues and temples, but not a single mosque.

On the ideology v political grievance dynamic, al-Qaeda has long demanded an end to “the Christian-Zionist crusade”, alluding to Western support for the Israeli government, and a perception that the West is waging a war against Islam.

While the invasions of Iraq and Afghanistan were not religiously motivated, as radical ideologies insist; millions of Westerners share the more rational component of al-Qaeda’s sentiment; that the invasion of Iraq was unjustified.

Similarly, while the anti-Semitic ideology of radical Islamists should not be indulged, there is a legitimate discussion to be had around Western succour for an expansionist Israel.

Cameron is right to denounce “Jewish conspiracy theories”, frequently espoused by radical groups as they recruit and brainwash Western Muslims.

That being said, pro-Israel (not Jewish) funding and influence is a real and enduring phenomenon in British politics; one which deserves discussion.

Yet, says the reasonable critic; we have given into jihadists’ demands in the past, and the violence did not stop! Surely this proves that ideology trumps their political seriousness.

Did this sate al-Qaeda aggression? Hardly – yet that same year, the US also invaded Iraq. Washington then backed a former underground radical as the prime minister of Iraq, Nouri al-Maliki, who proved himself a corrupt autocrat at the first opportunity.

Maliki perpetrated mass human rights abuses against Sunni Iraqis, who in return have offered soft support in their millions to the Islamic State of Iraq and the Levant (ISIL).

Further playing into the “crusade” narrative portrayed by al-Qaeda and ISIL – we are now fighting in a “US-led coalition”. Why not a Muslim-led coalition?

In any case, the CIA also covertly remained in Saudi Arabia, choosing to launch indiscriminate and extrajudicial drone raids on Yemen from a secret base within Islam’s holiest land.

The American media even conspired to prevent news of this base reaching public ears.

On dictators, Cameron has welcomed the reinstallation of autocracy in post-revolutionary Egypt; inviting President Abdel Fattah el-Sisi to 10 Downing Street – the official residence and office of the British prime minister – later this year. The Americans have also resumed military aid to Egypt, despite Sisi’s bare-faced human rights abuses.

That resumed status quo continues an enduring tradition in which Western leaders enthusiastically support Middle Eastern autocrats, largely in a bid to secure cheaper oil and “political stability”, even if that stability is only temporary.

“Without the US these regimes could not survive“, as former US Secretary of Defence Donald Rumsfeld judged the situation back in 2004.

With Western backing, every political and economic failure of these near or actual dictatorships has led to vast recruitment opportunities for radical groups.

Those detained by the region’s security services are frequently tortured and receive unfair trials, further expanding their appeal.

And the Arab Spring, which precipitated a dramatic rise in the number of jihadist groups, bears testament to the fact that backing dictators to secure short-term security and commercial interests creates only turmoil in the future.

Cameron’s view that ideology is the key driver of terrorist attacks against British citizens, will predicate which “reformist” Muslim voices he now chooses to engage with.

An early clue is that Quilliam Foundation, a British think-tank which is disinclined to criticise Western foreign policy, assisted Cameron in writing his speech. Among its sponsors are key architects of the 2003 invasion of Iraq.

Cameron would do well to ignore their advice. “It’s the ideology, stupid,” as another adviser on counter-extremism issues, Justice Secretary Michael Gove, puts it. Few things in life can be explained away so glibly.

In reality, addressing ideology here will not address ideology in the Middle East, and unless Cameron intends on completely shutting down the internet – that ideology will continue to make its way to the UK.

Redressing genuine political grievances as comprehensively and widely as possible is not only the right thing to do – it will stop the recruitment. And without recruits, al-Qaeda and ISIL will be nothing. 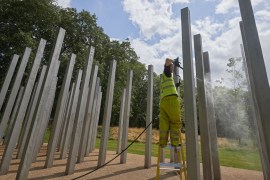 Talk of religiosity and ideology is a convenient media smokescreen put about by politicians to avoid tough discussions. 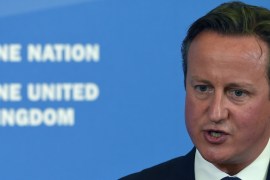 Failure to be fully inclusive has allowed armed groups to recruit young people to join fight in Syria and Iraq, PM says.