Violence erupts, predictably, in Kashmir. The murder of another Kashmiri civilian, Muhammad Yusuf Bhat, on July 2 is a reminder of the hate in one of the world’s oldest territorial disputes.

A very real threat needs to be carefully defused, so as to avoid yet another war in the region. The people of Kashmir simply cannot afford another war – and so, the recently released and incriminatory Amnesty International report on the subject – aptly entitled “Denied” – cannot be ignored.

The report castigates Indian armed forces for their “grave human rights violations, which have gone unpunished”.

It is a timely rejoinder about the Kashmir conflict and its potential for nuclear escalation. Yet, despite the report’s meticulousness, it does not address the heart of the matter: Kashmir’s right to self-determination and the dangers of curtailing it.

Looking back, ever since the transfer of Kashmir by colonial British rule to foreign Dogra powers in 1846, Kashmiris have struggled for their independence.

Masters of their own destiny

Following the division of the British Raj in South Asia in 1947, which created the two new nations of India and Pakistan, the people of Kashmir were ecstatic at the possibility of voting to be a part of Pakistan, India, or for full independence.

Instead of achieving their democratic aspirations, familiar tyrants were replaced by new despots. Millions died in the resulting violence, which the Indian novelist Arundhati Roy described as the British “parting kick” to their erstwhile dominion.

Eventually, the Kashmir matter was brought to the attention of the United Nations Security Council in January 1948. A resolution was passed establishing a special commission to investigate the conflict.

Subsequent to the commission’s recommendation, the UN Security Council ordered another resolution in April of the same year, stating that Kashmir would be demilitarized and that a final decision would be determined in accordance with a plebiscite supervised by the UN.

However, this never happened. As a result, being denied their right of self-determination, Kashmiris have been in a state of chronic revolt for several decades.

The situation devolved even further after the hanging of Maqbul Bhat in 1984. An “insurgency” soon broke out, which led to the terrible repressive counter-violence throughout the 1990s.

From that moment on, there has been a transformation into a Palestinian style of stone-pelting resistance .

The violence in the region has been terrible. The proof of which is evident in the unearthing of mass graves, rape as a weapon of war, and the total deaths – by the Indian government’s conservative estimates – at 47,000 people in the last two decades. However, Kashmiri NGOs place the total deaths to over 100,000.

At present, the unpredictability of the extremists in Pakistan is posing a serious challenge. Nothing would be as catastrophic as Pakistan collapsing under the weight of 'militant tyranny'.

The dangers of ignoring the potential of a Kashmiri revolt go without saying. The threat of a outbreak of hostilities and rapid escalation of instability is ever-present between these groups.

The conflict has led to three wars between India and Pakistan, and nearly led both countries to a catastrophic nuclear war. In order to save the region from a total descent into chaos, a final resolution of the Kashmir issue must be reached.

This notion of peace is gaining ground with some senior officials within the US government, whom have been talking on similar lines.

President Barack Obama, himself, has expressed these views during his presidential campaign stating that he “will continue support of ongoing Indian Pakistani efforts to resolve Kashmir problem in order to address the political roots of the arms race between India and Pakistan.”

Collapsing under the ‘militant tyranny’

Former British Foreign Secretary David Miliband was even more forthright when he wrote “[T]he best antidote to the terrorist threat in the long term is cooperation. Although I understand the current difficulties, resolution of the dispute over Kashmir would help deny extremists in the region one of their main calls to arms, and allow Pakistani authorities to focus more effectively on tackling the threat on their western borders.”

At present, the unpredictability of the “extremists” in Pakistan is posing a serious challenge. Nothing would be as catastrophic as Pakistan collapsing under the weight of “militant tyranny”.

The Pakistani government is committed to end the “scourge of terror” that is affecting it, but they must be supported in this endeavour.

The best way to do that would be to move forward and compel all parties to construct a roadmap towards peace.

After all, the road to combating global extremist terror groups criss-crosses through Kashmir. This dispute is a major cause for radicalisation, and resolving it would cripple recruitment for certain “extremist” groups within the region.

If global resolve on this matter does not materialise through determined action and concrete measures, the opponents of peace will only become more entrenched and hardened in their mission of destruction. 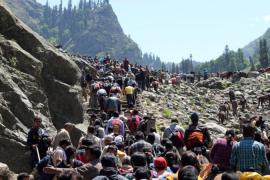 The recent push for tourism in the region may be more political than previously thought. 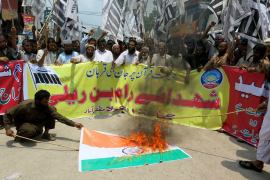 Kashmir: A never-ending cycle of violence?

As tensions between India and Pakistan flare up again, we examine the impact on attempts to resume formal peace talks.