In February of last year, Joaquin “El Chapo” Guzman – Mexico’s most-wanted drug lord and head of the Sinaloa Cartel – was captured in the resort town of Mazatlan in a collaborative US-Mexican law enforcement operation.

The InSight Crime website declared the “dramatic” event the “end of an era for Mexico’s underworld”, where “the new normal may be an increasingly chaotic criminal terrain”.

“Facing a more coordinated Mexican security strategy”, the co-director of InSight, Steven Dudley continued, “the next generation of criminal groups may find it impossible to replicate the empire Guzman created.”

But while there is no doubt about the chaos of the terrain, with more and more groups vying for a piece of the illicit pie, the era in question may not have been brought to such a definitive end.

This past weekend, Guzman escaped from Mexico’s Altiplano maximum-security prison, reportedly via a tunnel measuring 1.5 kilometres.

The “new normal”, it seems, might in fact greatly resemble the old normal – at least in terms of the tradition of coordination between Mexican security forces and the criminal underworld itself.

In their recent book – A Narco History: How the United States and Mexico Jointly Created the ‘Mexican Drug War’ – Carmen Boullosa and Mike Wallace provide the details of Guzman’s first escape from jail in 2001: “Having bribed his way into a comfortable-going-on-luxurious prison life, he now bribed his way out altogether, and rejoined his colleagues in the Sinaloa Cartel”.

In the case of Guzman v Prison, Round II, Mexican journalist Diego Enrique Osorno – author of The Sinaloa Cartel: A History of the Political Use of the Narco – observes that “a reporter’s first obligation is to get the official version of any given event, and the second is to not believe it” before conducting one’s own investigation of the matter.

Osorno notes that, prior to the Guzman jailbreak, the Altiplano facility was the exception to the rule of Mexican prisons, which by and large fail to perform their ostensible function.

At a certain incarceration centre in the state of Durango, Osorno writes, imprisoned hit men would depart the prison grounds to carry out homicidal duties in the neighbouring state of Coahuila and then return to their cells.

But security at the Altiplano was no joke, as a former resident of the same maximum-security-plus zone in which Guzman spent his days at the institution confirmed to Osorno over the phone.

And this former inmate is far from alone in hinting that Guzman’s exit would have required a high level of official complicity.

...it's useful to consider the US consensus that the real story of Guzman's escape is one of Mexican corruption... this view ignores the transnational causes of that phenomenon, many of which have to do with US drug policy itself.

According to Mexico’s La Jornada newspaper, although Guzman’s absence was detected Saturday evening, the Mexican military were not notified until the wee hours of Sunday.

Mexican President Enrique Pena Nieto, and a retinue of other top officials, were conveniently on another continent.

A Wall Street Journal article discussed the “frustration US officials feel with Mexico’s inability to keep the country’s most notorious drug boss behind bars”, particularly in light of available intelligence that he was plotting an escape.

Imagine, then, the potential frustration of the average Mexican citizen caught in the crossfire of the US-backed drug war in Mexico, which officially began in 2006 and in six years alone killed an estimated 70,000-109,000 people.

For starters, the US fuels the Mexican drug industry via domestic criminalisation policies that fail to curb in-house demand but do help line the pockets of Mexican narcos – and thus expand their political influence.

The empire’s qualifications for waging wars on drugs are, of course, even further diminished by reports of US collusion with none other than the Sinaloa Cartel.

Meanwhile, the pernicious effects on Mexican livelihoods of the North American Free Trade Agreement (NAFTA), another pet project of the US, have propelled many poor Mexicans into the drug trade as a means of survival.

A post-jailbreak tweet from Guzman’s allegedly official Twitter account warns President Pena Nieto: “Don’t you ever call me a delinquent again, because I give people jobs – unlike your f***ing current government”.

The Wall Street Journal refers to Guzman’s status as a “narco folk hero”, while Osorno describes him as a “plutocratic anti-hero” with a growing “criminal charisma”.

The Guzman Twitter account, which already boasts nearly half a million followers, is currently enjoying a surge in popularity.

A tweet with even more expletives was recently directed at US Republican presidential hopeful Donald Trump, although it was apparently removed after Trump contacted the FBI.

Still available for viewing on the web, however, is Trump’s threat to “kick [Guzman’s] ass”, as is his denunciation of Mexican immigrants as drug traffickers and rapists.

RELATED: A drug war made in Mexico?

Misanthropic musings aside, it is useful to consider the US consensus that the real story of Guzman’s escape is one of Mexican corruption. This reductionist view ignores the transnational causes of that phenomenon, many of which have to do with US drug policy itself.

And as long as cross-border systems of economic exploitation and hyper-militarisation prevail, with many a lucrative return for US industries, it’s immaterial on which side of the bars a notorious drug lord finds himself.

The flow of drugs and misery will continue. There’s no escaping that. 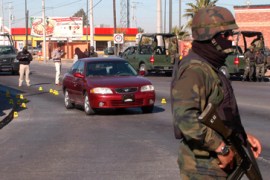 A Mexican crime reporter tells Al Jazeera about the dangers of covering the cartels.