As details of the international agreement over Iran’s nuclear programme emerge, the EU’s Foreign Policy Representative Federica Mogherini has described the deal as the beginning of a new chapter in international relations.

Certainly, the agreement will have implications that go far beyond the nuclear non-proliferation issues that the negotiators have been focusing on. And this means that a fresh diplomatic effort is urgently needed to deal with the potentially game-changing effects it will have on the Middle East. Without addressing the regional political tensions between Iran and its neighbours, a nuclear deal will exacerbate them.

One of the impressive aspects of the agreement is that the five permanent members of the UN Security Council and Germany (P5+1) were able to maintain a united front, despite their various political differences. To ensure this unity, they insisted the talks should have a narrow focus on non-proliferation issues, rather than bringing in the wider issues of Iran’s regional role.

But the regional powers see them as a larger political game-changer, in a part of the world where the security architecture depends overwhelmingly on the US, and has been predicated on the US’ containment of Iran for longer than most people’s lifetimes.

The US’ key allies in Riyadh, Abu Dhabi and Cairo perceive a nuclear deal as a first step to normalising Iran’s role in the region. This may be a mirage: the desire to prevent proliferation is hardly a basis for a warm friendship.

But it comes at a time when the Gulf countries do not trust the judgement of the US, thinking it handed over Iraq to Iran and Egypt to the Muslim Brotherhood, and suspecting a desire to accommodate Iran is behind the reluctance of the US to intervene in Syria.

In the most benign scenario, there is potential to build on the nuclear deal with Iran to transform the country’s international relations, making it better integrated into the region and the world. Ultimately a less threatened Iran could be less domestically repressive too. Different forces within Iran will now be calculating what options they have to lead their country down very different future trajectories.

But the vision of a historic transformation may be too good to be true. In the utter absence of a diplomatic process to deal with the regional disputes, they are playing out through proxy wars. This is what is happening in Yemen and Syria, where fighting could now intensify still further; Lebanon and Iraq could easily be next.

There is a risk, too, of renewed conflict between Israel and Iran’s Lebanese ally Hezbollah. Regional conflict could even spread into the Gulf itself, as tensions between the states could be increasingly amplified by non-state actors that are beyond any state’s control: Islamic State of Iraq and the Levant (ISIL) uses anti-Iranian narratives as a core element of its recruiting strategy, while Shia militias in Iraq and Syria are proliferating far beyond those backed by Iran.

The relations between Iran and the Gulf Arab states have not always been so bad. During the former Iranian President Mohammad Khatami’s rule, from 1997 to 2005, there was a rapprochement. The head of Iran’s national security council was awarded with Saudi Arabia’s highest honour in 2004. But this all fell apart with the reassertion of more hardline forces in Iran, the election of Mahmoud Ahmadinejad, and the struggle for power in post-2003 Iraq.

The idea that the region is simply caught up in age old sectarian hatreds is convenient for the Western powers, as it leaves out the role of their interventions in contributing to tensions. But it is a vast oversimplification. The reality is much more complex, as shifting geopolitics – like the fallout following regime change in Iraq, the post-Arab Spring power vacuums, and the perception that the US’ security commitment to the Gulf is changing – tap into a seam of identity politics.

Gulf security could be reconceptualised as a global public good that has a corresponding multilateral responsibility.

The world needs a parallel diplomatic track involving Iran and the Gulf Cooperation Council (GCC) states, to address their differences over regional politics. This is the missing link in the Iran deal, and the P5+1 need to push for this final piece to be put in place. Such a process could be mediated by northern European or Nordic countries, which have less historical baggage in the region, in partnership with non-aligned rising powers like South Africa or Brazil.

Talks could start with Gulf security, where there is a common interest in the free flow of oil and goods, despite differences over who should provide security: Iran calls for a regional security architecture, but key Gulf states take the view that Iran, as the largest country, would inevitably dominate this, and so would prefer to stick with the US as policeman. In the long term, Gulf security could be reconceptualised as a global public good that has a corresponding multilateral responsibility. A multilateral role would lessen the asymmetry inherent in a purely local framework.

There can be no illusions that talking would solve all the issues soon. But at a minimum, the world needs a detente between Iran and Saudi Arabia, or the various conflicts afflicting the region are only likely to get worse following the historic international nuclear deal.

Jane Kinninmont is Senior Research Fellow on the Middle East and North Africa Programme at Chatham House. She is the author of a new paper, Iran and the GCC: Unnecessary Insecurity 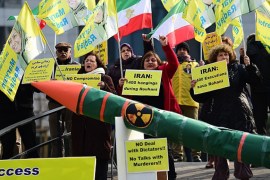