When General Allen, US presidential special envoy to the coalition against the Islamic State of Iraq and the Levant (ISIL), came to Doha just a day after the Paris Summit, he had one message to deliver to US allies in the Gulf: The campaign against ISIL is a success.

Faced with recent ISIL advances in Ramadi and Palmyra, the US is on the defensive against allegations that the campaign against ISIL lacks political will, discernment and resolve. Most importantly, the US has to show its partners in Doha and Riyadh that the strategy against ISIL does not rely on US air power alone in supporting mainly Shia militias on the ground. It also involves the enfranchisement and empowerment of Sunni communities.

In a speech delivered at the US-Islamic World Forum in Doha, General Allen asserted that the long-term struggle against ISIL must involve Iraqi communities. While the US will continue to provide the strategic umbrella for the campaign, the main thrust on the ground against the jihadists has to come from local proxies, he argued.

Allen maintained that it is essential that Sunni areas are liberated by Sunni popular mobilisation forces – and not overrun by Shia militias whose relations with local communities are characterised by mistrust, fear, and animosity.

These remarks came a day after regional coalition partners in Paris lobbied the US for a more proactive engagement of Sunni tribes and communities. In an effort to maintain the integrity of the “Coalition of the 60”, the US needs to deliver on their rhetoric.

So far the coalition has failed to do so. The recent pledge of allegiance to the “Islamic State” by influential tribal leaders in Anbar province underlines the fact that left without a viable prospect for enfranchisement, Sunnis will turn their back on the coalition and its Shia proxies on the ground.

The experience of Afghanistan provides useful lessons for the counter-ISIL scenario. The so-called Afghan Model refers to the 2001 employment of indigenous Afghan tribes as force multipliers for US Special Forces and airpower against the semi-conventionally fighting forces of the Taliban regime.

The key to the initial success of the Northern Alliance against the Taliban regime in 2001 was first due to the high motivation of Afghan tribes to finally oust Mullah Omar and his followers from Kabul; and second, the tribes’ operational skill of warfare. Strategically, the Northern Alliance saw the US as a partner with shared objectives.

Operationally, embedded Special Forces were able to maintain direct lines of communications between tribesmen on the ground and US airpower. The US had effectively created a hybrid fighting power, whereby precision air strikes would cause the Taliban to disperse while the Northern Alliance could mount concentrated attacks against smaller pockets of dispersed Taliban resistance.

To apply this scenario in Iraq, Washington and Baghdad need to provide disenfranchised Sunni communities with a viable strategic alternative to ISIL and the Shia-dominated system put in place by former Prime Minister Nouri al-Maliki.

Like in Afghanistan, it is important to provide Sunnis with a motivational cause. Only when Sunni communities feel that resistance against ISIL can lead to sociopolitical enfranchisement and de-marginalisation, will they rise up against a monster many have come to terms with out of sheer desperation.

On the strategic level, a move towards sociopolitical decentralisation empowering provincial capitals can be the most powerful counter-narrative to ISIL.

Operationally, Sunni volunteers need to be merged by embedded Western commandos into a coherent fighting force – a force that can engage ISIL on the ground while simultaneously winning over the hearts and minds of liberated communities.

This new Sunni proxy could act as a credible force multiplier providing the coalition with intelligence for its precision-strike capability. As a consequence, ISIL’s hybrid tactics of constantly dispersing and concentrating would be undermined.

The coalition’s control of the air will make it difficult for ISIL to mount concentrated attacks without being targeted from the air. At the same time, dispersion would expose the jihadists to the concentrated punch of a capable Sunni proxy. The simultaneous loss of popular support would deprive ISIL of its centre of gravity, particularly on the fringes of its territory.

Certainly, such a strategy would not be without risk. Tribes might abandon their master to pursue their own agenda, arms and money could escalate levels of violence, Iran and its proxies in Baghdad might see it as a major threat. Nonetheless, cosmetic solutions will only cause Iraq to further swirl down the spiral of death.

So far, risk aversion particularly in the West, has not only left local communities exposed to powerful transnational forces but has also obstructed constructive efforts by allies in the Gulf to take matters in their own hands.

Finally, the situation in Iraq must not be divorced from the ongoing civil war in Syria where the coalition continues to struggle to agree on a common strategic endgame.

Like in Iraq, the opposition currently trapped between ISIL and the regime, needs a realistic prospect of sociopolitical empowerment as well as direct military support to retake those territories lost to ISIL.

Andreas Krieg is an assistant professor at the defence studies department of King’s College London and a strategic risk consultant working for governmental and commercial clients in the Middle East. He co-founded the Near East Centre for Security and Strategy (NECSS) and currently works with the Qatari Armed Forces in Doha. 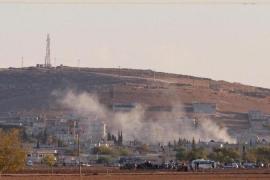