South Sudan has been engaged in a civil war for 18 months now, with both sides using children to help fight their battles. As bad as it is for the world’s newest country to descend into civil war, it’s even worse to fight that war with children.

In recent months, I’ve interviewed about 20 boys who have escaped from Matthew “Pul” Pulyang, a government commander and strongman who has been forcing boys to join his forces. His fighters have raided villages, threatened, beaten, and taken boys as young as 13 to Pul’s training camp and forced them into battle.

“I was conscripted, put into a cattle corral, held there and [then] we were taken to the training camp, there were three cars of us [boys] … we were taught to stand still for some hours – if you faint you get beaten,” one boy described to me.

Accounts indicate hundreds of boys remain in the government’s forces, which have left burned villages in their wake as the conflict rages. Opposition forces have committed similar war crimes during this conflict, killing civilians because of their ethnicity and ransacking and torching villages.

Use and recruitment of children under 18 is illegal under South Sudanese law, but is nevertheless common practise. Pul is only one of many commanders, on both sides, who have child soldiers in their ranks. The practise was also common before the current conflict began, including by Pul’s old militia.

Impunity is so firmly entrenched that commanders like Pul see no downside to making children fight. Child recruiters are never punished and sometimes in effect rewarded with army or government jobs, legitimacy and more power.

The UN and its member states have spent decades supporting the release of child soldiers from various armed groups in what is now South Sudan, and have supported the creation of the government’s national Disarmament, Demobilisation and Reintegration Commission (DDRC), which has been in charge of formally releasing children for years.

UNICEF is funding the reintegration of 1,755 boys who fought for another warlord, David Yau Yau, who last year signed a peace deal with the government that got him a top government job.

Yau Yau used children in 2010 when he rebelled against the government for the first time. Accountability is such an unlikely prospect that Yau Yau estimated the number of children in his militia at twice those the DDRC found and released from his barracks.

But because there’s been so little emphasis on accountability, child soldiers are seen as an acceptable feature of wartime, and release a part of peacetime. When commanders like Yau Yau or Pul are ready, when they no longer need the children, they hand them over and the UN picks up the tab, no questions asked.

Government officials who gave each of Yau Yau’s soldiers, including the children, 700 South Sudanese pounds ($17) as a gift, only reinforced the benefits and acceptability of child soldiering – and drew more children into the ranks ahead of release ceremonies.

The process of formal release can also be problematically slow. Yau Yau’s child soldiers were only released this year, some as late as March, even though the peace deal was signed a year ago. Boys were told by their commanders they were not allowed to leave barracks until they “got DDR” – formal release – as one put it to me.

Like Yau Yau, Pul had rebelled against newly independent South Sudan until his group signed an amnesty deal with the government in 2013. Were it not for the outbreak of the current conflict in December 2013, some 200 children in his old militia should have been released by the DDRC.

But with Pul taking up arms again on the government’s side, the DDRC missed its chance. It doesn’t know where those children are now; most probably they are still fighting for Pul and the government, together with hundreds of other children.

The UN needs to do more to get children out of the South Sudan conflict. The Security Council should go ahead with a threatened arms embargo on both sides and, now they can urgently put sanctions like travel bans and asset freezes on the worst recruiters of child soldiers.

The UN and its member states involved in South Sudan should take steps to establish a credible justice process, such as a hybrid court, to investigate and try some of the men who have used large numbers of children, or pass a UN Security Council resolution that would empower the International Criminal Court to do so. They shouldn’t wait for a peace deal. South Sudan’s children shouldn’t be fighting its civil war. 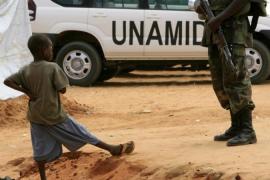