The use of unmanned US drones in Afghanistan has stepped up since January. With the launch of the new US counterterrorism mission, Freedom Sentinel, the ongoing and intensifying drone campaign has reportedly killed around 400 people in Afghanistan over the last six months.

But insurgents are not the only ones being killed.

Beyond the civilian casualties caused by these strikes, drones also fuel terrorism, increase anti-government sentiment and, as a result, increase recruitment opportunities for the armed opposition in Afghanistan.

Afghan President Ashraf Ghani’s government must take seriously the issue of civilian casualties from US drone strikes and put an end to the extrajudicial killings of Afghans by the unmanned machines of our so called “strategic partner”.

Over the past decade, US drone missions in Afghanistan were unilateral. Unlike Pakistan, the use of drones lacked the agreement of the country’s leadership. The large number of civilian casualties in drone and air strikes caused increasing tensions between Hamid Karzai, the former Afghan president, and US officials.

So why has Afghanistan become the most heavily drone-bombed country in the world? What is the legal justification for the US’ drone mission in Afghanistan when there is no mention of drones in its Bilateral Security Agreement (BSA) with the US?

Since the establishment of the Afghan national unity government in Afghanistan, Ghani’s government has given “American commanders a freer hand on night raids and air strikes”, according to a recent New York Times report.

Recent attacks show that drone operators are now authorised by “eased” counterterrorism guidelines, which permit them to hit a target even without having “the knowledge of the identities of the individuals marked for death“.

Despite the US administration’s repeated announcements of the end of its combat mission, US forces in Afghanistan now have “a more aggressive range of military operations” – mostly drone missions and special operations.

Focused in the south and east of the country, US drones are hitting Afghanistan frequently, at a rate of one to several attacks every week. Nangarhar, Paktia, Paktika, Kunar, Nuristan, Khost, Farah, Helmand, and Logar are all provinces that have been targeted by US drone operations.

According to international and national media reports and the Bureau of Investigative Journalism, civilian casualties are involved in most of these incidents, but these go without any acknowledgement from the current Afghan government.

Some Afghan TV channels report misleading and misinforming stories on the “effectiveness” and the “role” of drones in Afghanistan. Early this month, according to Afghan MPs and media reports, a US drone strike in the Alisher district of Khost province southeast of Afghanistan, killed more than a dozen civilians, reportedly “members of two families”.

On the condition of anonymity, a government official in Khost confirmed the killings to Pajhwok, an Afghan news agency.

The media office for foreign troops in Kabul also confirmed the attack with a routine addition that “reports about civilian casualties were being investigated”.

As the Afghan national unity government continues to keep silent and neglects to send any delegation to investigate the incident, Afghan MPs and the former Afghan president have “strongly condemned” the strike in Khost.

It is time to end the secrecy on the matter. The Afghan government should conduct its own investigation and assessment of each drone incident.

Now, as the US “war on terror” in Afghanistan increasingly becomes an open-ended conflict, reports suggest that the US will “maintain an aerial capacity beyond 2017 … to conduct air strikes”.

It is imperative that Ghani’s government shows ownership and acts fully in accordance with the national interests of the country by reconsidering its stance vis-a-vis the US drone war in Afghanistan.

As soon as possible, the Afghan national security council must examine all the drone incidents from the past six months and make its investigation public. Afghans have the right to know how many of their country’s men, women, and children die in these drone strikes. Their government should bring this clarity to them. Additionally, the government should reach out to the families of victims and provide them with compensation.

As Ann Wright, the former American deputy ambassador in Afghanistan, put it, drone killings, “because of the number of civilian casualties”, are “jeopardising US national security and creating large numbers of people who despise the United States“.

The US administration and the Afghan government should take the advice of former US and NATO forces commander in Afghanistan, General Stanley McChrystal, who once rightly said: “For every innocent person you kill, you create 10 new enemies.” 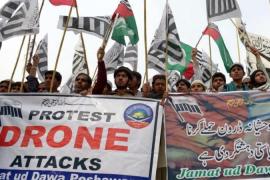 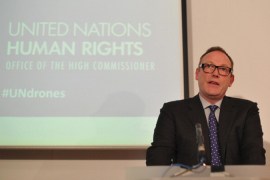 UN report says civilian deaths in 2013 increase in two nations, but no evidence of any similar casualty in Pakistan.