Beginning June 23, all of the main state bodies in Afghanistan will lose their constitutional basis. The Afghan Parliament’s term will end on June 22 with no new parliament in line to replace it due to the government’s failure to hold elections this past April. The executive branch, led by the national unity government, also lacks a constitutional mandate, as the new government was the product of a political deal rather than a formal electoral process.

The Supreme Court, the attorney general’s office, and the Constitutional Oversight Commission are all currently run by acting heads. A constitutional crisis is quickly descending upon the country as it faces an immense security challenge in the Taliban’s nationwide “spring offensive”. On top of this already shaky foundation, the country’s debilitating economic stagnation can only further aggravate its constitutional, political, and security crises.

Moreover, Afghanistan’s external relations are moving from consensus to polarisation as Iran, Russia, India, Central Asian nations, and even China find Kabul to be an unstable and unreliable partner.

The US is relaxed, no longer having to deal with an enraged Hamid Karzai, who was deliberate and calculated, while the UK, Saudi Arabia, and Pakistan are celebrating the political success of their favourite in Kabul, Ashraf Ghani.

Meanwhile, the country’s Chief Executive Officer Abdullah Abdullah seems to be content with the pomp and showmanship of his office.

The collapse of Afghanistan’s political order, compounded by an array of economic, environmental, and security challenges, has become a growing fear for many in the country. The current instability stems from closed-door political dealings among the Afghan elite and external actors with no consideration for the will of the Afghan people. Former President Karzai skillfully manipulated the Afghan electoral process, and the 2014 presidential election consequently became a contest between a democratic mandate and ethnic entitlement and favouritism.

Despite the Afghan people’s massive and courageous participation, ethnic entitlement prevailed, supported by the geostrategic objectives of Pakistan, the Arab Gulf states, the UK, and the US. Ghani was the beneficiary of this scenario.

Although UK and US interests are not exactly in line with each other, the UK seems to have become the regional expert when it comes to Afghanistan. From the British perspective, there are a number of factors at play in the larger Afghan conflict. These include Pakistan’s shrinking presence in Afghanistan, the Taliban’s exclusion from power, and the unsettling of the power balance between ethnic and tribal groups.

Acting on this assessment, the pro-Pakistan Ghilzai Pashtuns are seen as the tribe that could possibly stabilise the country. They are proponents of open dialogue with both Pakistani officials and the Taliban leadership within Afghanistan. This perception as a stabilising force within a chaotic country has prompted London’s overwhelming support for Ghani, a Ghilzai Pashtun. Karzai was a Durrani Pashtun.

Preventing the unravelling of Afghanistan’s political order can only begin by recognising the serious shortcomings in Ghani’s character, policy choices, political skills, and the ever-growing isolation of his CEO Abdullah.

Ghani operates along clearly ethno-tribal lines and his original failure to win a democratic mandate looks even worse in the face of his other errors: his naive rapprochement with Pakistan, his selective approach to fighting corruption, and his growing feud with Karzai and former mujahideen leaders. It’s as if he views the country as his own personal fiefdom.

Regardless, the country’s problems remain; Afghanistan is crippled by poverty, weak state institutions, and the trauma of near constant war, as well as an ideologically driven terror movement that thrives off of the drug mafia and entrenched nationwide corruption. Such extensive and complex challenges cannot simply be addressed by a single person or through “quick fixes”.

Moving forward, Ghani’s primary task must be to repent for his original sin by initiating serious and substantive electoral reforms and engaging in a truly inclusive political process, particularly among the communities that don’t support him.

In his foreign policy choices, Ghani must recognise the danger of regional polarisation and Pakistan’s entrenched geostrategic objectives, resilience, and prowess.

Rapprochement with Pakistan will mark the end of a long process of critical and structured dialogue between the two countries that sought to overcome Afghanistan’s structural weaknesses while containing Pakistan’s expansionist and opportunistic objectives.

An alternative to the imminent government collapse must be aggressively pursued by all those with a stake in a stable Afghanistan. Fortunately, plenty of allies and assets remain rallied behind the goal of solidifying and protecting political stability within Afghanistan. The Afghan people themselves overwhelmingly support the post-Taliban political order, despite their profound grievances with the current government.

The Afghan National Security Forces have proven to be resilient, efficient, and competent – even while facing formidable challenges. Elements of the Afghan state machinery and political space, such as its media and civil society, have reached noticeable maturity. There are sufficient regional and global stakes in a politically and economically viable Afghanistan, and these supporters will not allow the collapse or dissolution of order in Kabul.

The preferable way to prevent a regime collapse in Afghanistan is to change the regime’s behaviour; if not, then to change the regime itself. An interim government is the lesser evil compared to the collapse of the current government’s entire system. Replacing top governmental leadership must happen in a way similar to how leadership is changed among corporate stakeholders, rather than the chaotic upheaval brought about by revolutionary changes.

Unfortunately, as with the current leadership and state bodies, a potential interim government would not have any constitutional basis. But it would be less despised, isolated, and divisive than the current regime. Tasked with a single assignment, it would work to return the country to a legitimate and constitutional path by holding a nationwide election.

The refusal of Afghanistan’s elites to submit to democratic politics and the refusal of external powers to respect Afghanistan’s sovereignty both cause and fuel the Afghan conflict. Only after addressing these challenges will we begin to see the light at the end of the tunnel. 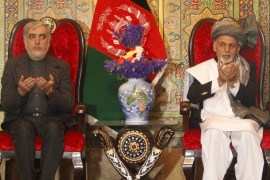 Afghans need reassurance that the gains of the past 14 years won’t be negotiated away as part of regional deal-making. 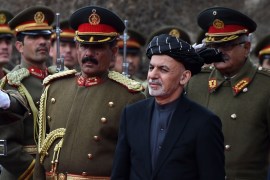 What remains unrecognised is the West’s complicity in denying Afghan democratic aspirations.