“I fast to empathise with the poor,” is a common refrain among Muslim Americans during Ramadan.  However, nearly half of the 8 million Muslims living in the United States are poor, or dangerously close it.

The Pew Research Group holds that 45 percent of Muslim Americans have a household income of less than $30,000 per year; a figure that closely corresponds with the legal poverty line.

Fasting during Ramadan is one of five central Islamic obligations. It commemorates the revelation of the Quran – Islam’s holy book – to the Prophet Muhammad. Its historical significance is almost matched by its philanthropic spirit, which emphasises charity and empathy for the poor.

This mission, routinely echoed by Muslim Americans and prominent Muslim organisations, projects an image of a middle class, upwardly mobile demographic. Juxtaposed with today’s damaging stereotypes of Muslim Americans is one that envisions the population as a socioeconomic “model minority”. This stereotype is overshadowed by more prominent caricatures linking Muslims to terrorism, and more alarmingly today, ISIL.

However, for the 45 percent of Muslim Americans living below, at, or just above the poverty line, it is just as damaging. Especially during Ramadan.

Anything but a monolith

Muslim America is anything but a monolith. While discursively stereotyped as an Arab and immigrant, Muslim America is richly diverse. In fact, enslaved Africans in the Antebellum South were the first Muslims to observe Ramadan in the United States.

Today, the population is segregated along racial lines, and indeed perhaps, just as divided socioeconomically. The depths of these rifts are never more vivid than during Ramadan.

The dinner tables of middle class and affluent Muslims overflow with a rich mosaic of food and drink. However, for less fortunate Muslim Americans, Ramadan is generally an extension of the of rest the year – short of the rich dishes and excess wealthier Muslim families enjoy.

For poor Muslim Americans, Ramadan places a spotlight on their circumstance, intensifying the stigma, perils and pain of poverty. Although almsgiving spikes during the holy month, statistics indicate that Muslim Americans are far more likely to donate to poor Muslims in foreign countries than they are to poor Muslims at home. Therefore, curbing Ramadan’s philanthropic impact on needy Muslims stateside.

Mosques, which are generally segregated along racial, sectarian, and socioeconomic lines, tend to allocate their resources within their surrounding communities or send them abroad. Consequently, poverty within Muslim America remains largely unaddressed, unchanged, and hidden from popular view and formal discourses.

Yet, a stroll through sections of Detroit or New York, Minneapolis or Philadelphia offers vivid panoramas of Muslim American indigence and working class life.

Many families in these, and less concentrated Muslim American spaces, experience the common trappings and trials of poverty. For instance, 82 percent of the estimated 80,000 Somalis living in Minnesota are “near or below the poverty line”.

Iraqi households, centred largely in Dearborn and Detroit, Michigan, had an average household income of $32,075 per year. A considerable segment of these populations are Shia Muslim refugees, pushed into the US in waves in the 1990s and after the 2003 war.

The median income of the Yemeni population – most concentrated in New York, Detroit, and Oakland, California – hovers close to the legal poverty line, standing at $34,667 per annum.

Furthermore, the Asian American Federation found that “53.9 percent of Bangladeshis living in Brooklyn are poor – the highest rate among the city’s eight largest Asian immigrant groups”.

For these Muslim communities, fasting is not an opportunity to “empathise with the poor”, but a routine and reoccurring reality. They are “the poor”, and the empathy Ramadan is intended to engender has not improved that reality.

For middle class and affluent Muslim Americans, breaking fast atop tables of excess, let action – instead of empathy – for the poor motivate their fast this Ramadan. 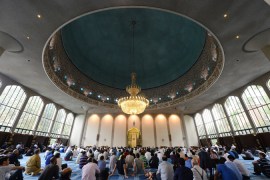 In the hype of the post-Woolwich media blitz can Muslims in the United Kingdom expect a fair deal? 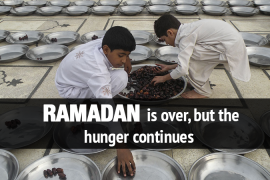 Ramadan is over, but the hunger continues

Undernourishment levels have fallen in the past decade, but hunger in the Muslim world remains a major problem. 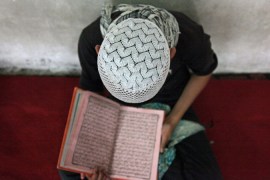 Is Ramadan becoming a business?

We discuss whether the spirit of Ramadan has been lost in excessive consumption and commercialism.