These were the reported words of Dylann Roof. The 21-year-old white male sat, for an entire hour, at the Emanuel AME Church in Charleston, South Carolina, a strange visitor to a Bible study meeting. Then he stood up, and he said those words, and he fired a semiautomatic handgun, again and again.

These words are not the rantings of an isolated lunatic. They are saturated in American history. They represent a racial fear that stretches deep into our collective past, and they inform our current political crisis.

Yet throughout southern history, it was much more common for white men to sexually exploit black women. The cry of rape was a distracting puff of smoke – the real problem was that African Americans were challenging white supremacy, an anxiety that still filters into our modern political conversations.

The AME church in Charleston illuminates the history of both black struggles for freedom and white resistance. Whites monitored the church upon its establishment in 1816, fearing that the independent black space would erode the system of slavery. After one of its founders, Denmark Vesey, tried to orchestrate a mass slave uprising in 1822, the church was burned to the ground, and blacks were forbidden from worshipping without whites present.

In the 20th century, AME Emanuel Church was a centre for Charleston’s civil rights movement, hosting mass meetings and speakers such as Martin Luther King. Yet, as African Americans fought for basic citizenship, segregationists moaned that their own rights were being stolen – a language echoed today not only in the words of Dylann Roof, but also in the hyperventilating vitriol that labels US President Barack Obama an America-hating, Kenya-born socialist.

As Roof himself illustrates, when it comes to race in America, the past and the present are intertwined. A widely circulated photograph shows him wearing a jacket bearing the flags of Rhodesia and apartheid-era South Africa. Another photograph shows him sitting on his car, with a license plate that features three versions of the Confederate flag. All those flags represent white supremacist regimes.

Now some people insist that the Confederate battle flag signifies “heritage not hate”, but in the 1960s, white segregationists consistently protested against civil rights demonstrations by brandishing those flags. South Carolina started flying the stars-and-bars above its state house in 1962, in direct defiance of black activism. Today, while the US and South Carolina flags are at half-mast, the Confederate flag still flies high at a nearby memorial.

Most Americans are not ultra-right-wing white supremacists, and a flag did not shoot nine innocent people during a Bible study meeting. But Dylann Roof is one omen of a very real, very deep problem: Too many white Americans want to believe that we have expunged racism from our society, when in fact it shapes our politics, our cities, our institutions, our culture.

In the immediate aftermath of the tragedy, Charles Cotton of the National Rifle Association proclaimed that the victims would be alive if the law allowed them to carry handguns in church.

Commentators on Fox News speculated that the murders were motivated by hatred for Christianity, rather than by race hatred, despite the killer’s own words to the contrary. None of the candidates for the Republican nomination for the presidency can seem to mention that the killings are about race.

Imagine if the victims were white, and Dylann Roof was black. Would we sanction such insults to the dead? Would we call Roof a terrorist? A thug?

If we are to reckon with race, we need to sincerely reckon with those words. We cannot take our medicine until we admit that we have the disease.

Aram Goudsouzian is chair of the Department of History at the University of Memphis and author of “Down to the Crossroads: Civil Rights, Black Power, and the Meredith March Against Fear”. 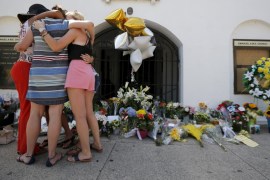