Two years ago this week, a police crackdown against a few hundred demonstrators hoping to save Istanbul’s Gezi Park sparked massive protests across Turkey and a two-week citizen occupation of the grassy square. In the end it was about a great deal more than protecting a small wedge of green: it marked a surprising embrace of Turkey’s often nettlesome diversity; a new generation finding its political voice; and the release of pent-up frustration with an increasingly invasive and over-bearing government run by then-Prime Minister Recep Tayyip Erdogan’s Justice and Development Party (AKP).

The government, realising it had poked a sleeping giant, beefed up police presence in the streets. By mid-June the battle had tilted in Erdogan’s favour. In the two years since, the AKP has enacted harsh security laws that enable the police to use live ammunition on protesters and detain citizens without charge. It’s allowed for the blockage of websites without court order and muzzled hundreds of critical voices with lawsuits, jail time, and charges of terrorist propaganda.

In speech after speech, Erdogan divides the populace into those who support the country’s progress, aka the AKP and its New Turkey, and those who seek to overthrow the state, meaning the capulcu, or Gezi thugs. It’s apparently worked.

Now, as Turkey faces its most significant elections in more than half a century, the battle may be tilting back.

In 2011, the AKP took about half the vote (49.8 percent) and claimed a democratically reasonable 327 seats. Through seven elections and two referenda, the AKP has never lost. It is expected to win again on June 7.

Local elections and the presidential vote, however important, have a limited impact on national government. Sunday’s parliamentary vote will thus mark the AKP’s most meaningful test since the Gezi protests; since a vast corruption scandal tarred a handful of top officials; since its mud-slinging divorce from the followers of US-based imam Fethullah Gulen, and the subsequent purges of the police and judiciary; since the economy slowed to a crawl; and finally since Erdogan moved into a 1,000-room palace and began to harp on the need to alter the constitution and institute a presidential system that would place still greater power in his hands. (Under Turkey’s current constitution, the prime minister is the most powerful position, while the presidency is ostensibly largely ceremonial.)

If the AKP gains a super-majority of 367 seats, it could alter the constitution on its own; with 330 seats, it could float a referendum on the issue. A recent poll by Aristirma predicted the AKP would get about 42 percent of the vote on Sunday, the CHP 26 percent, the Nationalist Action Party (MHP) 16 percent and the People’s Democratic Party (HDP) nearly 11 percent.

This seems a decent total for the AKP, but Turkey’s parliamentary math is fickle. By one calculation this tally would give the AKP 266 seats and force it to cobble together its first coalition government. This would mean significantly diminished power for the party.

That result would also cement the emergence of the three-year-old HDP. Formed by a collection of independent candidates who won 36 parliamentary seats in 2011, the party is associated with Turkey’s Kurds, a minority that represents about 18-20 percent of the country’s population of 76 million.

Erdogan likes to link the HDP to the Kurdistan Workers’ Party (PKK), which fought a separatist war against Ankara in the 1980s and 1990s and has been designated a terrorist organisation by the United States – and which is currently engaged in peace talks with the government.

Most Turks see the HDP as a pro-Kurdish party. But to a foreign observer, it looks like the anti-AKP. It’s progressive and anti-capitalist, embracing environmentalism and seeking to end discrimination.

In a nod to the republic’s purportedly secular nature, its election platform calls for the elimination of the government’s religious affairs directorate, which has been vastly expanded under Erdogan.

Nearly half the HDP’s candidates are women, and one, Baris Sulu, is the first-ever openly gay politician to run for Turkey’s parliament. HDP candidates also include socialists, conservative Muslims, Alevis, Armenians, Azerbaijanis, and Laz. It’s the Benetton ad of Turkish political parties.

As such, it has a fitting figurehead. Since garnering an impressive 9.8 percent of the vote in the presidential election, HDP co-president Selahattin Demirtas has emerged as Turkey’s second most popular politician. At 42, he’s handsome and clean-shaven – a charismatic family man.

While the AKP keeps a famously straight face, Demirtas will use humour to make his point. He recently spoke of the president’s campaign-season proclivity for showing up at all kinds of openings and inaugurations.

“If you tell Erdogan a soda bottle will be opened,” Demirtas told reporters, “he would come for sure”.

Before going into politics he served as a human rights lawyer. And just to test the bounds of Turkey’s tolerance, he’s Kurdish.

Add it all up and you’ve got what one analyst recently called “the most difficult election to read since the ruling AKP came to power”. Putting too much stock in pre-election polls is a fool’s game. Lean a few points in the other direction and the HDP fails to cross the election threshold.

The AKP, picking up most of the HDP’s 50-60 lost seats, cements its one-party rule and likely proposes a referendum for a US- or French-style presidential system. But if Demirtas and his HDP cross the 10 percent threshold, as most polls predict, they would effectively block Erdogan and the AKP from instituting a presidential system and potentially endangering Turkish democracy.

This explains why many liberal Turks, who tend to vote CHP, have been telling reporters that they plan to vote HDP. Many observers predict a return of street violence should the HDP fall short, particularly in the country’s Kurd-heavy southeast. Others worry that the AKP might try to bend the vote in its favour. Thankfully, the 50,000-strong army of election monitors from Oy ve Otesi, an NGO that is perhaps the most substantial product of the Gezi protests, aims to ensure the accuracy of the final tally.

On the Gezi anniversary earlier this week, the AKP government essentially put central Istanbul on lockdown, shutting down streets and public transport and dispatching waves of riot police. Still, a few hundred people gathered on Istiklal Caddesi (Independence Avenue) to remember those who died as a result of the Gezi protests.

Ankara’s increased vigilance means there’s pretty much zero chance of another national protest movement emerging. But if the folks who led the Gezi protests had a laboratory in which they could concoct their ideal political candidate, they may have produced Demirtas – who like them represents an emerging political generation, an embrace of diversity, and distaste for the way the government wields power. And now he might just give the capulcular what they were denied in 2013: a weakened Erdogan.

It’s a bit of an over-simplification of reality, but there would be a certain symmetry in the polished, 21st century candidate from the nascent progressive party foiling the ultimate power-grab of the blinkered populist strongman. Not a passing of the torch, exactly; but perhaps the start of a changing of the guard. 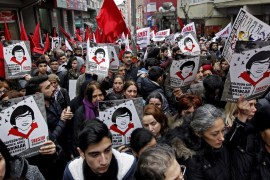 Istanbul hostage incident highlights the enduring impact of the Gezi protests and the polarisation of Turkish society.