Some years back, Wanderlust magazine published a list of 20 “astonishing” complaints made by British holiday-makers to travel agents following excursions abroad.

These included: “The beach was too sandy,” and “On my holiday to Goa in India, I was disgusted to find that almost every restaurant served curry.” Another traveller complained: “It took us nine hours to fly home from Jamaica to England [but] it only took the Americans three hours to get home.”

A recent article in the Daily Mail Online details the tribulations of vacationers on the Greek island of Kos, where thousands of refugees and other “straggly migrants” have compromised the aesthetics of the landscape with no regard for the needs of Brits on package tours.

Penned by Hannah Roberts, the article’s byline has since been revised to “Mail Online reporter”. A note appended at the end of the piece specifies that “the original headline and opening paragraph to this article made reference to Kos as a ‘hellhole'” and that “both have now been amended”.

Not amended, however, is the description of how a couple from Manchester has seen their summer break “turned into a nightmare as penniless migrants who are in Greece to claim asylum sit outside their restaurant and watch them eat”.

Ditto for photo captions like: “Out of place: A man in a suit and his smartly dressed companion walk past a family of migrants drying their clothes on the railing by the seafront.”

So much for political correctness; from the Daily Mail’s perspective, we’re apparently not required to so much as feign belief in the equality of human beings.

In response to the article, journalist Ellie Mae O’Hagan quipped on Twitter: “This piece will be studied by future anthropologists wishing to understand the primitive mindset of their ancestors.”

Of course, it also provides plenty of fodder for contemporary study. The Washington Post’s Adam Taylor, for example, recently speculated:

“…[P]erhaps the real reason that the Daily Mail article has riled up so many is because many suspect it speaks for the silent majority in Britain: The British government was one of the first to disavow saving migrants in the Mediterranean, warning that search-and-rescue missions would create a ‘pull factor’ for migrants, even if it meant many could die.”

The dehumanising discourse deployed against migrants naturally helps render their lives expendable. But beyond gaping at the level of boorishness exhibited by our anthropological subjects in Kos, it’s imperative to pinpoint the role of the United Kingdom – and its imperial sidekicks – in helping to generate the migrant crisis in the first place.

For starters, the Daily Mail specifies that asylum seekers whose existence is creating an “eyesore” on the island hail primarily from “war-torn Afghanistan and Syria”. Britain’s contributions to Afghanistan’s war-torn status should be obvious to anyone who has followed recent history.

For its Syrian-related machinations, we might peruse Dr Nafeez Ahmed’s discussion of the “integral role of covert US and British regional military intelligence strategy in empowering and even directly sponsoring the very same virulent Islamist militants” who went on to form the so-called Islamic State, one of the entities now terrorising Syria.

Economic refugees are also mass-produced on an international scale thanks in large part to policies of imperial plunder and neoliberal exploitation, which function according to the notion that a minority of countries and people should control the majority of wealth and resources at the expense of everyone else.

Given the innate human inclination towards survival, it’s no surprise that this scheme of institutionalised inequality generates waves of migration in the direction of concentrations of prosperity.

Whether fleeing war, financial misery, or both, migrants are subjected to successive stages of persecution and suffering for the crime of subjecting the world’s privileged to evidence of their existence. For a Palestinian refugee from Syria interviewed by Human Rights Watch in Kos, one of these stages involved being sprayed with pesticide by a restaurant owner.

And while British package tourists often don’t belong to the uppermost rungs of the socioeconomic hierarchy themselves and presumably suffer their own variations of structural oppression at home, at least they’re able to mitigate the pain of daily life with cheap trips to the Mediterranean that don’t entail overcrowded boats and a high risk of death.

Or at least, they were before the refugees started watching them eat.

Perhaps the UK government should issue a travel warning. 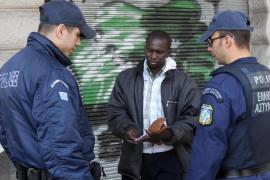 Europe can no longer portray itself as a bastion of humanitarian values if it doesn’t address the issue of migration.