On July 23, 2014, two weeks into Israel’s 51-day assault on Gaza last summer, Palestinian medics and civil forces were retrieving the crushed, charred, and mangled bodies from the rubble of Gaza City’s Shujayea neighbourhood, laid to waste three days earlier in one of the most lethal onslaughts of the war. Many of the dead were impossible to identify.

While this went on, the funeral for 26-year-old Israeli soldier Dmitry Levitas was held in the military cemetery on Mt Herzl in tranquil Jerusalem. Levitas was alleged to have been killed by sniper fire a day before.

Lieutenant Colonel Nerya Yeshurun, senior officer of Levitas’ unit, was still stationed in Gaza. But Yeshurun and his commanding officer, Mordechai Kahane, wanted to participate in the funeral in their own, very special way.

So Yeshurun took to the Israeli army’s internal communication network and spoke directly to the troops under his command:

“I want us, here, in the middle of the Shujayea neighbourhood of Gaza, to join all the people who are with Dima on his final pathway, and we will shoot a fusillade to honour and salute this officer – at the clinic from which the villains shot at him and took his life. I rely on you and am proud of you. Prepare for shooting in memory of Dima, may his soul be bundled up in the bundle of life, Amen.” (This is the English translation.)

And so with this, Yeshurun – who later told the Israeli army publication, Bayabasha (“On Land”) that he “loved Dima dearly” – ordered his troops to open fire on a medical clinic in Shujayea, the crowded neighbourhood where Israel had killed as many as 120 people just days before.

Yeshurun’s “eulogy” was transmitted in real time to his unit. The next day, a recording of it was uploaded to NRG and MAKO, two mainstream and patriotic Israeli news outlets.

The incident went virtually unnoticed by the Israeli press and international media until we reported it almost a year later for the Electronic Intifada.

The commander’s chilling words are material evidence of deliberate war crimes, including targeting a medical facility without military necessity and taking military action in revenge, both clearly prohibited by international law.

Five people were killed that afternoon in Shujayea and dozens more injured. Even Asa Kasher, a prominent Israeli military ethicist, who helped devise the army’s “code of ethics” has ruled the incident as unlawful.

It is notable, then, that the Israeli military wasn’t even slightly concerned about potential consequences for the action. Indeed, it seems clear that Yeshurun’s ceremonious shelling was something the Israeli army wanted the Israeli public to know about, as there can be little doubt that it was the army itself that released the recording to the above media outlets.

And until now, their indemnity has been upheld. A swaggering commander’s admission of a war crime elicited not even a murmur from the Israeli public or press. Indeed, only after our investigation did the Israeli media take any notice of it when – a short time after – an Israeli television station aired a broadcast on the story, garnering significant attention.

Notably, the salient response from viewers has been to simply heap scorn and vitriol on the journalist and the outlet for reporting the military’s vengeful and criminal act, but not for the act.

But on June 11, it was made public that the Military Advocate General had opened a criminal investigation into the incident based on the evidence uncovered in the reporting.

However, auguring what the results of the Israeli military’s criminal investigations will generate, the MAG simultaneously announced the closing – without charges – of several prominent criminal investigations. The most notable of these was the killing of four little boys as they played football on a Gaza City beach.

Openly declaring the crime, both as it occurred and then later presented to the Israeli public, makes it appear designed to boost the flagging morale of the Israeli army – and the nation. It’s important to recall that at that time, more Israeli soldiers had lost their lives in the assault on Gaza than at any time since 2006, when the military took a very hard beating from Hezbollah after invading Lebanon.

By that July afternoon, some 30 Israeli soldiers had been killed – losses which shocked an army that had not anticipated and were overwhelmed by the fierce and highly capable resistance they encountered.

Of course that number is dwarfed by the death toll among Palestinians: Over 2,200 Palestinian died during the 50-days of fighting, the vast majority of them civilian – many of them crushed to death in their homes.

“We didn’t come here for fun and we have an important mission that I’m very proud to see you all taking part in,” Yeshurun told his troops.

When Yeshurun trumpeted his eulogistic attack, he was performing not only for his troops – but his country: insisting upon the honour and righteousness of its soldiers was the invader’s chief concern.

This single episode is emblematic of what we already know: That the sadistic 50-day assault committed by Israel on the Palestinians last summer was intentional and premeditated – a crime in plain sight that is being systemically immunised against accountability through the army’s internal investigations, as they will delay or prevent an investigation by the International Criminal Court.

For Israel’s warriors, the wanton shelling of Palestinian civilians, their homes and hospitals, is just something to boast about back home.

Noam Rotem is an activist and writer.

A new era of sovereignty in Gaza

Resistance to Israel’s assaults on the Gaza Strip may have paved the way for Gazan sovereignty. 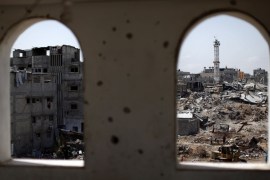