The situation in Syria is now a global crisis. The senseless acts of terrorism in Paris and Copenhagen , alongside the large numbers of refugees fleeing Syria for Europe, demonstrate that the crisis is one which Europe and the wider international community must urgently address.

The current ISIL-first, narrow approach is not working. To save lives, alleviate the refugee crisis, and bring about a peaceful transition in Syria, the most practical, feasible step is a no-fly zone (NFZ).

The root cause of the crisis in Syria is the Assad regime. It was Bashar al-Assad’s security forces who responded to the peaceful demands for freedom and democracy in 2011 with brutal repression including the killing, torture, and disappearance of protesters. It was Assad who deliberately freed known extremists from Syria’s prisons to fuel his false narrative.

Now groups such as ISIL have taken advantage of the chaos and instability to seize parts of Syria and terrorise its citizens, as seen in recent tragic events in the historical ruins at Palmyra.

Any approach towards ending the conflict therefore must begin by addressing the chaos created by the Assad regime. But this is not the current strategy of our Western partners.

While the US-led coalition’s air strikes in Syria have helped degrade ISIL’s forces, they have done nothing to stop the ongoing bombardment of Syria’s cities with barrel bombs and chemical weapons dropped from regime helicopters.

The death toll of this bloody conflict now exceeds 300,000, a great number as a direct result of these indiscriminate aerial bombings. A no-fly zone would put a stop to this.

The lack of basic protection against barrel bombs continues to be a major factor behind Syrians taking the perilous, frequently tragic journey to Europe in search of safety. A no-fly zone would offer Syrians some hope by creating safe areas which would lessen the need for Syrians to flee abroad, and allow refugees to begin returning to their homes.

Syria’s moderates need security and safety from Assad’s air strikes to build on work inside Syria to establish moderate local governance structures. Our interim government has already had successes in liberated areas such as Idlib.

However, the risks for Syrians on the ground, including brave members of civil defence teams, frequently referred to as the “White Helmets”, remain great. Their work is limited due to the regime’s freedom to bomb Syrian towns and cities at will.

Assad has already lost control of large swaths of Syria, leaving power vacuums across the country. Syria’s moderates can fill these vacuums and prevent extremists from taking root, but we need basic protection from air strikes and greater support to do so.

More than 12 million Syrians are in desperate need of aid. A no-fly zone would allow unrestricted humanitarian access to besieged areas and break the Assad regime’s use of access to aid as a weapon of war.

As in Yarmouk, the Assad regime’s brutal siege tactics have created humanitarian catastrophes, and fostered the growth of extremism across Syria.

While we at the Syrian Coalition welcomed UN Security Council resolutions that authorised cross-border humanitarian access, we know the delivery of aid has been consistently hampered by the lack of protection from regime air strikes. A no-fly zone would effectively remove these barriers and help establish humanitarian corridors, or safe areas, to facilitate desperately needed aid.

Since the start of the Syrian uprising, Assad has shown no signs of pursuing any goal other than outright victory for his brutal regime. He has falsely used political initiatives to secure military gains on the ground. Just one example is when UN Envoy Staffan de Mistura announced that Assad had agreed to a ceasefire in the city of Aleppo.

Maliciously, the regime’s air force immediately intensified its bombardment on the city. These are not actions of a credible or genuine partner in the attempts to find a political solution. They are the actions of an obstinate, vicious regime that, without a change in the dynamics on the ground, will continue to pursue military options while Syria burns.

A no-fly zone would send a clear signal by the international community to Assad – and to his masters in Tehran and Moscow – that outright military victory is not an option, and that the only means of bringing an end to this conflict is through meaningful negotiations.

We saw after the heinous chemical weapons attacks in Ghouta in August 2013 how quickly the regime will make a political deal when its survival is at stake.

Four years into this bloody war, millions of Syrians are in desperate need of a practical solution for peace. That is why the call for a no-fly zone is growing louder among voices from inside Syria, across all minorities and ethnicities, as well as within the wider international community. We all know a no-fly zone is the essential first step for a peaceful transition in Syria.

Mouaffaq Nyrabia is  EU representative for the Syrian National Coalition. 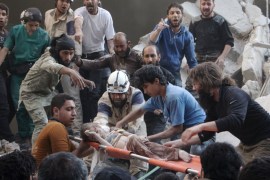