As one commentator has already noted, some appointments in Israel’s new cabinet seem to be a case of letting the fox guard the chicken coop.

When Israeli Prime Minister Benjamin Netanyahu last week announced his new government, with a wafer-thin-majority, the rightwards lunge was written all over it – and all over crucial cabinet positions in particular. So, in charge of the justice ministry, meet the settler-stalwart Jewish Home party’s Ayelet Shaked.

Actually, you may remember her from last year’s war on Gaza, when she penned a Facebook post justifying the bombing of all Palestinians civilians on the grounds that they give rise to “evil” and also raise “little snakes”. Oh and also, she sees Israel’s high court as an activist tool and has, in the past, sought ways to undermine it.

Meanwhile Jewish Home party leader, Naftali Bennett has secured the education portfolio and another of its minister is now deputy in the defence ministry, overseeing the West Bank – giving this party a serious amount of clout in the cabinet.

Obviously all this is more bad news for Palestinians in Gaza, occupied East Jerusalem and the West Bank. Neither does it bode well inside Israel’s internationally recognised borders, for Israel’s 20 percent population of Palestinian citizens – since the new government is stuffed with politicians who don’t seem to be big fans of enshrining minority rights.

And this government is also entrusted to deal with other equality and discrimination issues, such as the recent, large protests by Israel’s population of Ethiopian Jews, highlighting decades of racist and derogatory treatment.

All this comes at a period when the wider region – thanks to the death cult, the Islamic State of Iraq and the Levant (ISIL) – is racked by deadly religious persecution, and faith differences are being manipulated, inflamed and exploited to disastrous effect. That’s probably no coincidence. At a time when Israelis see nothing but trouble on their borders, the impulse seems to be for an even tighter lockdown on, and perceived safe retreat into, a narrowly defined Jewish state.

But it may go beyond that too, in what some analysts see as a sort of spread effect: the Israeli right’s slide into what seems to be an increasingly racist vision of religion-obsessed citizenship dovetailing with the rise in ISIL’s violent, cross-border movement, whose deadly, distorted, so-called religious “purity” premises its brutal slaughtering of people.

Obviously, this categorically isn’t to suggest any similarity in aims, causes or actions. But perhaps, non-deliberatively and without intent, regional events do affect each other in some way?

Paul Sedra, associate professor of history at Canada’s Simon Fraser university, says there has been an escalation in “the same sort of ethnic politics and a race to bottom in terms of ‘purity’ across the region”.

Meanwhile, Gerard Russell, author of Heirs to Forgotten Kingdoms, which focuses on minorities in the Middle East, notes: “Israel isn’t completely isolated from Arab world… There is some contagion of beliefs and ideas.”

Both these analysts and others locate the increasingly ethnic-based exclusion in the Middle East in the context of the rise of Arab (and Zionist) nationalism in the region during the 20th century – this began the demise of what, during the days of Ottoman rule across the Middle East, had been multicultural areas that embraced hybrid identities.

In the last few decades, as Arab nationalism waned and religious politics became more prevalent, the latter has become a greater factor in defining nationhood, identity, inclusion – or even the basic right to be free from persecution.

There is nothing particular to the Middle East that makes people more tribal or sectarian – but certainly instability, insecurity, invasion, political vacuums and constant, daily fear will mean that any ethnic or religious differences can be more easily exploited by those who seek to do so.

Elyse Semerdjian, associate professor of Middle East history at Whitman college in the US, points out: “Generally we are seeing a shift to the right, globally. There are people in the US calling into question whether there should be a separation between church and state.”

So that element isn’t unique to the Middle East, either – although, as Semerdjian points out, there may be different factors, such as the context of a post-Cold-War period, or a reaction against the identity-stripping homogeneity of corporate-led globalisation, affecting different situations.

One of the tragedies of the Arab uprisings was that they did not, as was hoped, open up a conversation around citizenship and the idea of a national identity premised on citizenship, rather than religion.

As Semerdjian says, there was “hope for a civic national movement” but the movement “has been really marginalised, and across the Middle East is completely demoralised”. Across the region, however, it seems clear that only this currently marginalised movement can ever hope to restore a diversity that is rapidly being dismantled. 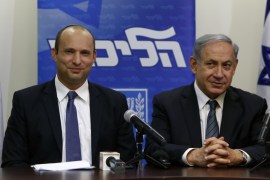 Netanyahu’s wobbly government: Will it hold? 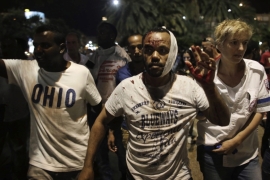