It took five excruciating years of haggling, and months of intense buildup, for the highly anticipated “fight of the century” between the world’s two leading pound-for-pound boxers to happen. It was also the highest grossing fighting match of all time, with the two protagonists collectively taking home as much as $300m in talent fees.

Heading into the twilight years of their boxing careers, both men carried immense burden on their shoulders.  Manny “Pacman” Pacquiao represented the hopes and dreams of 100 million Filipinos, who saw him as their greatest living national treasure, bringing pride and recognition to their country like no one else. The Filipino boxing legend was also supported by the broader Asian community, who saw him as the embodiment of the spirit of discipline and resilience.

Meanwhile, Floyd “Money” Mayweather was keen on maintaining his almost two-decade-long undefeated record, hoping to vanquish his ultimate rival and cement his legacy as the greatest boxer of his generation. It was a high-stakes match on a cocktail of overweening vanity, money, and bragging rights.

Cashing in on their intense rivalry and unquestionable fighting pedigrees, the two boxers managed to create enough excitement to launch the most “lucrative fight of the century”, which became a must-watch for the global elite who fought over precious tickets with stratospheric price tags.

Was it worth it?

But the match ultimately ended up as underwhelming, with Pacquiao remaining as “people’s champion”, while Mayweather was once again the “judges’ champion”.

Throughout 12 rounds of boxing, Mayweather jealously guarded his undefeated record by systematically employing his signature strategy of evading sustained exchanges with his opponent. At times, it was a boring and annoying fight, leaving many people wondering whether all the hype was justified. Some fans paid as much as $40,955 to grab a seat close to the fighting ring.

On his part, Pacquiao was left frustrated, incredulously challenging Mayweather’s unanimous decision victory. In a bizarrely adversarial post-fight interview with sports commentator Max Kellerman, who seemingly tried to convince the Filipino boxer that he was roundly defeated, Pacquiao insisted that he won the fight, and that he couldn’t land as many punches as he used to due to Mayweather’s constant evasion.

Predictably, many Filipinos were unhappy with the both the fight and the subsequent interview, lashing out at the American commentator on social media and elsewhere.

A Pacquiao fan, Cambodia’s strongman Hun Sen also joined in, refusing to pay a $5,000 bet, because “Floyd was just running around – blocking and avoiding – while Pacquiao repeatedly threw more and more punches, punching him to lie against the ropes”.

Accusing American judges of making “a unanimous decision to make a winner become a loser”, he suggested the match should have been held outside the US, possibly in China.

Bitter and incredulous about his defeat, Pacquiao has challenged his opponent to a rematch. Later on, he got into trouble by claiming his performance was compromised by a shoulder injury, and there were suggestions that he was not allowed to take necessary medication for it.

There has been a lot of confusion over whether authorities were informed of Pacquiao’s reported injury at all, raising speculation that he could face charges of perjury. He also faced lawsuits from individuals who claimed they were defrauded, because the Filipino boxer didn’t disclose his injury before the much-anticipated fight they paid to watch.

Eager to prove his mettle, and ascertain his status as the top fighter of our era, Mayweather has reportedly agreed to a rematch, possibly sometime in 2016 after Pacquiao makes full recovery from his shoulder injury. The American boxing prodigy is postponing his retirement.

For long, experts have been anticipating the decline of boxing as a popular sport. Its particularly brutal and vicious nature has convinced many that boxing is an anathema to our modern age of civility. We live in a time where gentlemen’s sports such as golf have captured the imagination of millions of people.

Sports such as tennis, soccer, and basketball have also provided us with a wide array of bigger-than-life stars, who are gifted with uber-human athleticism and celebrity-like personas. For sure, there are still many people, who prefer to watch and are deeply passionate about fighting sports.

But boxing is also being challenged by the rise of Mixed Martial Arts (MMA), which has drawn the world’s leading athletes and Olympians to an incredibly more dynamic – and even more vicious – pugilist enterprise.

Overall, the Mayweather-Pacquiao fight may represent the peak of boxing as a sport before its inevitable decline. And it is highly doubtful whether a potential rematch between the two fighters could gross as much money as the first one.

Yet, few can deny the amount of talent, fame, and excitement the two boxers have generated over the years, cementing their positions as among the leading celebrity fighters of the century. 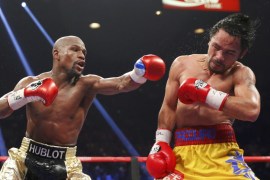 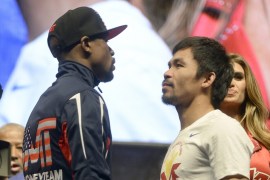 Filipino boxer Manny Pacquiao to face Floyd Mayweather in what will be the most lucrative fight in boxing history.