Fresh allegations of chlorine gas attacks on opposition areas of Syria are a reminder of how desperate conditions in the country remain. Chlorine, despite not technically being a chemical weapon due to its extensive use in manufacturing, is a weapon of terror when combined with the barrel bombs that continue to batter the country.

The Syrian regime must realise that using this tactic will bring greater international attention on their actions, after all, the US-Russian agreement on disarming Syria’s chemical weapon stock was a major junction in preventing more overt intervention, yet, the need to resort to them is a refection of a growing desperation at the direction of events.

Robert Ford, former US ambassador to Syria, warned last week that following the seizure of two major regime strongholds in Idlib, the regime’s days may be numbered.

The dramatic shift in narrative from “Assad has weathered the storm” to “Assad is on the way out” prompts a closer look at the state of the regime and in particular, the perilous position of the Syrian economy to explain how four years of conflict have drained the life out of the state.

In an attempt to make the country “sanction proof”, Bashar’s father Hafez favoured holding large stocks of reserves inside the country. However, these foreign exchange reserves, which stood at an estimated $30bn at the start of the war, have dwindled to $1bn.

Indeed the Syrian Center for Policy Research (SCPR) has estimated losses to the Syrian economy at a total of almost $203bn, equivalent to 383 percent of GDP in 2010, the year before war broke out.

The exodus of displacement, with half the population forced from their homes, international sanctions and the rise of opposition groups, who’ve steadily made progress in capturing 50 percent of the country’s territory and Syria’s border posts, have strangled the country.

In early April, Jordan sealed the last official crossing on its 375km border with Syria, a huge blow as, previously, the Jordanian-Syrian free zone turned over about $1.4bn a year before the war began. According to Al-Watan, Syria’s exports in 2014 were worth just $1.8bn, down from $11bn in 2010.

The regime is taking desperate steps to slash imports and prop up exports. Yet last week, the dollar accelerated to its highest level on record against the Syrian pound. According to Reuters, the dollar’s rise has boosted inflation which is officially at 120 percent but is probably much higher as people bet on the certainties of the dollar against the uncertainties over the regime.

The decline of the Syrian economy could become a vital factor in whether the Assad is able to stay in power. Last year Jihad Yazigi, editor-in-chief of the Syria Report, warned that “the government doesn’t have any meaningful income any more”.

Workers’ conditions have collapsed and unemployment is reportedly at 58 percent, with the struggle of younger components of the workforce a major issue prior to the crisis and in fact linked to its original cause.

The growing financial crisis has seen the regime double the cost for issuing passports through Syrian embassies and cancelling the security clearance required to issue them, decisions that the Syria Report described as highlighting “its desperate quest for new foreign currency earnings”.

Chatham House’s Christopher Philips described how the regime is “cutting subsidies and raising taxes in an effort to keep the war going”, surely unpopular moves that will undermine support among those who’ve been loyal to date.

The state of the Syrian economy has been neglected as the media has focused on the emergence of ISIL, perhaps the richest “terrorist” group in history, which a recent BBC documentary described as “brutal billionaires”. Of course a lot of money that ISIL is making, particularly taxes and the sale of natural resources, would have previously gone to the coffers of the regime.

Running out of money

In addition, as part of the wholesale outsourcing of parts of fighting to militiamen and allies, the regime has taken on a large additional financial burden and it will be interesting to watch for tensions between Hezbollah fighters, who are paid in dollars, and Syrian soldiers, who are getting rapidly depreciating Syrian pounds.

Russian and Iranian loans and the black market can’t turn around the decline of Syria’s economy, they can only slow it down, and with the International Crisis Group’s latest Syrian predictions showing a bleak future of conflict and fragmentation Assad may well run out of money to keep his rule afloat.

The shattering of the myth of Assad’s stability is told in the symptoms displayed in the economy’s flatlining. With the latest attempt at UN-mediated talks – Geneva III – scheduled for May 4, it will be interesting to see if Syria’s financial crisis means that they will come to the table for the first time serious about finding an end to a conflict that is destroying the country, or whether a more desperate regime will instead resort to more widespread use of chlorine gas to try and kill its way to survival. 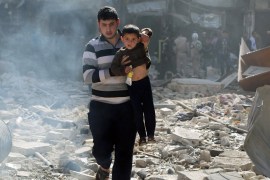 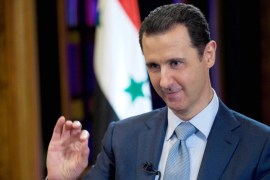 The futility in trying to hold Bashar al-Assad to account through media scrutiny.