In February 2013, the New York Times’ Thomas Friedman made a curious prediction: that Mexico would beat out India and China as “the more dominant economic power in the 21st century”.

Descending briefly upon the city of Monterrey, “Mexico’s industrial/innovation centre”, Friedman determined that, despite prevailing problems involving “drug cartels, crime syndicates, government corruption and weak rule of law”, something remarkable had happened: “It’s as if Mexicans subconsciously decided that their drug-related violence is a condition to be lived with and combated but not something to define them any longer.”

According to Friedman’s unique access to the Mexican psyche, the new national self-identity involved free trade agreements (Mexico had signed “more than any country in the world”!) and attendant phenomena such as dismally low wages (phrased more euphemistically, of course).

Never mind that the North American Free Trade Agreement (NAFTA), which came into effect in 1994, has played a crucial role in fuelling not one but all of the problems listed by Friedman – which would seem to hint that his fit of neoliberal ecstasy was perhaps a tad out of place.

In a new book called A Narco History: How the United States and Mexico Jointly Created the “Mexican Drug War”, Mexican novelist Carmen Boullosa and Pulitzer-Prize winning historian Mike Wallace document NAFTA’s passage as an essential godsend for the drug trade, the lucrativeness of which has greatly exacerbated official corruption.

The aftermath of the agreement, the authors note, saw the number of Mexican farmers living in poverty increase by one-third, with two million of them eventually forced to abandon their land.

The rampant dismantling of rural livelihoods was due in part to the fact that US agribusiness, “having zero qualms about ideological inconsistency, remained heavily subsidised”, while Mexican subsidies for small farmers were forcibly removed along with tariffs and quotas on agricultural imports. “Free trade” indeed.

Many remaining farmers “found the burgeoning market for marijuana and poppies their only avenue to surviving on the land”, while the swelling mass of urban unemployed provided the drug cartels with fertile recruiting ground. And the NAFTA-induced surge in cross-border traffic simplified the “insert[ion of] narcotics into the stream of northward-bound commodities”.

Obviously, NAFTA didn’t create the drug business in Mexico, nor did it single-handedly spawn the calamitous “Mexican Drug War”, which officially commenced in 2006 and in a matter of six years eliminated an estimated 70,000-109,000 people.

But it’s a prime example of how a century’s worth of US policies and cross-border machinations have exacerbated narco-activity under the pretence of curbing it.

Boullosa and Wallace argue that the very denomination “Mexican Drug War” is deceiving given its joint construction by Mexico and its domineering northern neighbour – a process that kicked off in 1914 with the United States’ proscription of narcotics and the conversion of the US-Mexico frontier into a natural gateway for illicit substances.

Over the years, US haranguing of Mexican authorities to crack down on narco trafficking ignored the root of the problem – US demand – and produced a succession of seemingly counterproductive effects. The heavyweights of the drug trade, for example, ended up ever more empowered as lesser contenders were weeded out.

Other opportunities for irony also abounded. Not long after the Mexican government racked up US Cold War brownie points by using its anti-drug mission to go after suspected leftists and other troublemakers, an idea dawned on the American creators of the Iran-Contra affair: Drug lords inundating the US with illicit substances via Mexico could also inundate the right-wing Nicaraguan contras with weapons and cash. Again, “zero qualms”.

Now, 101 years after the US initially declared war on drugs in 1914, you’d think the country might have noticed that it’s not exactly working out.

But as Boullosa and Wallace demonstrate, there are potent forces pushing for a continuation of business as usual. The US Drug Enforcement Administration, they note, would “be hard-pressed to justify its annual budget of roughly $2.5bn if the legal ground shifted beneath it” towards drug decriminalisation.

Arms manufacturers, too, have made a killing off of the southward flow of weapons, both to the Mexican drug cartels – which are awash in American-made arms – and to the Mexican state, to battle the cartels.

As of the mid-2000s, according to Boullosa and Wallace, there were no fewer than 6,700 licensed gun dealers along the US-Mexico border. And US security assistance to Mexico wouldn’t be complete without lucrative contracts to American firms like Northrop Grumman.

Also rooting for a perpetuation of the status quo, the authors write, is the “mammoth incarceration complex [in the US] that … will likely resist any diminution in the production of felons, its lifeblood”.

The modern “Mexican Drug War”, meanwhile, is a misnomer in more ways than one. It’s not a war on drugs, which continue to reach the US in the very same quantities. It’s more a war on Mexico’s civilians, who have served disproportionately as victims of the state’s hyper-militarised response to drug cartels – the same cartels with whom elements of the state are perpetually in cahoots.

Boullosa and Wallace note that when Felipe Calderon, former Mexican president and co-father of the current war, met with US ambassador to Mexico Antonio Garza prior to assuming office in 2006, the ambassador encouraged him in his designs for a full-out showdown with the narcos:

“Indeed [Garza] warned that if Calderon wanted to attract the investments needed to jump-start Mexico’s economy, ‘foreigners and Mexicans alike had to be reassured that the rule of law would prevail’.”

For the moment, the rule of law doesn’t appear to be looming on the Mexican horizon. However, if the investor class can be sufficiently distracted by prospects for exploitation in a country in which nearly half the population lives in poverty, Mexico just might fulfil the Friedmanian dream.

Look out, India and China. 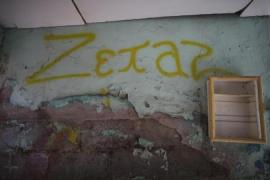 There are groups more depraved than ISIL